Bandai Namco has uploaded many screenshots and character art. These can be found in the gallery.

This weekend is the 'Sword Art Online Beaters’ Meeting 2019' in Akihabara, Japan, where among other series fan events, more information has been shared for the upcoming RPG Sword Art Online: Alicization Lycoris. Bandai Namco has posted a new trailer for introducing a new original character: Medina Orthinanos. The trailer description also gives us our first official confirmation of a release year for the game; it is set to release in 2020.

During the event, Eugeo's voice actor Nobunaga Shimazaki also shared that "There is a route where Eugeo lives", indicating the game will have alternate routes or scenarios from the anime storyline, though details are unclear at the moment. [Thanks GamesTalk]

A second key art for the game was also posted, which includes the newly announced character.

Additionally, Dengeki PlayStation debuted gameplay for this RPG, showcasing both exploration and combat.

Check out the trailer and livestream recording below.

Uncover the journey of a new original heroine in the upcoming game SWORD ART ONLINE Alicization Lycoris. Animated by a strong will to clear her family name, the mysterious Medina Orthinanos will cross path with Kirito in Underworld. Join the adventure in 2020: http://bnent.eu/SAOAL

Sword Art Online: Alicization Lycoris is set to release for PlayStation 4, Xbox One, and PC in 2020. You can find the announcement trailer and information here. 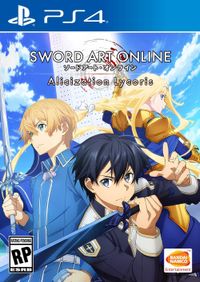