Level-5 has announced that Yo-Kai Watch 4++ will release for PlayStation 4 and Nintendo Switch on December 5 in Japan. A paid downloadable update will also be available to Nintendo Switch players who own the original version of the game, which released in June for the region.

This rerelease includes multiplayer, new areas, new Yo-Kai, and new boss encounters. Gematsu has translated the details from the official website about the additions found in this version of the game, and we've included their translation below.

In addition to local correspondence multiplayer with nearby friends and family (only supported in the Switch version), you can also play with distant friends via the internet. Up to four players can play together.

In multiplayer, players take control of a yo-kai and work together with friends to battle enemy yo-kai. Strong bosses will appear, so form a strategy and take on the challenge.

Additionally, Sproink awaits as a boss yo-kai in the bath house. Fight against him alongside friends in multiplayer.

New yo-kai set to appear include:

Plus more to be added in the future.

Yo-Kai Watch 4 originally released for Nintendo Switch in Japan on June 20. Level-5 confirmed at Anime Expo 2019 that the game will be released in Western markets, but no other details have been confirmed. You can find the short PlayStation 4 version teaser here. 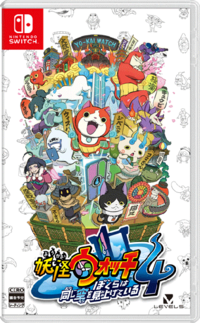