Kadokawa Games has revealed three new Metal Max projects at an event held today in Japan to gear up for the series' 30th anniversary in 2021. The first project that will come the soonest is Metal Max Xeno Reborn, which will be released for PlayStation 4 and Nintendo Switch this Winter in Japan.

Metal Max Xeno Reborn is a full remake of Metal Max Xeno that was released for PlayStation 4 and Vita in April 2018 in Japan and September in the West; everything from graphics engine to gameplay systems is being reworked here. The combat dog Pochi, which appeared in many past Metal Max games but not Xeno, makes its return here. Random battle encounters are also going to be replaced with groups of monsters that will roam the fields and trigger seamless and active battles.

The second project revealed by Kadokawa Games at the same event is Metal Max Xeno Reborn 2, which is also coming to PlayStation 4 and Nintendo Switch later in 2020. This will be a brand-new title that goes west from where the first Reborn game took place, with "Hard" and "Survival" as the game's themes.

The third and last project announced at the event is Code Zero, a working title currently still under the planning phase with no platforms or release timeframes confirmed yet. It is said that with this project, they will go back to the first Metal Max game released on NES and reconstruct the series from its origin point. 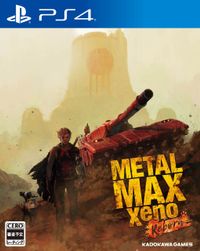