Announced last July, Atlus has finally seen fit to release a trailer talking about pretty much everything you would ever care to (or not care to) know about this RPG that I like to call the spiritual successor to Radiata Stories.

The video focuses mainly on the time traveling aspect of the game, where you are jumping from one point of history to the next, ala Chrono Trigger, restoring the world to its proper form, as well as the combat system which revolves around a 3x3 grid that includes things like stat bonuses depending on where you stand. Here's the video. Just... try not to fall asleep listening to this dude's voice.

Radiant Historia is set to be released in North America on February 22nd, 2011 for an MSRP of $34.99. If you want to be a part of something fun, you can help Atlus USA decide what the cover of the soundtrack of piano arrangements of selected songs from the game that will come bundled with the game when it is released. You can vote on this page, can vote as many times as you want, and you have until next Friday (January 28th) to decide. 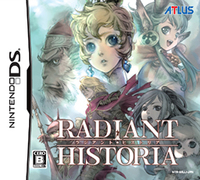