Keybol Games and Drix Studios have announced that story-driven, card-based RPG Grand Guilds will launch for Nintendo Switch and Steam in Q1 2020. The game will also head to PlayStation 4 and Xbox One at a later date.

Grand Guild ran a KickStarter campaign in recent months, and a demo is available to download.

After a year-long mission, Eliza returns to the seemingly normal city of Ozryn when suddenly a horde of mysterious creatures set fire to the streets. Upon repelling the enemies, Eliza and her guild strive to discover where the attackers came from, only to realize that the phenomenon happened all over the continent... all at the same time. With her guild's reputation on the line, she takes it upon herself to find and capture whoever is behind the attacks. It is up to Eliza and her trusted guildmates to discern the true motive behind the unusual assault before the other guilds of Irin suffer the same fate, or worse. 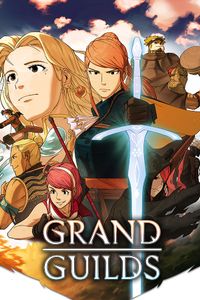