Idea Factory has updated the site for Arc of Alchemist, introducing three new characters, offering some information on exploring the desert, and detailing some of the ways players can use the base system to strengthen their party and prepare for battle.

Arc of Alchemist will launch in North America on January 30, 2020 and in Europe on January 31, 2020 for PlayStation 4 and Nintendo Switch. Arc of Alchemist will be a digital title in North America for both platforms. In Europe, the game will be available digitally on Nintendo Switch while the PS4 version will have a physical and digital release.  If you missed any updates, you can check out the preview trailer, announcement details or the battle system updates.

Details and screenshots are below.

Problem-Solving with Lunagear: Wield the true power of the Lunagear and use 4 different Orb elements to solve various puzzles in the Desert of Beginnings. Certain puzzles will require players to combine two elemental Orbs to progress, so experiment with the different possibilities!

Mechanical Gimmicks Galore: As Quinn and her squad explore the Desert of Beginnings, hidden mechanical gimmicks will emerge to block their path, explode on contact, and more! Keep the team safe by recognizing signs of these traps.

Use Gimmicks to Your Advantage & Find Enemy Weaknesses: Players will notice special gimmicks that can only be activated with a Lunagear. Use these gimmicks to your advantage to light up lamps and also weaken larger and stronger mechanical bosses!

Because of his adoration of Quinn, he dotes upon her excessively, much to his own detriment. However, his skill as a knight is unparalleled and he's attained several victories in battle exercises.

A knight who supports Vice-Captain Axel. Previously, she had served as his squire. She is one of the team's most competent members, recognized for her common sense. She also takes on the role of admonishing Axel when he gets out of hand. In secret, she harbors feelings for Axel, but the path is steep.

As part of the military clergy, she is in charge of treating injured troops hurt by the perilous journey. She is skilled at sewing and cooking, and is known by all for her kindness. Her patience allows her to talk down even the self-willed Sandra. Micah refers to her calming ability as a "maternal power", from which Rune takes great pride.

The Base - An oasis surrounded by never ending desert

Build a Foundation: Use the Base to prepare for the long journey ahead of you. Set party formations, train, construct buildings, and heal.

Expand and Conquer: Select from a wide range of facilities to help strengthen your party members. For example, create a Maintenance of Weapons Facility to unlock powerful weapons for battle!

Set Your Squad's Formation: Strategize on how you want to lead your party by changing their tactics. By default, your squad is set to "Free Will" where they will fight and/or defend as needed. However, you can customize their AI commands to attack the same target you're hitting or even have them play more passively. Players can also equip specific item sets that specialize in things like farming for materials or battling tough enemies.

Buy, Sell, Swap: Players will need to buy new items as they progress through the Desert of Beginnings and failing to do so will have major consequences. As you explore, players will also amass a plethora of items that can be sold for currency. Grab all the items you can, as you will need to upgrade a variety of things with money, including the expansion of your base, attaining stronger weapons, and boosting specific stats for each character.

Train and Win: Training is a vital feature where all the playable characters can learn new skills and upgrade them. Learning and upgrading skills will also cost in-game currency, so check your balance before spending!

Arc of Alchemist Base Screenshots 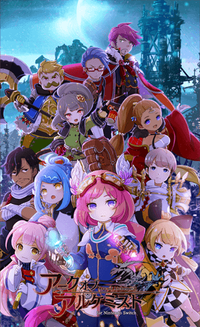