Koei Tecmo has published more new information for Nioh 2, covering more stages, characters, and Guardian Spirits that will make an appearance in this game. The main highlight goes to the character Saika Magoichi, who also appeared in the first Nioh but has some differences here.

Similar to Hattori Hanzo, Saika Magoichi is a name given to the current leader of the Saika mercenary group. The Saika Magoichi who appears in this game is Suzuki Shigehide, who held the title in this period before Suzuki Shigetomo inherited it in Nioh 1. You will fight him at the Ishiyama Honganji stage, which is based on the historical battle where Oda Nobunaga launched a campaign against the Honganji.

The Guardian Spirit of the Saika, Yatagarasu, is also returning. Just like Shigetomo in the first game, Shigehide can also attach the raven's wings to give him an advantage in the duel against you. Once you are able to equip the Yatagarasu, it can launch a Guardian Spirit Attack by charging forward and then flying higher to shoot fire shockwaves in three directions. 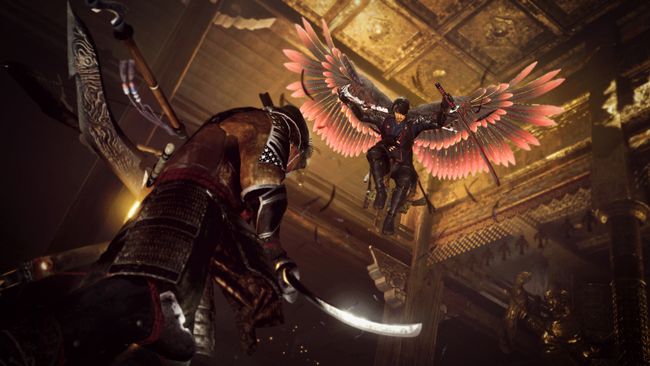 You can find more new screenshots for Nioh 2 below, which shows fights against the new yokai monsters Gyuki and Iron Rat, as well as new artworks for Azai Nagamasa's Odani Castle stage. Nioh 2 will be released for PlayStation 4 on March 13 worldwide.