Nintendo and The Pokemon Company have released a new trailer for Pokemon Mystery Dungeon: Rescue Team DX, showcasing several elements of the game such as dungeon trekking, creating your rescue teams, combat, and bosses.

The Pokémon Mystery Dungeon™: Rescue Team DX game on the Nintendo Switch system plunges you into the role of a Pokémon faced with mysterious dungeons to explore, joined by a daring rescue team of Pokémon friends with unique personalities of their own. Explore gorgeous watercolor-inspired environments as an intriguing story unfolds that thrusts you into the center of a quest to make the world of Pokémon a safer place.

In addition to Pokémon whose evolved forms hadn’t been discovered yet, Mega Evolved Pokémon will also appear in the Nintendo Switch installment of the game. Encounters with over 400 Pokémon await you, including Mega Evolved versions of fan favorites such as Venusaur, Charizard, Gengar, Sableye, Altaria and Gardevoir, among many other surprises waiting to be discovered!

Throughout your quest, you’ll need to plan strategically to build a well-balanced team of Pokémon to challenge any foes you might face. Your Pokémon will have a range of moves at their disposal, and each one can learn four moves at a time. Some moves, like Thunder Shock, allow you to damage foes directly in front of you, while other moves can heal your team members. Some moves like Growl and Smokescreen provide special effects that interfere with your opponents’ attacks. It’ll be up to you to prepare wisely and think tactically as you proceed.

The layout of the mystery dungeons you explore will change each time you visit, and you’ll find different helpful items along the way. Blast Seeds let you dish out big damage to foes, Gravelerocks let you attack from a distance and Oran Berries will recover HP for you or your team members. Luckily, you can teach your Pokémon useful abilities called rare qualities by feeding them Gummis. Rare qualities have good effects for all your team members in a dungeon, like “Small Stomach,” which allows certain foods to fill your belly quickly, and “Narrow Focus,” which guarantees moves used in a corridor will land sure hits. Some rare Pokémon may already know rare qualities when joining your team, so keep your eyes on the lookout!

Along your journey you’ll encounter rescue team camps that are in a variety of natural locations. Pokémon who have joined your team can stay at camps, and you’ll also be able to power them up and change their nicknames. It’s a great place to regroup and plan for the challenges that await.

The free demo version of Pokémon Mystery Dungeon™: Rescue Team DX is available now in Nintendo eShop on Nintendo Switch, which allows you to try an early part of the story, as well as carry your save data over to the full version, once purchased upon release. For a limited time, My Nintendo members can earn up to 600 My Nintendo Gold Points – twice the normal amount – when pre-purchasing the digital version of the Pokémon Mystery Dungeon™: Rescue Team DX game through Nintendo eShop or Nintendo.com (where available).* 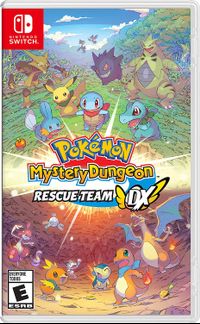