Nippon Ichi Software has revealed Shoujo Jigoku no Doku Musume, an action RPG where Hell is created by the anxieties of people. It is set to release in Japan on June 25 for Nintendo Switch and PlayStation 4. The official website is here.

Find a trailer, our translation of the story & gameplay details, and screenshot set below.

Delusions are created by people's suffering thoughts. They can be produced with strong feelings and desires regardless of whether the person is alive or dead. And that, in turn, creates Hell. The protagonist is a living person who gets lost in Hell, and his body is stolen by Doku Musume, a dweller within Hell. With two spirits in a single body, the protagonist will begin to purify the Hell in order to return into the living world. Why did you get lost there? Who are you? Who is Doku Musume? This is a story about hell, owned by "you".

Protagonist: A "living person" who has gone astray from the living world to Hell. You have no memory of why and where you came from, and you will cooperate with Doku Musume in purifying Hell in order to find a way to return to the living world. You can choose the protagonist's gender to be a male or a female.

Doku Musume [lit. Toxic Girl] (voiced by Manami Numakura): Although she was originally a Delusional who fell into Hell, she stole the Protagonist's body which caused the latter to have two spirits in one body. In this world setting, toxic girls are Delusionals that are supposed to fuse with a living person. She also has another name, but she doesn't remember it herself.

White Doku Musume (voiced by Yuki Kawakami) and the Girl in Mourning Dress (voiced by Mina Takagawa):
A pair of girls who are working on purifying Hell in the same manner as the Protagonist: two spirits in a single body. Although they seem to be involved in all things in an annoying way, they will also give helpful pieces of advice. The Girl in the Mourning Dress is thought to be a living person just like the Protagonist, but her reason for coming into Hell is still unknown.

Hell will have various sceneries generated by girls; each of them has her own story and background. These are a few examples of them:

Hell will have Toxic Swamps generated by the girls' thoughts. In order to return to the living world, the Protagonist must purify Hell; to do so, you cooperate with Doku Musume who can collect poison from the swamps.

However, there are other Delusionals that loiter around Hell and are after your body. They will attack you with various methods from long-range shooting, close-range melee, to even hiding inside swamps. They must be exterminated by attacking with the gathered poison.

When Doku Musume gathers poison from swamps, she can also defeat surrounding enemies and obtain new weapons during the process. The story will progress as you continue to purify Hell; it will also have multiple branches depending on your choices during conversations with Doku Musume.

Hell has a mysterious radio channel called Higan Radio where you can listen to the voices of girls who had created their own Hells. Other than providing information about toxic swamps that show up in the Hell, you can also listen to the agony of the girls who formed the Hells. 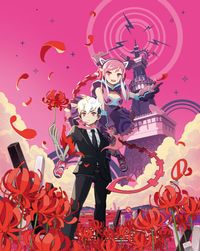