KonoSuba: God’s Blessing on this Wonderful World! Plus launches in Japan for PlayStation 4 and Switch on August 27

Entergram has revealed that they will release KonoSuba: God’s Blessing on this Wonderful World! - The Labyrinth of Hope and the Gathered Adventurers - Plus for PlayStation 4 and Nintendo Switch in Japan on August 27. This is an enhanced version of the dungeon RPG based on the popular light novel which was originally released for PlayStation 4 and PlayStation Vita in June 2019.

The Plus edition will add numerous features not seen in the original release, which are as follows:

You can find screenshots for this Plus release of the KonoSuba dungeon crawler right below. The original release on PS4 and Vita was never localized to the West, and an English localization for this enhanced release has not been announced either.

KonoSuba: God’s Blessing on this Wonderful World! announced for PS4 and Vita

The World Ends With You: Final Remix launches on September 27 in Japan 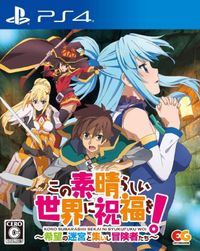