Within the games industry, the term ‘cyberpunk’ has become increasingly popular and the market is flooded with games offering what developers feel is the real cyberpunk experience. It’s safe to say that the word has become less of a genre defined by politics and the struggles of the underrepresented and more of a descriptor used to define games with a slick, technologically advanced aesthetic. With Gamedec coming to PC later this year, I was excited to test it out to see if this ‘adaptive cyberpunk RPG’ would fall victim to the cyberpunk curse or if it would rise above the rest and provide a truly nuanced experience.

Gamedec is a traditional isometric, point-and-click game. I played as a man simply called Gamedec (short for game detective), and my job was to solve the crimes committed in various virtual worlds. Gathering clues adds to the codex which tracks anything from characters met, to organizations and viewpoints on the virtual world, gaming, etc. From there you can make deductions based on the information you have, and those deductions decide the path you’ll take and which actions are available to you. Having less info means there are less avenues to investigate. While moving through an investigation, nothing feels right or wrong. Rather it feels like a genuine experience of simply going on what you know. I never felt like I was chasing the wrong lead or that the game was directing me to the right conclusion. It was a pretty natural experience.

Starting out, Gamedec immediately reveals what kind of world it’s creating. Just from moving around the apartment I started in, I was able to see just how adaptive the game is. Choices are vast, although simplistic, and each time a different path was taken, the game changed and provided even more options. Stylistically, the apartment is what you would expect from a cyberpunk video game in 2020. Everything was automated, machines were sentient and I had an AI companion to sort out my housing needs.

This is where I started to notice a somewhat concerning pattern. Gamedec runs on a rather strict binary in terms of gender and ideology. As a male character, my only option for an AI assistant was a conventionally attractive, shapely blue android named Bliss. Whether this is the game's design or simply what was available in the preview, it struck me as odd why I was only able to have a woman as an AI and not a man or even something not human (a choice in the game that was greyed out to me).

Conversations with side characters are full of indulgent references to sex, existence, and gamers. It’s less nihilistic and more as if the game is saying ‘this is what it’s like to be a Cool Guy...who also plays games’, with offensive terms and bizarrely placed moments of misogyny included.

Exploring this virtual world felt like working through a man's power fantasy. While most characters felt distinct on a surface level, the game made sure men were aggressive and confident while women were sexy to the point of objectification, and they could only discuss the ways in which sex rules society. The few characters who went against this norm ended up feeling weak and undeserving of status in the simulation.

I had major issues with the world Gamedec is building, but I will say that it’s detailed in a way I wasn’t expecting. With the many many branching paths I could take, Gamedec holds up on the claim that choices and consequences matter. Playing recklessly or trying to push my way through every situation aggressively didn’t always work. Being a kinder detective in certain situations gave me more insight and opened more deduction paths. The dialogue options sometimes felt repetitive, but generally, the branching dialogue system worked effectively. While some aspects of the deduction chart and skill tree felt a bit stiff, it could have easily been because I was simply playing a preview where certain aspects of the game weren’t available to me. At the end of the day, my choices directly affected my playthrough. That I can appreciate and it’s the one part of the game I’m curious to see when it’s fully released.

Gamedec is an interesting mix of highly interactive dialogue trees and ridiculously dated writing. Taking on a TTRPG style of character origin and offering direct consequences to the type of character you play is a good move. With those two features, I can only imagine the finished product being a robust game with high replay value. I’m simply on the fence about how the story evolves, or devolves. The lack of interesting characters and the insistence that sex dominates each conversation is concerning. The surface-level aesthetic or design of the world was a bit disappointing. While I spent most of my time in one world, I am curious as to how the rest of the game will play out, and if the narrative grows and matures throughout. There’s space for this game to become something big, but major changes need to happen. 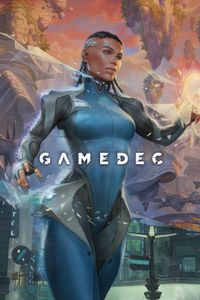