I cannot recall the last time I played a game quite like 13 Sentinels: Aegis Rim. Vanillaware’s latest project has been long in development for some time now, with its earliest reveal dating back to 2015. What was once considered vaporware to many will finally hit western territories in about a month. I’ve been playing through the final English release for a few hours, and it didn’t take long for me to realize that this game is something special.

Those expecting an action RPG along the lines of Odin Sphere or Muramasa: The Demon Blade should be aware that 13 Sentinels is unlike any other game that Vanillaware has ever done. It is primarily an interactable visual novel adventure; a lot of the game is simply speaking with characters and watching scenes play out. There are some real-time strategy gameplay segments here and there, but those seem to take a backseat compared to the main meat of 13 Sentinels - the story and its characters.

Since this is such a narrative heavy game, it is difficult to speak about it without mentioning what it’s all about, so there will be minor spoilers in this piece. I can only talk about the first handful of hours, but so much has already happened in that timeframe. It went to places that I didn’t think it would early on.

If you’re even the slightest bit curious about 13 Sentinels, I recommend just getting it and playing it with as little knowledge as possible. I’ll be real with you; I’m just going to be gushing about it for the rest of this piece.

...I repeat.
We interrupt this program to bring you an important emergency broadcast.
A large unidentified object has crash landed in the city.
It is headed north toward Kasumi-cho, destroying everything in its path.

Upon starting 13 Sentinels, a cold cut into a chilling radio broadcast settles in. Giant alien creatures have begun their invasion in Japan. As crowds of people flee for their lives, a lone girl in a school uniform takes a stand. With a sweeping motion across her right thigh, the word ‘START’ glows brightly and suddenly, a humongous robot phases into existence behind her. An orb surrounds the mysterious girl to teleport her inside the robot. She is one of the chosen few that can fight back for humanity’s survival.

There is a strange charm to 13 Sentinels that overtook me as I went through its opening prologue section. Spanning roughly three hours, I was captivated in how it slowly took a familiar sci-fi premise at first and further complicated it in ways that didn’t feel forced or tacked on. Before the game fully opens up, 13 Sentinels walks you through a brief 30-45 minute introductory episode for seven protagonists: Juro Kurabe, Iori Fuyusaka, Takatoshi Hijiyama, Natsuno Minami, Megumi Yakushiji, Shu Amiguchi, and Ei Sekigahara.

A lot of my early appreciation for 13 Sentinels comes down to organic narrative flow. It feels like an inevitable descent into chaos… in a good way. Players all start off with Juro’s story, for instance, so it’s tuned to be one of the more straightforward introductions at first; his opening scenes are easily understandable and digestible from the get-go. There are a few plot hooks that raised my curiosity for sure, but in the end, Juro (accidentally) summons a robot. End scene.

13 Sentinels serves as a freeze-frame of simpler times; what I'm saying is I got nostalgic seeing a VHS tape.
It doesn’t take long for the developers at Vanillaware to start ramping up the intricate story they want to tell. 13 Sentinels is much, much more than a simple tale of robots versus kaiju. I see it more as a cauldron of sci-fi stories that blend together to fill out a narrative that feels limitless thanks to its deliberate usage of time travel as a central pillar of its storytelling. While I’ve yet to see the extent of how well it’s ultimately fleshed out, 13 Sentinels’s prologue shows a lot of promise in its utilization.
Advertisement. Keep scrolling for more

Character relationships tend to feel like they have more at stake as a result. Some characters may travel several decades into the future chasing after someone, while others may go back trying to reverse the tragic fate of a significant other. It works in tandem with the game’s structure of multiple protagonists, because you often see and interact with other protagonists from different perspectives. I especially enjoy that 13 Sentinels seems to be going for a “show, don’t tell” approach to its narrative; just enough context clues are provided to connect the dots on what I think might be going on with certain characters or events.

There were already a handful of times in 13 Sentinels when a character would be subtly introduced in an earlier character’s route. Later on when that character’s prologue starts a few routes later, it would follow-up on their actions as they went off-screen from that earlier character’s segment. Nothing was ever explicitly said to remind me. Instead, the game provided enough bread crumbs for me to reach my own realization naturally and I appreciate that. I imagine this’ll be a recurring epiphany for me.

Although the game’s plot seems like it might be overwhelming to manage, progressing is relatively simple. There are two gameplay “modes” in 13 Sentinels that I briefly brought up earlier - a visual novel adventure part and a real-time strategy battle part.

Vanillaware is known for their amazing backgrounds, but it really is on another level in 13 Sentinels.
Stories in 13 Sentinels are presented in the proper stunning Vanillaware fashion that I’ve come to love. Gorgeous, handcrafted-esque characters populate beautiful 2D landscapes much like their other titles. 13 Sentinels feels a significant cut above in scope though. Every background has a ridiculous amount of detail to it (as to be expected from their other works), but the sheer quantity of unique ones I’ve seen already is a tad insane.

Vanillaware is traditionally known for tackling more historical fantasy settings and 13 Sentinels shakes up that formula considerably. A sizable chunk of its story so far revolves around mid-80’s Japan, so much of it has shown off their prowess in crafting a modern urban city environment. The results are simply dazzling to behold. No matter where, or when, 13 Sentinels’s backgrounds never remained static. Whether it be transportation bustling, vent fans rolling, a TV flickering, or even dust specks flowing from sun rays through a window, it exudes a powerful sense of time and place at any moment. I’m a little awed at how atmospheric it is, even when it’s freely hopping through time periods suddenly at some points.

Before I get too swept up, 13 Sentinels often has your playable character learn keywords through the conversations they have with others. These are stored in their Thought Cloud — usually for further consideration and sometimes when bringing up one of these keywords to another character. You won’t be able to use every keyword with every character you meet though, so there is very little guesswork on how to proceed. It’s all strictly laid out visually in an elegant manner. Even if you did forget to consider a keyword or missed an interaction, color-coded icons at the top right corner provide a subtle reminder that you’ve yet to exhaust all your options at any given time.

Between each character transition in the prologue, there are momentary tutorial sections that teach bits about the combat system in 13 Sentinels. Unlike previous action RPG titles that longtime Vanillaware fans may be accustomed to, 13 Sentinels opts for a RTS approach. Vanillaware has dipped its toes into the genre before with GrimGrimoire, but it’s not quite that either. It’s mechanically more along the lines of Command & Conquer or StarCraft crossed with some Super Robot Wars. Don’t worry, the battle system in 13 Sentinels is relatively simple. There isn’t a high barrier of entry to understand it.

Combat encounters revolve around defending a terminal point from incoming waves of enemies. The protagonists in their Sentinels, the giant robots, all have their own unique strengths and weaknesses that define their roles. Since some of the protagonists may come from other eras in time, generations of different Sentinels are spread throughout the cast. Earlier generations specialize in close combat, for example, while later ones are able to deploy support-focused devices like a sentry gun. These also define the capabilities of their armaments, too. Some Sentinels that have a lot of powerful melee-focused weaponry can usually only hit enemies that are on the ground, so backline Sentinels have to either focus on anti-air measures or open up opportunities for frontline attackers to strike with EMP Stunners to ground aerial units.

Every Sentinel has a basic attack that costs no resources, but most of their arsenal consumes EP. Every attack has a cooldown timer until you can assign the character a different command again, with more powerful attacks having a longer cooldown. Besides firing back on the alien menace, Sentinels can move, repair, or defend to charge their EP. Repairing involves having the pilot exiting their Sentinel for a period of time to recover but it leaves the pilot themselves at risk to be killed if something attacks them. Although battles run in real-time, the menu to select a character’s actions freezes everything, giving players all the time they need to think of what to do next.

Advertisement. Keep scrolling for more
13 Sentinels's settings are similiar to what's seen in visual novels. If you've never read one before, there are tweaks to help enhance your experience.
The aesthetic surrounding the battles themselves carry a cool sci-fi vibe, though I think it has been the weakest part of an extremely strong first impression far. They aren’t necessarily bad; it’s more that everything else besides it is relatively so good. I do enjoy the awesome video animation clips that play when you hover over an attack, but the actual visual representation in battle feels lackluster to the oomph in that small clip.

What befuddled me the most about 13 Sentinels’s battles was their disruptive implementation throughout the prologue.

Since they always popped up in-between character transitions, the characters I barely got introduced to are the main focal point of them. My problem stems in that they seem to take place way further in the storyline; thus, it has this odd issue where it slightly spoils some of the payoff in the more turbulent relationships established early on. Characters locked in an internal strife in a prologue scene are all of a sudden buddies in the battle section that follows up after. It’s perhaps the one significant thing that irked me the most in my entire playthrough of 13 Sentinels’s early hours. Other than that, my time with this game has been outstanding so far and I’m curious to see how battles will evolve throughout it.

13 Sentinels: Aegis Rim is shaping up to be the most ambitious title Vanillaware has ever made. It’s clearly attempting to tackle a narrative in a way that, I feel, only video games can achieve. I’m very much looking forward to seeing what the rest of this game has to offer because if its first few hours are anything to go by, players are in for one hell of a ride. My hope is that Vanillaware not only delivers an amazing sci-fi story with 13 Sentinels, but also a well-realized plotline that does all of its characters justice. Numerous sensitive themes and topics have already been introduced and I am crossing my fingers that Vanillaware can stick the landing in a thoughtful way. I’m impressed by what I’ve played, yet also somewhat scared because my expectations are so high now.

If you're curious to see more of 13 Sentinels: Aegis Rim, I've included a little gallery below to show off more of this lovely game. It launches in the west on September 22, 2020 for the PlayStation 4. 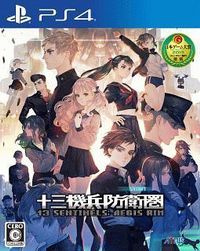