A few months back, Square Enix reached out to us to ask us if we were interested in covering Romancing SaGa Re;Universe - presumably in no small part due to how well we received SaGa Scarlet Grace: Ambitions late last year. Normally I'm not much of a mobile game aficionado - the exceptions being Dragalia Lost and Pokemon GO - but I felt like it was worth giving the title a shot if nothing else. While I enjoy the game, and I do believe there's a lot to like about Re;Universe, I find it incredibly hard to recommend anyone should get invested in the game themselves, at least not on the global servers. But let's talk about the game itself a bit first.

Re;Universe adapts much of what makes the SaGa series unique into a mobile format. You can pull characters from the series' history to use in your own parties, and indeed using these characters in battle will occasionally award you glimmers that will unlock new abilities, strengthen current ones, and more. The Battle Points system is fairly straightforward - each turn every character on your team will earn a set amount of "Battle Points" that can be used to power up more advanced techniques that your characters might know, though at any time a character will also have access to a basic attack that expends nothing. As you battle, gradually characters will gain Overdrive, and when their respective meters are maxed out you can activate it to buff your attacks - if multiple party members activate Overdrive at the same time, and their specific techniques can combo together, then you can activate a chain where each successive character's technique will deal more damage than the last. 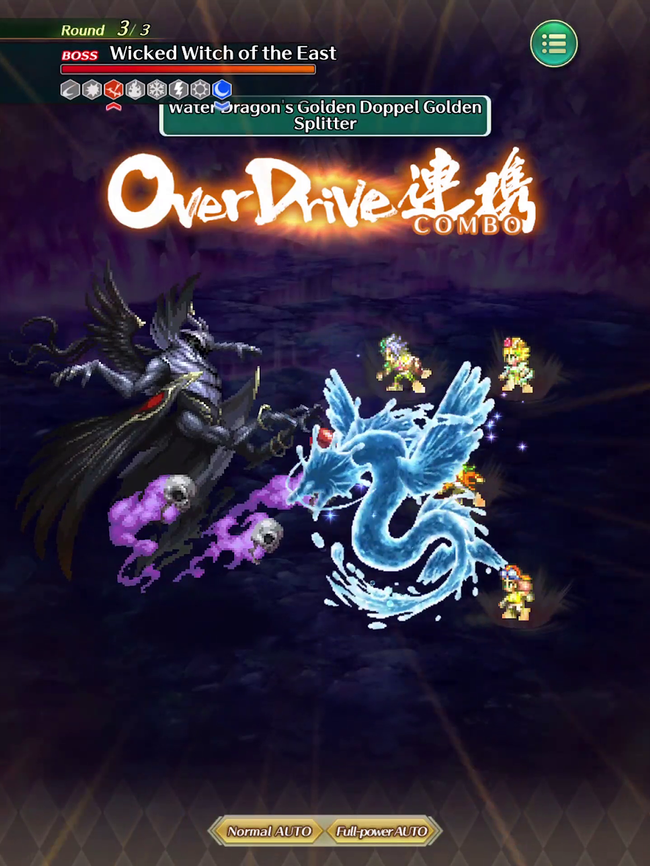 There's a bit more to the battle system - such as enemy weaknesses and resistances, as well as positioning, but the crux of it all is that the battle system itself feels remarkably similar to a more standard SaGa battle system than a mobile RPG's. It's a ton of fun and I don't really have any complaints - if you've played any SaGa game before, you'll find yourself clicking with it almost immediately. Battle missions themselves are short, generally only lasting 3 waves of enemies, but that fits with the dressings of a mobile RPG in the first place, and you still get the feel of a more traditional RPG encounter regardless.

As for the game's presentation - it's gorgeous. Characters are all represented in SNES style sprites without any ugly filtering, and character portraits themselves are gorgeous, whether they be from the series' traditional artist Tomomi Kobayashi or guests. As for the game's story, although I have not yet played Romancing SaGa 3, from what I understand Re;Universe is directly connected to that one's story. While it's by no means particularly amazing - I can say with confidence that you won't be lost if you start playing without having touched the prior Romancing SaGa entries. 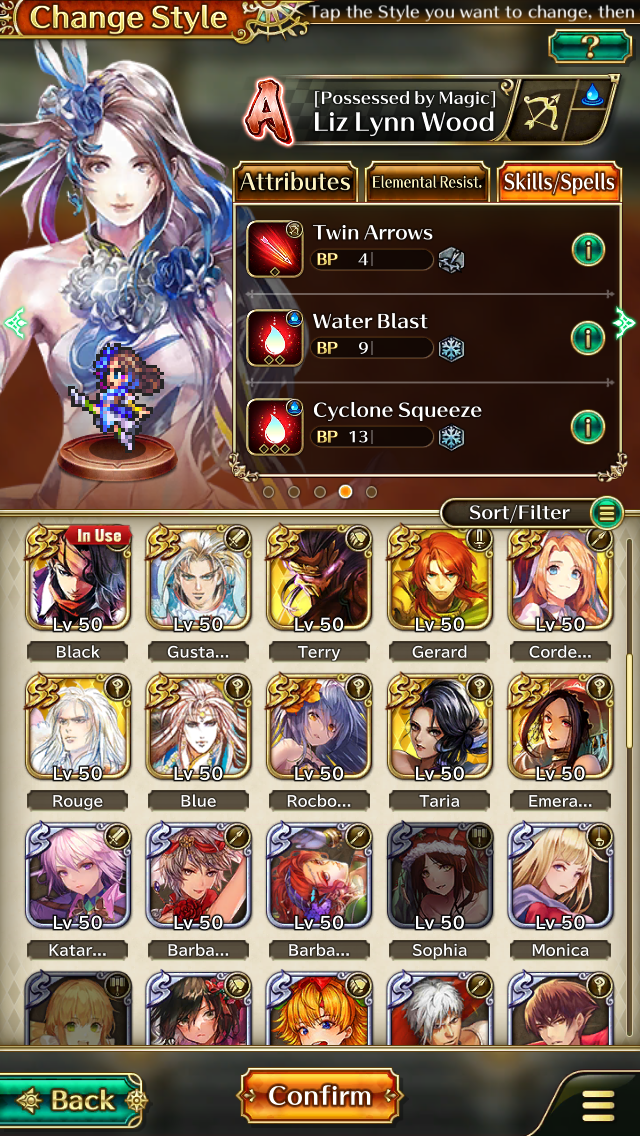 Now here's where things get considerably tougher to talk about - support. While currently, the game is awash with support, and the global release is absolutely flooded in banners and login events - this does leave me with more than a few concerns. At least on Android, the game is an Editor's Choice on the Play Store - but despite this, you won't find it anywhere near the Top Grossing chart. The game gives you more than enough free rolls from login bonuses and the like, as well as plenty of opportunities for entirely free "SS" rank characters, that I wonder exactly how they intend to get people interested in spending money on the game themselves. Right now, just going through the login bonuses every day is a bit of a slog, with well over half a dozen populating your screen on start-up, and with no real way to skip through them with any efficiency. Even when that dries up, the rates for pulling these high-tier units are very generous compared to other mobile games - so how long will players manage to last without spending any money?

This wouldn't necessarily be a major issue, but while I'm sure folks are playing Re;Universe right now, and maybe they're even sticking around, I can't help but worry about the future of the game's service in the west. A few years back I interviewed the producer of the then-new global release for Star Ocean: Anamnesis - barely more than a year later the game was discontinued in the west, even though it continues receiving support in Japan. Make no mistake - unless Re;Universe makes a profit over here in the west, I wouldn't be shocked to see it suffer the same fate before long. To me, the deluge of free gear, jewels, and characters are an effort by Square Enix to cement a player base early on, but I don't know how that will work out in the long-run, once the freebies stop, and whether or not these players will continue to load up the game, and whether they will move on to purchasing premium currency. 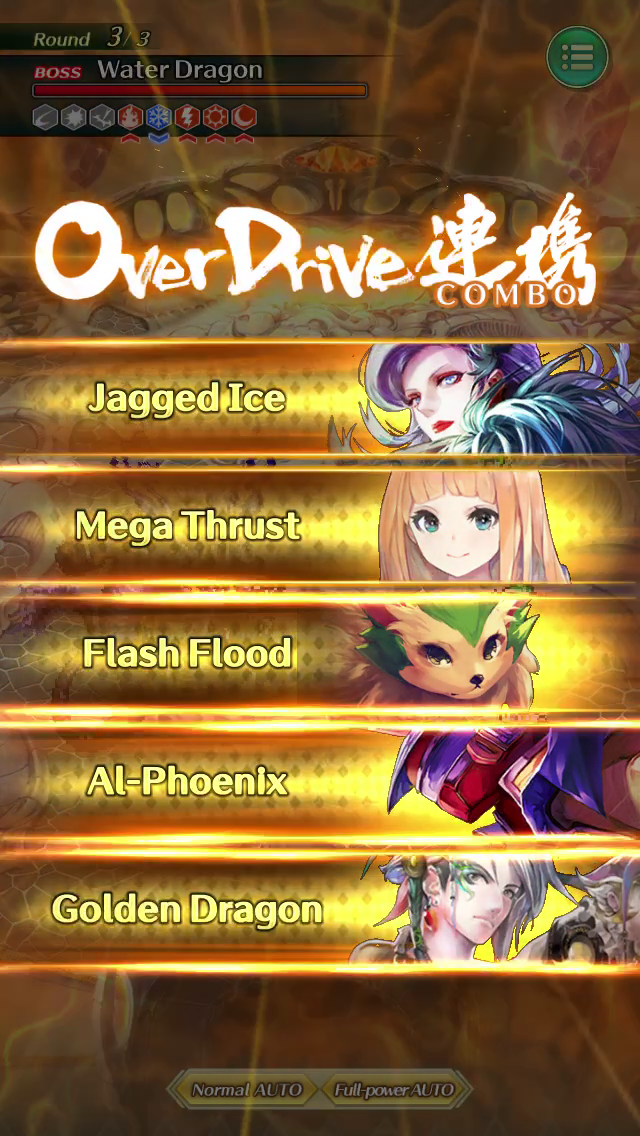 If you're fine with that possibility, then I can say with confidence that Re;Universe is a delightful little time-waster, doubly so if you're already a SaGa fan. However - if you're looking for a long-term mobile investment, I'd be hard-pressed to give the same recommendation. It's a chicken-and-egg problem, I'm aware, but unless Square Enix comes out and guarantees a minimum timeline of support, I can't in good conscience tell players to treat this as anything more than a momentary distraction. I hope I'm wrong because what I've played so far has been an endearing change of pace.