I wasn't booked in to see Square Enix's new episodic adventure game, Life is Strange, at Gamescom. I was standing around their area in the business hall to see the obvious stuff - Kingdom Hearts, a catch-up with Final Fantasy XIV's boss man - but, with a gap in my schedule, I'm excitedly coaxed into a demo of the new collaboration with Remember Me developer Dontnod Entertainment - Life Is Strange.

The RPG Site staff room is often awash with discussion about adventure games and where they stand on our coverage scale. We don't pretend to be scientific about what is or isn't an RPG - we just cover stuff we think RPG fans, like us, will enjoy. On occasion that extends to things like Danganronpa, Phoenix Wright or The Walking Dead - and now Life is Strange joins those ranks. In my eyes, that's pretty good company to keep.

An episodic title for both last and current generation Xbox and PlayStation machines plus the PC, at first glance the title screams 'Telltale'. It has that look and feel about it of that company's successful episodic adventure efforts, but quickly a flavor appears that just isn't present in those titles - and it's a pleasant one.

Max and Chloe, the game's leads, seem to make for a compelling - if unlikely - pairing.

The best word I can reach for to describe the game is one perhaps a touch oversubscribed in gaming currently - indie. By that I don't mean the studio, who last developed disc-based Remember Me for Capcom, nor the publisher, who needs no introduction, but the vibe of what I see.

The soul of the game feels to be infused with the sort of indie spirit reserved for obscure music festivals, and that's doubly interesting when pitched against evidently higher-budget artwork and stylistic choices.

In the demo I see, lead character Max returns to her home town after five years away. Max seems a sort of harmless, malleable type, but her best friend, Chloe, appears the oil to her water. Chloe's bedroom is a mish-mash of posters and eccentricities, the word 'FUCK' scrawled across a US flag that hangs from her wall multiple times over. She's a blue-haired, weed-smoking rebel, and Chloe, after her time away, clearly finds it difficult to reconnect with her.

The two aren't your usual inseparable buddies, it's plain, and their relationship is compelling almost immediately. The writing has a real feeling to it - like these are the type of people I've known - and that's refreshing.

The scenes that play out in the demo aren't life and death, but are more slice-of-life in an appealing way. Chloe's stepfather invades her space when she refuses to turn down her music - which, notably, is from a soundtrack littered with licensed indie music most players will likely have never heard before. When her stepfather arrives, things turn ugly fast - the joint is discovered, and the situation with the highly-strung father figure unravels from there.

The paint-like art style really shines in spite of last-generation limitations.
There's a twist, however - Max can rewind time. Like most adventure games, there's dialogue trees - but you only get one shot at them unless you choose to rewind time and experience the conversation again to drive it down a different path entirely.
Advertisement. Keep scrolling for more

Initially, the stepfather discovers Max in Chloe's room and the situation worsens. To demonstrate the rewind, the situation is pulled back to earlier, Max then directed to find a hiding place - allowing us to watch the scene play out in a different manner from a very different perspective. In another instance, a dialogue choice that upsets Chloe can be reversed with a quick rewind.

It's interesting and unique as a twist, and gives players the chance to explore different arms of a branching storyline outside of playing each episode through multiple times.

There are limits, of course - you can only rewind time within a particular scene. The limit here, for instance, is from the moment Max steps into Chloe's bedroom to the moment she leaves it. While you can rewind and explore different paths within an individual scene, at the end of it you must commit to a path - and as in any good choice-based game, it might bite you later. The idea is to allow players to witness a 'butterfly effect' throughout the story - a seemingly insignificant choice early on might have huge repercussions further down the line.

Aside from typical choice-based dialogue, the moment-to-moment exploration closely resembles Heavy Rain - a game which some of Dontnod's staff worked on. You can move Max around freely and interact with the environment, with lovely HUD elements that emulate her hand-written scrawl popping up to tell you what actions are available.

While the game seems to relish in the mundane and everyday, drama is afoot.
While the base scenes I witness are more slice-of-life, there's deeper, more dangerous things afoot. There's a mystery about a missing gun, an incident where Chloe was threatened by an armed assailant, a missing girl, and the fact that Max, an amateur photographer, seems to have captured at least something of relevance to all of this in her camera.

Photos will play a major role in documenting each player's journey through the branching story, it seems, and appear often. The game's simplistic, painting-styled art is lovely to look at, too, though I immediately get the sense from this PS4-based demo that the game has had some sacrifices made to remain cross-generational.

In these seeds lays the promise of an intricate and interesting story, and that's something most RPG fans tend to love. While the story is provided by the French team at Dontnod, the game has hired on a TV-experienced American writer to ensure everything feels and sounds natural in English and is true to the game's all-American setting.

RPG Site's readership is made up of all sorts of types of RPG gamers, but for those who like a good story Life is Strange could end up being a must-play. It also may be Square Enix's most interesting project in years.

Ultimately the slice of Life is Strange I experienced leaves it still a difficult game to describe, but it is hands-down my surprise-of-show from Gamescom. With a lovely looking painterly almost-cell-shaded art style, solid voice work, an intriguing story and an even more intriguing gameplay hook, it'd be hard indeed to not be interested. Color me cautiously optimistic.

Life is Strange doesn't have a release date yet, but when it does, it'll launch on Xbox 360, Xbox One, PlayStation 3, PlayStation 4 and PC. It'll come in five parts, and once the first launches, the subsequent four episodes will follow on a strict on-a-month schedule. We'll keep our eye on this one. 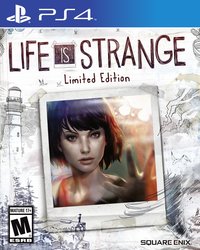