We played Nier Automata and it's amazing

This time last year in our end of year awards we named Nier Automata the surprise of the year. The game wasn't anywhere near coming out back then and we knew little, of course, but the fact that it existed at all was an incredibly pleasant surprise.

It's only fitting that a year on not only is the game a matter of months away but we actually got the chance to play it. We went down to Square Enix's office to try out the demo, out today, ahead of time. We've captured a little footage too. Here's the headline: It's bloody great. There's over 20 minutes of video below, then we'll talk a little more. Deal?

In many ways Nier Automata feels like the fulfillment of the promise of Nier and director Taro Yoko's vision of its universe in the first place. Back in 2010 I described the original Nier as diverse and eclectic but deeply flawed. "On the surface from the opening sequences or perhaps if you merely watched somebody else play the game might seem mediocre and boring, but the interesting mixture of multiple gameplay styles, bizarre but delightful story and superb soundtrack more than make up for the issues and, yes – pushes Nier to be above average."

If Nier was Yoko's wonderful ideas struggling to be properly expressed, the decision to bring PlatinumGames into the fray appears almost genius. Platinum are accomplished and can deliver, from original titles like Bayonetta through to licensed stuff like Teenage Mutant Ninja Turtles and hopefully will soon prove their ability to deliver on a big first-party bet with Scalebound. If any studio can take Yoko's ideas and make them sing, it's Platinum.

These are the building blocks of Nier Automata: Taro Yoko's vision provides the undercurrent of weird, eccentric and charming design that made Nier great. Platinum provides what they know best: searing action combat at a solid 60 frames per second. Keiichi Okabe provides the incredible music that really invigorates the series' tone, and Square Enix itself rounds out the operation by providing their typical RPG expertise. This layout was echoed a little by producer Yosuke Saito in our interview with him. 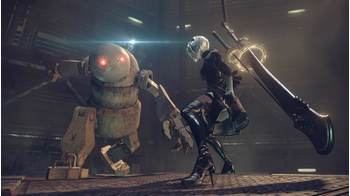 It's very difficult to not feel super cool playing this game.

Each of the finer selling points we took away from our deeply enjoyable early hands-on with the demo links up to one of these points. The video is above... so why don't we shirk the regular preview format and cover each of the four?

Okabe's music: the lifeblood of Nier

I honestly think the music of Nier is one of the most important aspects of the series; without its signature sound, this wouldn't be a proper sequel to the game. Okabe's music is a stand-out right the way through the demo.

Look. The music is still brilliant. Next!

Platinum is of course best-known for their brilliant action-based combat in games like Bayonetta, and Nier Automata appears to be no exception. It moves at a silky smooth 60 frames per second even on a regular PS4, though it does so by displaying at a resolution a little lower than 1080p. On PS4 Pro and on the eventual PC release it'll display at a full 1080p while maintaining those 60 frames, of course.

The basic feel of the combat is one driven by light and heavy attacks, with your two main equipped melee weapons dedicated to heavies or lights in particular. Each has a dedicated button, and when paired with the ability to have multiple different sets of weapons pre-set before you go into battle and the ability to switch between them with a single press on the D-Pad this can lead to fantastic, weapon-switching, enemy-juggling combos.

A tap of one of the triggers dodges, but holding initiates a dashing glide. Dodging and counter-attacking can launch enemies and do additional damage, while the icing on the cake comes in the form of the gun module and bullet hell style sections where dodging incoming fire is as important as attacking. 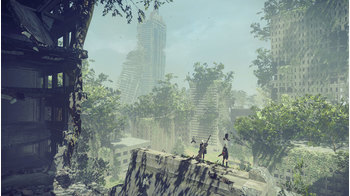 It's very difficult to not feel super cool playing this game.

It all feels great, and many of the ideas attempted in the original Nier return here with a greater degree of polish. The camera can get a little fiddly from the standard third person action perspective, but it also impressively switches from that to different viewpoints such as top-down and side-on depending on the requirements of the area you're in.

In many ways Nier Automata feels like multiple games in one: it switches from melee action to a modern bullet hell to a weird Starfox moment then back again in a matter of minutes.

It feels great. Platinum's pedigree clearly helps. For more casual RPG fans there's an easier, hand-holdy difficulty, and for hardcore action nuts there's a one-hit-means-death mode. I imagine most of us will play on the two difficulties in the middle, however.

Part of what made Nier so special, as we mentioned, was how weird and mad it was. The good news is that despite the fact that Automata is definitely quite a bit more approachable, it's no less mad. We have at least one way we can recount as a relatively spoiler-free example.

In the game you play as an Android. Character progression is linked to a 'chip' system where you insert various chips to give yourself new abilities. One of those chips is called the OS Chip. But... an android isn't really very functional without its operating system, like any computer.

But it's a piece of equipment like any other. If you remove it...? Well, you just die. That's it. It's a pointless tidbit, but the game doesn't care. It wants to let you do that mad stuff, so it does.

For something just as mad, go take a look at the boss encounter in the demo in the video above. I mean, just look at it.

While Nier Automata feels like a pretty well accomplished action game, under the hood it appears to be a fully-fledged RPG. If you poke around the level a bit you'll find backtracking, shortcuts and optional areas often cleverly hidden in places where static camera angles restrict your view. 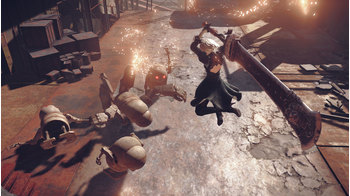 Aerial combos are the best.

Beyond that there's also a slew of weapon equipment, with any weapon able to be placed in either the light or heavy slots and multiple weapon sets you can cycle between mid-battle.

There's also the skills system, mentioned earlier, which allows the player to equip stuff to more deeply customize their character. Chips equipped here can be used to do anything such as power up your character, turn off the mini-map, or even, well, kill yourself. We touched on that earlier.

The RPG side of the game is still the one we're least absolutely certain on, but it seems at the very least the makings of a solid action RPG are here - but how deep the systems go remains to be seen in full. Depending on the number of weapons and skill chips available there could be a serious amount of RPG depth. We hope so, for obvious reason.

Questions remain about just how the game will work, of course. There's how long it'll be, how its action combat will hold up over a more proper RPG length, how its semi-open nature and seeming hub worlds will play into everything, or how many insane & cool set pieces like the demo boss will be included.

These questions all hang importantly, but what really matters for now is that the half-hour slice of Nier Automata put out by Square Enix for fans to put out is pretty damn amazing. It shows promise as a potential contender for the very best of next year. Go play it for yourself. March can't come soon enough.