Nintendo’s first-party lineup for the Switch has had an astoundingly strong launch year. The Legend of Zelda: Breath of the Wild led the charge. ARMS and Splatoon 2 both gave a solid one-two punch to follow through. Then just recently, Super Mario Odyssey kept the train rolling brilliantly.

I’d say this bundle of games, among others, have made the Switch an impressive platform already. The developers over at Monolith Soft aim to sweeten the deal even more. There’s something special about Xenoblade Chronicles 2. I’m just about 30 hours in and it has been simply incredible.

Note that this preview of Nintendo’s next big RPG is spoiler-free.

Newcomers to the Xenoblade series shouldn’t shy away; you don’t need to have played the previous entries to start playing this one. 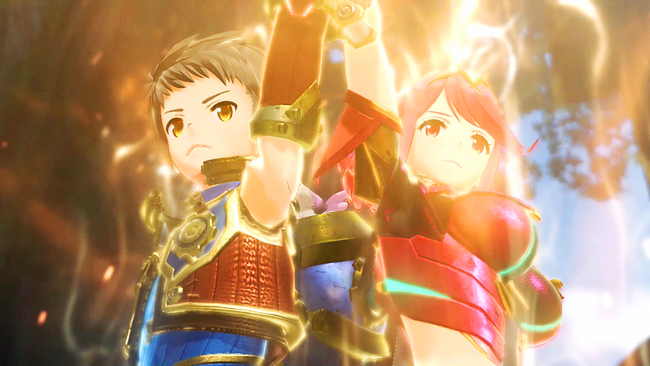 Its tale revolves around Rex, a young scavenger in the world of Alrest trying to make an honest living. Circumstances have led him to meet the beautifully enigmatic Pyra and takes up her wish to seek out the mythical land of Elysium.

The folks over at Monolith Soft have expanded the concept of Xenoblade to an absurd level. Entire landscapes and nations were mounted onto the bodies of two colossal Titans in the original. Xenoblade Chronicles 2 continues to explore this idea more intricately for sure, but it also has more Titans of varying shapes and sizes. Some are even utilized as transportation vehicles amid the sea of clouds in Alrest.

There’s a clever twist to all of this. Series veterans will recall that the time of day is a key element in this series; NPCs and foes alike come and go depending on whether it’s morning, noon, or night. Now tides have to be kept an eye on as well. A high tide may gate access to some areas, but open up new previously unreachable ones along the way. Titans are not floating in the sky after all; they’re swimming in a gigantic ocean that happens to be covered with clouds.

A few far-off sidequest items had me scratching my head. They only appeared in a certain time of day, but I could not for the life of me reach the little island they were on. I tried jumping to it again and again like a fool only to realize that I needed to wait for high tide to swim on over to it. Thankfully resting at an inn lets you manipulate the tide situation; the time of day can be changed to any hour at any time. 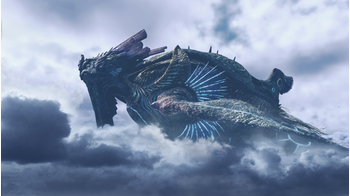 Speaking of inns, there’s actually a bit of Final Fantasy XV’s leveling system in here. Xenoblade Chronicles 2 still allows you to accumulate experience points normally fighting mobs - no mistake about that. EXP awarded from quests build up through a separate bonus pool though. Players have the option to level up from them when resting at an inn. It even gives you the option to choose how many levels you want to go up.
Advertisement. Keep scrolling for more

Nevertheless, aimlessly wandering into the unknown has delightful payoffs. Discovering new landmarks lets you fast travel to them. Several sidequests are far off the beaten path as well. It’s easy to stumble upon areas with ridiculously high-leveled foes, but there’s a certain thrill of discovering what’s beyond them.

The towns and villages I’ve stumbled upon are all lively, though their most intriguing aspect is how distinct their cultural identies are. Each of their townsfolk make a living in different ways to adapt to their location, which shapes their perspectives. Several sidequest plotlines begin to unearth it in a tastefully subdued manner. Political intrigue plays a key role in Rex’s journey and there’s a fascinating layer of world building beneath it all.

Plus, completing sidequests and engaging with locals gradually raises that localtion's development level. This’ll expand the inventories in shops, reduce prices, and may even open up new quests.

It’s a fully realized world and the sense of scale continues to be out of this world - in true Xenoblade fashion.

Traveling from town to field and back again is all seamless; there are no loading screens aside from fast traveling and a few cutscene transitions. Loading times are quite fast even in undocked mode. The longest time I’ve seen one is roughly ten seconds, but it rarely reached that. Textures and assets take another split second to pop-in especially if it’s in the middle of a crowded area with a bunch of NPCs. 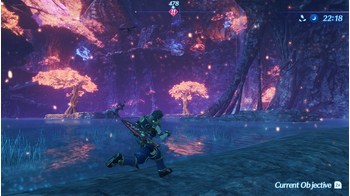 Still, it’s undeniably a remarkable achievement especially if you plan to play a lot of it on-the-go. Just make sure to pack a power bank for your Switch if you plan to spend a lot of time playing Xenoblade Chronicles 2 as a handheld game. I packed in a healthy dose of exploration, story cutscenes, fast traveling, and combat that sent a full charge down to a low battery warning within two and a half hours.

Battles in Xenoblade Chronicles 2 have found a good footing that blends the Switch’s Joy-Cons into its UI in a splendid manner. It’s complex, involved, and more importantly, very fun once you understand it.

Like its predecessors, encounters are carried out in real-time though much of it is menu driven. Parties normally consist of three Drivers that can carry up to three Blade weapons. Tora is a special exception, who can only wield his highly customizable Poppi Blade.

Combat maintains a certain upbeat tempo and flow. Auto-attacks charge up a Blade’s three basic skills which in turn, fill up their special elemental skill. Canceling these into one another as you switch between Blade weapons executes them even faster.

Basic skills can pop out HP potions, deal additional damage from an enemy’s rear, or send them soaring hilariously spinning in the air. A Blade’s skill set is defined by their Attacker, Healer, or Tank role. Attackers bring on the pain as they reduce aggro while a Tank keeps the opposition’s eyes on them.

Thus, a Driver’s Class is determined by the types of Blades they have equipped. A Driver with two Healers and a Tank Blade takes up the Holy Knight title. Each Class comes with different passive effects so in this case, a Holy Knight will take reduced damage, gain more HP from potions, and gathers less aggro upon using skills. There’s a huge amount of ways to customize how you want to setup your party. 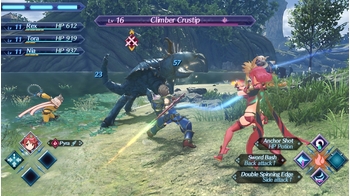 The real big payoff throughout battles in Xenoblade Chronicles 2 is the constant honeypot you’re stirring with elemental skills. Imagine chaining Final Fantasy’s Fire into Watera into Firaga spells for a devastating steam explosion finisher. It’s essentially that; your three party members work in unison for a big kaboom at the end! Doing so will enhance your ultimate Chain Attacks as you take turns whacking on foes.

There’s a satisfying depth to it all. It’s on the brink of overwhelming, but laid out intuitively. The HUD avoids the tiny text problem in Xenoblade Chronicles X. I could clearly read it all in handheld mode.

Blades are the lifeblood of battles, so you can expect to be getting a bunch of them. You can earn new ones by opening Common and Rare Core Crystals that can be found in chests or drop in battles. Yes, it is very much reminiscent of mobile games that have gatchapon systems. There are even special Rare Blades that can crop up in Common Core Crystals and in the same manner, Common Blades can manifest in Rare Core Crystals as well.

Aside from rare ones, common crystals have a randomized role, weapon, element, type, and gender. You may roll a female humanoid Blade that uses a hammer to tank with electric attacks. Perhaps a male brute Blade that utilizes gauntlets packed with healing and ice skills may pop out too. Common crystals are fairly frequent to come by, though Rare ones are a bit trickier to find normally.

All Core Crystals are earned in-game. There is no way to purchase them with real money. Blades are bound to the Drivers that open them though. Transferring a Rare Blade to a different Driver requires extremely rare Overdrive Protocol items, so think twice before using them. 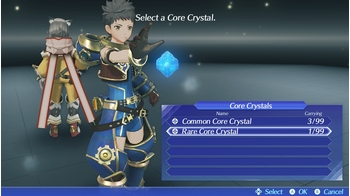 A peculiar thing that stuck out to me was that each Driver has different skillsets for each weapon type. Rex had a useful skill that launched foes with a Greataxe. When I transferred that Rare Blade over to another party member, she no longer had that skill and it was replaced with dealing bonus damage to toppled foes.

Regardless of what you decide to do, both Drivers and Blades all have unique affinity trees. Some of these power up skills the more time you use them. Others level up field skills to harvest special points on the map. Airflows may require a Level 2 Leaping and Level 3 Wind Mastery skill to access. A locked chest could ask for Level 1 Lockpicking and Level 3 Focus field skills. It’s worth investing in the little challenges to level up affinities for additional rewards.

I soon found myself drowning in Common Blades on my hunt for Rare Blades in crystals. It’s tempting to dispose of them to clean up Blade inventory space, but hold out till Rex gets the ability to manage mercenary groups. You can supplement your gold and EXP income by sending excess Blades out on side missions that take a set amount of time to complete. These also make for a great way to level up affinities too.

Xenoblade Chronicles 2 has been a massive joy to play so far. I’m aware many remain a bit skeptical due to its move to a more cel-shaded anime artstyle. I think it largely benefits from it so far. Characters are much more vibrant and animated in cutscenes. Rex’s party compliments each other. The chemistry between them works. It pulls off endearing light-hearted moments particularly well, and the English voicework is no slouch at all - even compared to the highly regarded performances in the first Xenoblade Chronicles. I've sunk a bunch of hours into it and I feel like I've only scratched the surface. What I've witnessed so far has been amazing and I'm truly excited to see what else Xenoblade Chronicles 2 has in store.