Just ahead of E3, Airship Syndicate announced a surprising new prequel-slash-spinoff for the Darksiders franchise in Darksiders Genesis. Less than a year removed from Gunfire Games's Darksiders 3, Genesis finds itself in a sort of unique circumstance by virtue of also being under the umbrella of THQ Nordic, who had absorbed the remnants of Vigil Games and now employs ex-Darksiders developers at both Gunfire and Airship.

Specifically, Darksiders Genesis now finds itself back at the feet of one Joe Madureira, the original Creative Director over Darksiders at Vigil Games. Not only did we get the chance to sit down in a sort of roundtable discussion with Joe and Airship Syndicate president Ryan Stefanelli and speak with them about returning to the franchise, but we also went hands-on with the new isometric prequel ahead of its release later this year.

Darksiders Genesis is a prequel to the existing trilogy of games. When asked for clarification, since Darksiders 2 and 3 are both also sort of parallel prequels in their own rights, Joe clarified that Genesis is before all of the existing titles, and takes place shortly after the four horsemen became the Kinslayers of the Nephilim. "It's actually a good jumping on point, and will introduce a lot of characters for the first time, but if you've played the others it's still cool because it adds a lot more depth to the world."

Darksiders Genesis is the first in the series to feature Strife as a playable character, who is the last horseman to be featured across the series. We took the chance to ask whether Fury or Death would make appearances in Genesis alongside Strife and War, and whether this title "counted" as "Strife's Game" in the same way the first three titles each focused on a different Horseman. Joe stomped out any possibility of a 4 player romp pretty immediately. "Fury and Death are...otherwise engaged in other missions, they are not playable in this game. They're in some cutscenes, but they aren't in the game."

As for whether or not Darksiders Genesis "counted" as Strife's game or not, things were a little more up in the air. "That wasn't the idea at all for us. It was cool to have both a brand new character and a returning one, but that's really a THQ question about whether they want to make Strife have his own solo adventure or not. It's cool that they've let us debut him this way, but I don't know if this would count as his own game."

Joe went on to talk about how Genesis is injecting a little bit more humor into the series, something that matched up with my time on the floor demo. Strife acts fairly irreverently in most situations he's put into, where War acts as the stoic straight man -- something that is pretty in line with his character. For instance, after defeating a Scrooge McDuck-esqe demon named Mammon in a pit of gold and trinkets, Strife declares that he wants to take back a gold toy rocking horse as a souvenir, only for War to knock it out of his hand at the last minute. It's interesting to see this sort of buddy-cop adventure vibe in a Darksiders title, but it seemed to fit the duo pretty well.

Not only do the two characters each have their unique personality characteristics, but also serve distinct roles in combat. Joe described Strife as a sort of high-skill twin stick shooter gameplay style, one that plays more towards a high-risk high-reward mentality. "He has a couple of melee attacks that will cripple enemies to keep them away, but focuses mostly on single target damage. War is more awesome in a crowd. War is super easy to pick up, especially for returning players." Surprisingly, even despite the change to an isometric viewpoint, War's animations and control style felt almost identical to what's present in the original game. Several of his abilities such as his Blade Geyser and even a lot of the animations seemed to be a one to one recreation of Darksiders. Ryan did mention that some of his animations were sped up a little to fit the new viewpoint a little better.

Ryan would go on about adapting Darksiders to the new perspective. "When Darksiders Genesis was first revealed, it drew a lot of comparisons to Diablo. Which is cool! We like Diablo. But we truly think of this as just an isometric Darksiders game." During my time with the game, this slight distinction seemed fairly apt -- Darksiders Genesis doesn't have the loot or procedural generation of Diablo, and is admittedly more like a Zelda game. But as a series that's always straddled a few genres and styles, the fact that it still felt like a Darksiders game from the way the puzzles were designed to how War felt to control makes it pretty apparent that Airship has been successful thus far adapting for the isometric viewpoint.

Progression in Darksiders Genesis seems to be similar to how the series has conducted itself thus far (only without the weapon system of Darksiders 2, which feels even more like a series' black sheep at this point.) Wrath Cores and weapon enhancements will increase War's capabilities as in Darksiders, and Strife will also be able to find up to 7 different ammo types for his trademark pistols. So not only does each character play somewhat different, but the way their arsenal expands over the course of the game increases in slightly different manners as well.

A new feature to the series is the addition of Creature Cores. Any creature has a chance to drop a core unique to that creature, with bosses dropping unique cores as well. Additionally, levels can be replayed on higher difficulties in order to gather more cores to power up their abilities. So Genesis is the first game in the series to feature bespoke levels where a difficulty can be selected for replays, not altogether different than what was found in Airship Syndicate's Battle Chasers: Nightwar.

Near the end of the discussion, I took the chance to ask Joe what it was like to watch the development and release of Gunfire Game's Darksiders 3 from the outside. "We're still friends with those guys, they kept us up to speed and even sent us the script during development. They were even asking for my input on updates to Strife's design because he makes an appearance there, and Fury's design was so old that I provided some updated ideas. So there was some involvement, it wasn't completely secret."

Continuing,  Joe and Ryan referenced the common development lineage of Gunfire and Airship: "It was always in good hands, I don't know who else could have done it justice if not them." Ryan chimed in saying both studios are in Austin, Texas, and only a couple miles from each other. While the studios aren't specifically working together on games, they're always talking and sharing ideas. "For instance, when they (Gunfire) did Darksiders 3 in Unreal and we had just finished Battle Chasers in Unity, they were able to give up some tips for using Unreal (for Darksiders Genesis)."

One final question that I asked Joe was if there was any update to the long-awaited 10th issue of his original Battle Chasers comic, he pointed me to a recent update on the Nightwar Kickstarter page, after jokingly telling me to "please leave". "It's coming, we're going to bring on some people to help and get it done." 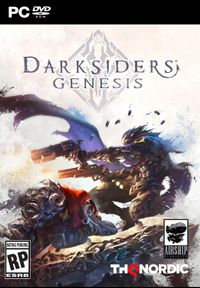