While E3 is always full of pomp and ceremony for the biggest and splashiest new games coming out, several smaller indie-scale titles also try to make an impression over the course of the week. During the show, I had a chance to stop by 505's demo room to play a little bit of Re: Legend, an indie farming RPG / simulation game from Magnus Games Studio based in Malaysia.

Re:Legend is a game with a silly title Kickstarted in 2017 as 'Re:Legend - Co-op Monster-Raising RPG'. It's set to release this Summer for Steam with PS4, XB1, and Switch releases planned for the future.

I had heard the name of this game here and there before checking out the E3 demo, but I wasn't quite familiar when I sat down to check out the demo. I was greeted with a game with a cutesy art style, where my character had just woken up and needed to tend to his farm. I was growing a variety of plants, which the demonstrator told me I could either sell the harvest for money, keep the items as food for pet monsters (known as Magnus), or even use for the game's crafting system. It didn't seem to be a very complex system - the UI would tell me when a plant was watered or needed watering, and the game would let me know when it was ready for harvest.

After playing around a little bit on the farm, I was then tasked to tame a monster, a baby water dragon. This involved throwing a piece of meat at it, then getting close and performing a quick mini-game where I had to keep my cursor within a small window as the thrashing monster tried its best to get away from me. Soon enough, I had a pet water dragon following me around everywhere. It was something I couldn't really experience in the demo, but befriending various Magnuses and feeding them their favorite foods would allow them to grow and evolve into newer and better Magnuses.

I also got to check out some fishing and some combat, both of which are pretty simple systems. Fishing simply involves using the right bait with some easy button timing. Combat is done in real-time where the player and their Magnus can take on foes using a simple attack-and-dodge style to battle. Different Magnus monsters also have different types of combat and can even be mounted for both battle and exploration.

This isn't something I could experience in the demo, but a big component of the game is said to be co-operative play, where almost all content can supposedly be played with friends.

There are a lot of little systems at play, and I couldn't check all of them out during my demo period. There's fishing, farming, crafting, dungeon exploring, monster raising, combat, chatting up villagers, and more. It's hard to see how well all these various components mesh in such a short time, but it seems like there will be plenty to do to keep you occupied.

There were a few things that didn't come across too well in the demo, though. I was playing the game with keyboard&mouse controls, which I did not find very intuitive. There were are few different "confirm" buttons depending on the situation, whether you were farming, fishing, in combat, etc. I also felt that sometimes the precision needed to properly perform certain actions was oddly restrictive, like planting or watering in the farm. Your character had to be positioned just the right way at just the right angle for the game to recognize what you wanted to do. I'm sure this is something you'd get used to after hours of playing, but it definitely didn't feel quite right during my short demo period.

Another small annoyance was that the default character movement speed seems incredibly slow to me. You can perform a dash at the use of some stamina, or use a Rune skill to move quickly for a limited period of time, but more often than not I found myself stumbling along at the speed of mud. This made everything seemed like it takes much longer than it should, and considering time-management is important, it doesn't seem quite ideal. This also made combat somewhat tricky as it was difficult to move out-of-the-way for enemy attacks.

The game's menu interfaces also seemed unintuitive and incomplete, which made using items a little bit awkward and seemed to take more steps than ideal. However, these those sorts of things are probably not yet finalized.

Re:Legend is trying to compete for that Rune Factory or Stardew Valley audience, but based on my time with demo, I might just wait a while for some tune-ups before diving in again. 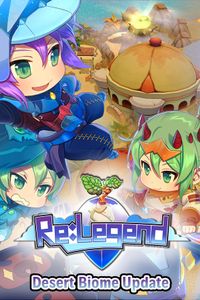