PlatinumGames has been a bit dormant for awhile. The last thing they’ve put out was 2017’s stellar NieR: Automata and since then, it’s been a spiral of announcements that has yet to bear fruit or outright canceled. There hasn’t been a word about Babylon’s Fall since its unveiling at last year’s E3; their mobile game projects (Lost Order and World of Demons) are MIA; Scalebound met an unfortunate demise; their involvement in Granblue Fantasy Relink came to an end as Cygames shifted its development in-house. Coming into 2019, the only thing we knew about PlatinumGames was that they were working on Bayonetta 3 thanks to its reveal at the Game Awards… two years ago.

Fortunately, February’s Nintendo Direct turned things around with the amazing Astral Chain reveal and better yet, it was coming out this year. Now it’s just around the corner and I got some time in with the final build of the game. 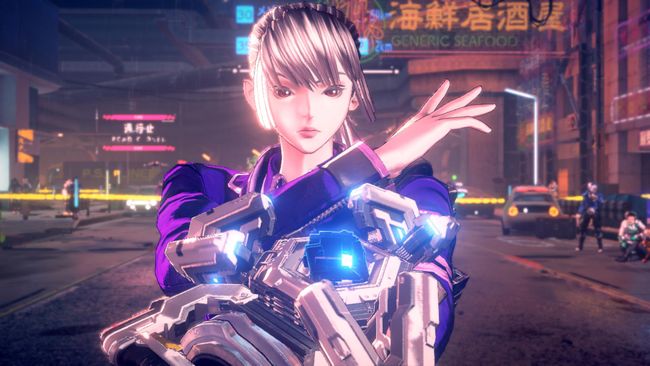 If you’ve played any of PlatinumGames’s finest before, you know what to expect. It has their staple over-the-top action choreography chock-full of ridiculous sequences. Within the first minutes of the game, you’ll find yourself hanging on for dear life at the edge of a collapsed highway dodging the burning vehicles that are sliding off. PlatinumGames is unchained once again.

Now I know you might be questioning why RPG Site is covering this. Astral Chain is unmistakably an action game above all else. It does have some light RPG systems with displaying damage numbers and skill trees for Legions, the adorable pets that help you combat pesky interdimensional invaders. There’s other minor progression mechanics in play but at this point it’ll all sound like excuses so here’s the real raw reason - I asked and lightly pushed the powers that be and they complied.

Kazuma has covered most of Astral Chain’s basics in an earlier hands-on with the game a few weeks ago at a press event here. I’ve been working my way through it and wanted to share a few neat things that I probably won’t have a chance to cover in my final review.

Unchain Yourself at (Almost) Anytime 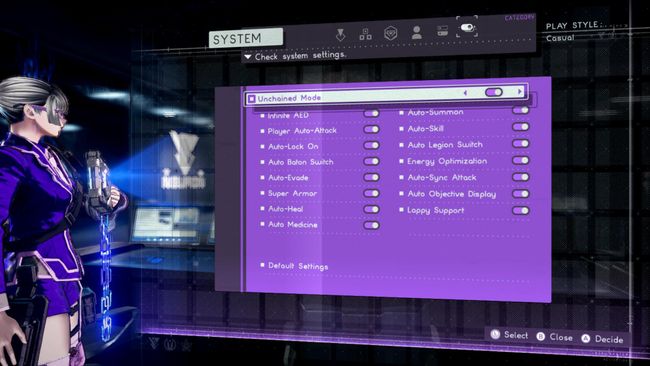 Like with other past titles from PlatinumGames, there’s a mode for players who aren’t interested in dealing with the intricacies of combat. There’s a lot to manage in Astral Chain so it’s easy to be overwhelmed when all aspects of the battle system are unlocked. For those who don’t want to or unable to deal with its battle system, the Unchained playstyle automates fighting for you. It’s fairly comprehensive like the auto-battle options that were eventually added to Xenoblade Chronicles 2. You can tweak various specific elements to be automated to your liking. Want to stay on the offensive without worrying about item management in the heat of battle? Have the Unchained Mode take care of it for you. It can also be an ideal gateway to learning Astral Chain’s combat more gradually as well. Keep in mind that Unchained Mode can only be used on the Casual difficulty, but you’re able to bump up the difficulty at the end of a chapter or back at NEURON HQ. 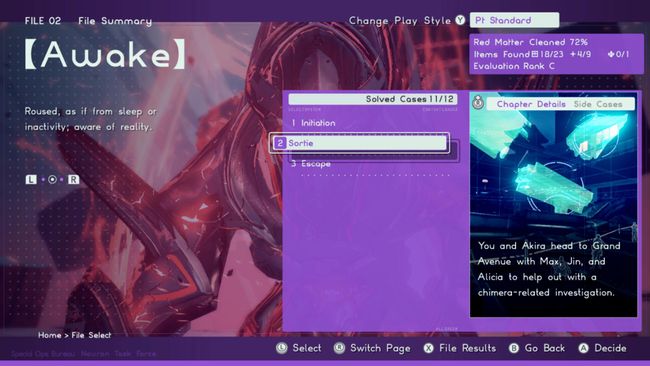 Traveling back to past stages is encouraged in Astral Chain. There’ll be parts you can’t interact with until you obtain a specific Legion later on in the story. A dumpster might be in the way to an optional battle arena that only the Arm Legion can move or several bags of trash can only be cleaned up with the Beast Legion. The nice thing about Astral Chain’s level select is that it’s divided up into a chapter’s major segments. You don’t have to start at the very beginning if you’re aiming to get a specific task done that occurs way later in the chapter. 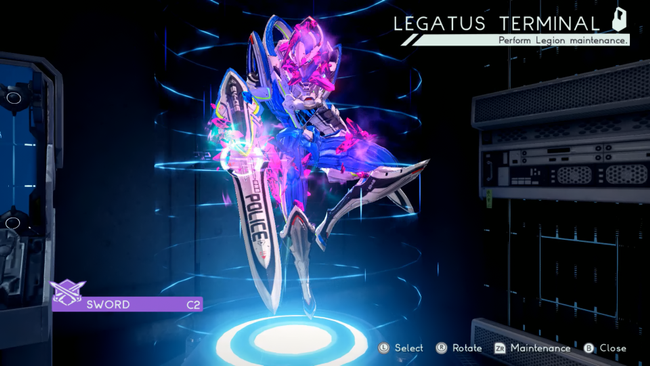 Personal hygiene is important and it’s up to you to not only look (and smell) your best, but your Legion as well! Legions put in a lot of work out on the field and of course they’re going to get dirty after beating up some baddies. Back at NEURON HQ, you’ll have to give your adorable Stands Legions a proper shower by maintaining them. Rinse and scrub away those icky looking corruption crystals and have them looking sparkly clean again. They’ll show their appreciation by roaring loudly at you.

Friendship Ended With Siri, Now Vendor-3 Is My Best Friend 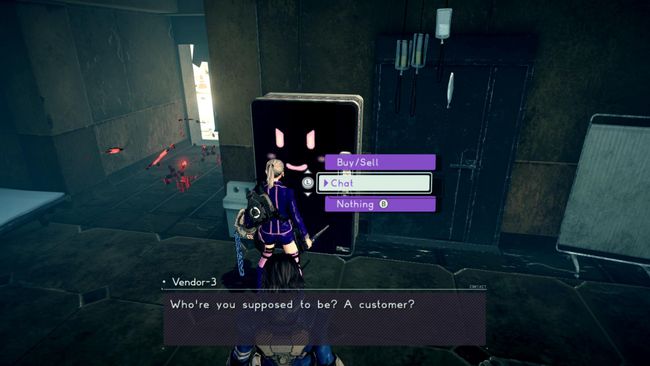 Astral Chain is filled with strangely charming touches in its bizarre borderline apocalyptic sci-fi premise. Chatty vending machines isn’t particularly a novel idea, but I appreciate the strange amount of care put into them in this game. You’ll meet your first one at NEURON HQ and as you encounter more, you’ll start noticing that every one of them has their own personality. I thought they’d be all the same at first and I’ve already encountered the rude Vendor-3 up above and one that’s constantly coughing… but I love them.

A Cozy Home Base 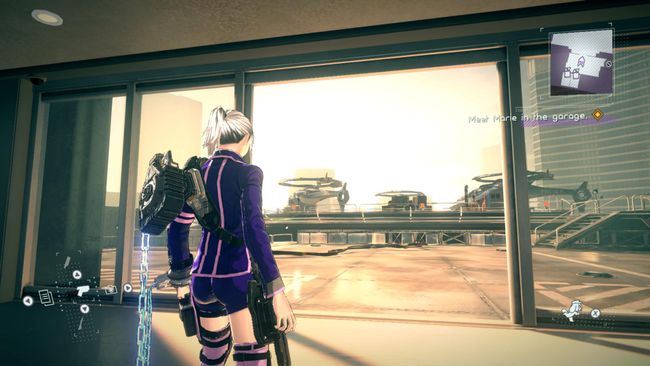 I’ve found NEURON HQ to be a nice place to wind down as major cases wrapped up in Astral Chain. There’s often new small side quests that give a bit more insight to the people that work there. Plus, the training terminal updates often with the new types of enemies you’ve encountered so you’re free to optimize your strategies against these new foes without being penalized. NEURON HQ is an effective breather following the big finales of chapters and launching from the helipad to the next mission gives me similar vibes to Deus Ex: Human Revolution when Jensen takes off from Sarif Industries’s helipad. 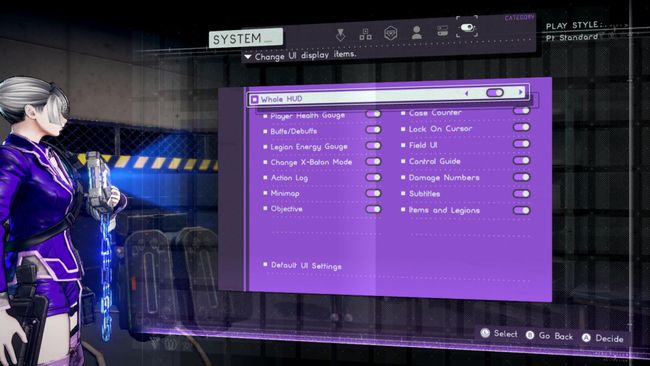 Not enough games these days really let you fiddle what you don’t want to see on the screen. Even fewer ones let you change up the color of the UI. Astral Chain gives players a pretty comprehensive breakdown of which UI components they want to see on their HUD. This makes it easier, for instance, to show off clean combo videos to your friends without a whole mess of numbers filling up your field of view. It’s also a great way to take your own screenshots though there’s also a separate in-game camera feature as well.

Fashion Chain Early In The Game 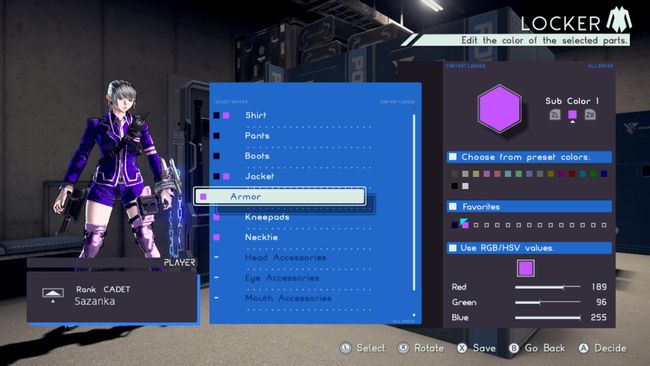 The thing I love about Astral Chain’s first few hours is that fashion options open up very early on. After the opening segment and a bit of exploring around in NEURON HQ for the first time, you’ll be able to set your own custom colors on your outfit. I’m always a bit bummed when a game has its fashion features locked for an extended amount of time, so I’m glad Astral Chain surfaced it almost right away. Eventually you’ll be able to customize the color set of your Legions a few chapters in and yes, the EVA-01 palette from Neon Genesis Evangelion for them is one of the first you can unlock.

There’s a lot to Astral Chain and I’m having a blast with it so far. Here’s a small gallery of a few more screenshots I wasn’t able to fit in here. Astral Chain is releasing on the Nintendo Switch on August 30th. 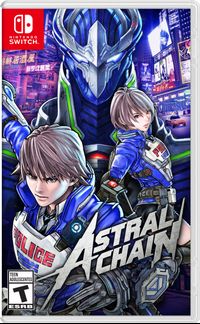