My experience with Disgaea can be summed up with one word- Prinny. I may never have heard of the RPG series at that point, but there was something very simple and charismatic about finding a game all about a bunch of penguins saying “Dood” and then exploding. I spent a lot of time wishing I had this strange penguin platformer and now, 12 years later, I’ve finally got that chance with Prinny 1•2: Exploded and Reloaded.

I chose to start this review off with an anecdote about my relative lack of experience with the series for two reasons. Firstly, it’s representative of the fact that the Prinnies on their own really can carry a game and bring in newcomers. Second and most importantly, I wanted to laugh at my younger self’s naivety. If I had played either of the Prinny games when I was younger, they would have absolutely destroyed me then because god knows they honestly still managed that now. Yes, these two games are some of the most difficult that I've ever played.

Prinny 1•2: Exploded and Reloaded is a compilation of two PSP side-scrolling titles, 2008’s Prinny: Can I Really Be The Hero? and its sequel Prinny 2: Dawn of Operation Panties, Dood!. Each game has you playing as a Prinny, one of the most disposable minions in the Disgaea series, as they are made the hero of the story in order to fulfill Master Etna’s crazy requests. As a compilation and remaster there’s not really anything much to say here. Both of the games are simple ports of the original with some upscaled visuals. Thanks to its simplistic art design, Prinny still holds up pretty well but if you’re expecting any significant new content or even any bonus behind the scenes stuff then that might be a disappointment.

Right off the bat one of the strongest elements of Prinny are its characters and sense of whimsy. The titular Prinnies are quite literally the star here, although the rest of the cast are a lot of fun too. Considering my introduction to the series was a bunch of clips of the penguins just shouting “Dood”, I didn’t expect there to be quite so much wit and self-referential dry humour. Both games are genuinely charming and full of funny moments, which make getting through them a whole lot easier. I also appreciated that this adventure isn’t exclusively for Disgaea fans as I’ve never played a game in the series but had no trouble getting behind the adventure here. There’s probably a lot more in it for fans but it’s completely accessible and great for newcomers too, to the point of actually raising interest in me to play other games in the series.

Saying that there’s a strong overarching plot in either of these games might be a bit of a stretch though. You’re given a basic objective at the start of each game and then slowly proceed through levels trying to complete that mission. The boss battles all provide a bit of a story too, but there’s nothing really deep here and that’s honestly fine. I liked the little interactions and bits of dialogue enough that it didn’t really matter that they weren’t pushing some massive narrative forward. It’s also very possible that my lack of experience with the franchise meant that I was simply missing key referential details in the plot, although I do doubt that it would change my perception significantly. The narrative does manage to be one of the main reasons to keep replaying the game as different cutscenes will play depending on the order you complete each level. Although these scenes are very charming, I’m not sure that they’re quite enough reason to put yourself through so much punishment. There are also collectibles that can be found in every level that unlock some special bosses and levels but I personally found it difficult enough to just get through the levels in the first place, let alone trying to get every doo-dad along the way for an even greater challenge.

Actually playing Prinny isn’t quite as easily recommendable as watching its cutscenes. That’s not to say that it’s bad by any stretch of the imagination, but it’s difficulty is going to be very divisive. The minute-to-minute gameplay is actually very simple across both games. You control a Prinny and you must platform across some short levels to reach the end boss. Along the way you butt-stomp, air-slash and spin your way through some inventive enemies and platforming challenges with a good number of levels between the two titles.

The big challenge comes from controlling a Prinny and how easy it is to die. For starters, Prinnies are very volatile and will go down after just a few hits. There are checkpoints along the way and a few health pickups but generally the best way to restart is simply to die and have a new Prinny take your place. That all feels like intentional game design and part of the game’s big twist that you have 1000 Prinnies to get through the adventure, but what can sometimes feel less purposefully done are the controls. If you make a split-second decision to jump in Prinny, you better be damn sure that you’re aiming exactly where you’re going because there's no mid-air correction here unless you want to waste that second jump. Until I got used to it, this was the source of hundreds of dead Prinnies and many angry swears at the TV. Sure, not every platformer has floaty physics, but this is easily the most committed jump arc I've ever seen in a game.

Even when I got used to that, it felt like enemies were always just hitting me before I got to the checkpoint. Sometimes it was a lot of fun to be so challenged, but there were other times when it felt a bit too oppressive and more rage-inducing than it was worth, especially if you choose to play these two back-to-back. The mechanics are at their best in the boss fights, which feel a bit fairer on the player and allow for a few more mistakes, although my preference here might just be due to the lack of instant-death pits and enemies knocking me off course to an early demise.

Out of the two games included here, I’d argue that the sequel is the better experience thanks to the few changes that it makes to the formula. In the second game you get the ability to power up some of your moves after filling up a combo meter, which actually can change the tide of battle in your favour. It’s not enough to make things easy by any stretch (especially since you can take one fewer hit than in the first game), but it does even the odds just a little bit.

Notice how I said “few changes” in that last paragraph. Besides the plot setup and a few additional moves, there’s really not a lot that separates these two games from one another. That’s not necessarily a bad thing but it makes it a little interesting to play these two back to back as they essentially feel like one game. There’s definitely a level of satisfaction that comes from learning how to control Prinny properly and get around obstacles with ease but it takes a lot of time and a lot of dead penguins to get there. If you never quite get that moment of everything clicking, then you’re going to get a lot less out of these two games, but if you manage to figure out the rhythm then you’ll find lots of content and challenge in this package.

For someone who isn’t a fan of the original Disgaea games, I was surprised at just how much I enjoyed my time with Prinny 1•2: Exploded and Reloaded. It’s not the best remaster I’ve seen and the challenge can be overly frustrating at times, but there’s still a lot of fun to be had in its simple-to-learn, hard-to-master mechanics and charming characters. 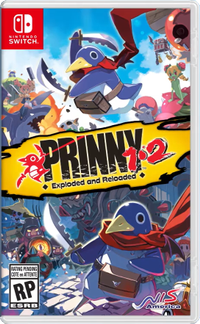