World’s End Club easily hints at death game drama with Danganronpa series writer Kazutaka Kodaka and Zero Escape director Kotaro Uchikoshi backing the project. However, it’s not that simple. First off, World’s End Club isn't really a death game. Second, it takes inspiration from the two’s previous works but only scratches the surface at resembling those franchises. Some sloppy twists and tedious platforming sequences prevent me from recommending what would otherwise be a heartwarming game.

After a meteor strikes their bus during a school field trip, the Go-Getters Club wakes up in an underwater theme park with wristbands locked around each person’s arm. Each wristband reads a classmate’s name along with a specific task that person must complete. Pielope, the game’s sadistic mascot, then forces the group to participate in a “Game of Fate.” Whoever completes their task first can escape the theme park. The others meet an unclear demise. You play as Reycho, the silent protagonist and group’s token leader, as he saves his panicking classmates from themselves. Thankfully, the death game serves as more of a prelude to the bulk of the plot.

World’s End Club focuses more on the adventure that comes afterward above the surface of the theme park as the Go-Getters trek toward Tokyo. Each chapter falls into one of three categories: Story, Act, and Camp. Story parts progress like typical visual novels, where the player reads through scenes as a bystander to the narrative rather than acting in it. Act works more like a side-scrolling platformer where players overcome obstacles and enemies. Camp feels like something out of a social RPG, inviting the player to speak to each of the available characters to learn more about them. Players traverse through branching paths as the game progresses, though only two options exist at most points.

Like the directors’ strengths might suggest, the story and characters stood out as the most enjoyable parts of the game. The character-driven pieces of the narrative were the most impactful, especially when touching upon themes of grief and loss. Expressive voice acting, mood-enhancing music, and vibrant art and animation also helped to immerse me in the story. However, some of the twists felt cheap, like they were thrown in rather than carefully hinted toward throughout the story. Some plot points, such as how the group was even formed, seemed like an afterthought rather than a solidified idea. Major questions such as what happened to Tokyo and why were left unaddressed or hastily answered.

Camp helps to fill in missing character arcs and development besides the exposition dumps in Story chapters. The cast carries the game and makes it easy to love despite the faults. Some characters might seem more one-dimensional than others (and unfortunately some stay that way) or have a hefty amount of backstory compared to the rest. However, most of it eventually sorts itself out after players have the chance to loop back and play through other paths available. In the end, most of the cast end up with a satisfying amount of backstory without overexplaining. Characters tend to build off of plain archetypes and develop beyond mere caricatures, though they could stand to do it more.

Act chapters challenge players to solve platforming puzzles, typically with each cast member’s special ability. These sections help characterize the cast but often feel more like distractions, especially with the disjointed control inputs. Jumps have a little bit of delay between when the console registers the button press to when the jumps actually happen. It took time to get used to but wasn’t overly inconvenient. I played on Normal because Easy was way too easy, though I wish there was a health bar instead of instadeath upon touching any hazard. Forgiving checkpoints made it not too much of a problem. That being said, I’d prefer if the Act parts were just incorporated as Story. I always dreaded these parts, enough that I took breaks between these points like “okay I’ll play until the next Act part.” In short, they were forgettable and a chore to get through.

World’s End Club embodies a lighthearted and family-friendly feeling despite the premise of an apocalyptic world. After all, the death game was only part of it, and it didn’t even impact me much because we lose characters quickly without finding out much about their personalities or motivations. It’s not like Danganronpa or Zero Escape -- more like a Disneyfied version of the two. Themes in the creators’ other works such as friendship and sex jokes still prevail in this game. It doesn’t hold itself to realistic standards but seems to reasonably consider how a preteen might feel in the situations presented. Some may complain about over-the-top tropes, but I feel they add to the characterization of the work and don’t detract from my enjoyment of the story.

Unfortunately, I wouldn’t be able to recommend this game as enthusiastically as Kodaka and Uchikoshi’s other works. While I found many of the characters likable, the story didn’t register any stakes for me. All the twists seemed to take away urgency from the story, so much that the triumphs felt predictable by the end. In that way, World’s End Club is like the watered-down version of the two works that inspired it. Of course, it’s not supposed to be the same. It still doesn’t quite stand on its own, though. It's successfully uplifting and heartfelt -- just not in the most cohesive way. I’d give a light recommendation to those who enjoy coming-of-age anime stories without the need to overthink them. 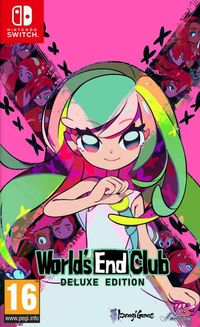