Dragon Quest isn’t a series well known for its amazing plots. Indeed, the general consensus amongst the gaming population is that the Final Fantasy series handles the massive, moving, epic storylines while the Dragon Quest series has always concentrated on putting out games more deeply rooted in gameplay.

In the case of Dragon Quest V, this simply isn’t true. Available now on DS under the subtitle ‘Hand of the Heavenly Bride,’ this is the second of a trilogy of Dragon Quest titles to get full remake treatment for the Nintendo DS to allow modern audiences to experience these arguably landmark RPG titles.

Understanding why Dragon Quest breaks the trend of easy-going plots of the first four games is simple – take a look at when the original was crafted. Released in Japan in 1992, the game was following hot on the heels of Final Fantasy IV and rushing to beat Final Fantasy V to market.

DQV follows one man – the hero – literally from his birth all the way through his battles against evil. Here is DQV’s triumph, as it chooses to focus on one man rather than a small party of heroes – and in spite of his name, the hero is a pretty regular guy. Through the game he’ll learn much of his own past, confront the secrets of his parents, and start a family of his own.

Being so intricately attached to the hero’s adventures throughout the game you’ll struggle to not become attached to the man as he continues his quest, fighting through obstacles and tragic events to complete his quest.

Graphically, the game is much similar to Dragon Quest IV, with lovingly drawn 2D sprites set against all new completely 3D backdrops, with almost every area from forest to castle dungeon bristling with beautiful colour, making great use of the graphical abilities of the DS.

Musically the game is also exactly what you’ve come to expect, too, a mini midi orchestra blasting from your DS speakers or headphones, great sounding and strangely addictive in the way only retro game music can be.

It is true that sadly the gameplay is the same kind of thing that has been a staple of the series since its debut over 20 years ago, but there are new additions, several of them striking. The largest addition is the ability to have monsters join your party, allowing you to make use of each monster’s unique skills in battle levelling them up too, making them more powerful.

In a way, it’s comparable to Pokemon, debuted several years before Pokemon ever existed. Monsters can be swapped out of your party for the biggest and meanest new monsters at ease, mimicking job systems in other games.

The main storyline characters are your bread and butter, and generally speaking can see you through any conflict, but the true diversity and fun of the battle system comes from recruiting and training monsters in your party to help customise your party and gear it towards more specific styles of fighting or make it as versatile as possible.

Dragon Quest V is a game that requires little explanation or exposition. It’s Dragon Quest. You know how it looks, sounds and plays, and DQV is one of the finest specimens in the series. It’s a major stepping stone and evolution in RPG development and had a major effect on the designs of many of today’s finest RPGs.

This remake is, like DQIV, superb. It’s been created with love, care and attention, and doesn’t show even the slightest hint of laziness or neglect. Indeed, it’s quite the opposite. While the gameplay is still slightly archaic, still a SNES RPG evolved directly from a 20 year old NES title underneath, in this game it’s the striking design that matters.

The striking presentation, great music, art and interesting gameplay are only the icing on the cake. The star of the show here is the plot. It’s the kind of story rarely seen in RPGs – less world-shattering, more intimate and more moving for it. 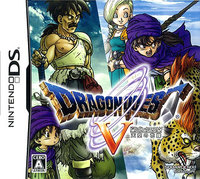