To be honest with you, I'm not exactly a huge fan of the concept of a 'Director's Cut'. I always think of two of my favourite movie directors - Tarantino & Scorsese - neither of whom ever release extended or 'director's cut' versions of their movies. My Google skills failed me today, but I once read a quote from Tarantino where he candidly says he makes the movies he wants to make the first time around. Why would he want to make the movie again?

I'd already played, enjoyed and reviewed Deus Ex: Human Revolution several years ago upon its original release. To follow Tarantino's line of thinking, what could possibly be added to make me want to return? The team at Eidos Montreal have partnered with Straight Right, the developer of Mass Effect 3's competent if poorly-timed Wii U port, to try to give me reasons to. In the end, they turn up plenty.

The world of Deus Ex is as appealing as ever.
In many ways I'd liken this version of Human Revolution to be more like a DVD of a movie. My favourite new feature comes in the form of a developer commentary - a feature I always love on DVDs of movies, for instance.

If turned on, occasionally protagonist Adam Jensen's communications unit will crackle. Hitting a button brings the real-world developers of the game into the comms, framed exactly as characters are in-game complete with little portraits of who is speaking at the time.

Developers share anecdotes about the game's development, release, and in some cases even chats about the public's reaction to certain scenes, areas and characters of the game they've crafted.

It's a lovely feature, well-implemented, the commentary rich, interesting and very often rather funny. There's a lot of it, too. Top marks there.

The commentary is accompanied by a documentary, around an hour in length, covering the game's conception and sometimes difficult development. If you find the behind-the-scenes of video games interesting, it's great stuff.

Another DVD-like change is a simple adjustment to the game's lighting and colour palette. The gold hue of the original release has been toned back a bit, and coupled with some other slight fixes and improvements to texture work, ends up making the game look quite a bit better, even on the ageing Xbox 360 version.

In the console versions, there's less of a hitch when opening the menu. Loading times feel snappier, and the Xbox 360 version, having more content, now comes on two discs instead of one - but even then, the disc change moments are smartly and conveniently spread.

More like a proper director's cut are the changes to the gameplay. One is simple and obvious: several pieces of DLC, including The Missing Link, the major story expansion, are now folded into the main game. Previously launched from the menu, this additional chapter - which takes place around two thirds through the story - is now actually part of regular progression.

Advertisement. Keep scrolling for more
The structure of the story requires the key boss enemies die, but now players of a more pacifist nature can find ways to take them down that don't involve shooting or blasting them.
The Missing Link doesn't damage the flow of the story - in fact, it enhances it. The standalone nature of the DLC meant that the developers 'pull a Samus' on Jensen and strip him of his powers for the player to earn and spec anew. In the flow of the full game, this is actually rather genius - two thirds in you lose all your powers, gradually regain ability points throughout The Missing Link and then can respec, ready to head into the home stretch of the narrative with a changed load-out if you wish.

The game's notorious boss battles have been fixed, too. Fans complained that forced fights where you have to kill the enemy went against the mantra of Deus Ex, and so they've been rethought. The structure of the story requires the key boss enemies die, but now players of a more pacifist nature can find ways to take them down that don't involve shooting or blasting them.

Boss areas have been expanded and rebuilt. There's ways to stealth and hack your way to victory, such as by turning turrets in the boss area on the boss. Adam himself never has to raise a finger, or carry a pistol, unless you wish him to.

The battles are still perhaps a little bloody than some people would like their Deus Ex stories to be, but the increased choice and the attempt to reconcile with that mindset is admirable. The boss battles aren't perfect, and really still aren't on par with the rest of the game - but they're a whole lot better.

On the Wii U, the GamePad provides a new way to experience the game, with menus, maps and other features dropped onto the second screen. This is a natural fit and works a treat. I opted to turn the TV-screen mini-map on so I wasn't having to glance down at vital moments, but in quieter moments, such as while hiding in cover as guards amble around, skulking in an air vent or in the city hubs, it's far easier to manage your inventory, see the wider map, read emails and so on with the bottom screen.

Best of all is hacking. In Human Revolution, the game world continues moving while you're engaging a computer terminal. Guards still move, and if you're playing riskily, a guard may round a corner on you while you're mid-hack. Then you're in trouble.

Hacking is a much more exciting experience with the GamePad.
With the GamePad hacking is a dream - the TV screen retains Jensen's point of view, allowing you to look around the area, keeping an eye out for guards.

You can adjust his point of view with the stick, too - and all your actual hacking, meanwhile, is done on the touch screen, as if it were the computer terminal. The sense of feeling like a real spy as you nervously glance between the terminal and the room in the midst of a hasty hack - as you would in real life - is palpable.

In performance terms, the versions we tested - Wii U, Xbox 360 and PC - were all relatively solid, with slightly different issues on each. The Wii U version suffers some very minor slowdown when things get really busy, especially if smoke or gas grenades are going off everywhere. The Xbox 360 version ships on two discs and chugs more with its loading. The PC seems to be the buggiest of the bunch, even months out from launch. Even so, all three versions are superior to prior versions of the original game, hands down.

The core game, then, is still as brilliant as it was. The story, too, has aged well in the short few years since its release. Human Revolution has a trans-human versus humanist tone that's dark in a refreshing way - not quite depressing, but certainly not an image of a beautiful future either. It's a vision of a deeply troubled future, and one that's fascinating to examine once again with foreknowledge of what is to come in the story.

Deus Ex: Human Revolution Director's Cut surprised me. I had essentially written it off as a lazy cash-in. It isn't. There's love, care and attention in this new package - a love letter to people like me, who loved the original release. The underlying game is as good as it ever was. If you've never played it, it comes heartily recommended. If you have - this might be worth a replay if you've the time - the changes are refreshing to say the least. 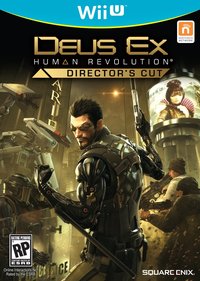 Some of the GamePad's features are also available on the Vita via remote play and on Xbox Smartglass, though one that isn't is movement-based aiming, used for weapons like the Sniper Rifle. This is serviceable and in some ways actually more useful, but I mostly stuck to using the sticks.