Mugen Souls failed to execute on some of its biggest concepts thanks to being weighed down by its overwhelming number of systems that were presented in a poor way, which bothered a lot of people. To me, it made up for many of its shortcomings thanks to its enjoyable cast, good writing, and charming atmosphere. Mugen Souls Z addresses a lot of the problems of the first game, not only fixing what was broken, but even vastly improving upon them in a rather remarkable way.

Before we get started, if this is your first time taking a look at the series, you may want to read my review for the original Mugen Souls before walking into this article as I explained many of the game’s core mechanics that are equally represented here.

The story picks up shortly after the events of the first game. The so-called Undisputed Goddess of the Universe, Chou-Chou, is riding the high off of conquering the seven worlds in the first game and turning everything on it, including the land itself, into her peons. She now looks to extend her dominion to the Twelve Worlds in her hopes to take over everything in existence. 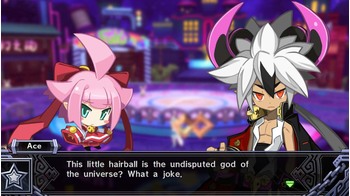 That's creampuff, thank you very much.
After leaving her friends scattered around the other worlds in a race to see who can take over their respective domains first, Chou-Chou happens upon an ultimate god who has just been awoken from her slumber inside of a nasty-looking coffin by the help of a newly-proclaimed hero, Nao.

Chou-Chou is suddenly pulled inside of the coffin only to have her powers drained away by the slimy pink goo inside. She is soon thrown right back out only to discover that she is now a chibi-sized version of her former self.

Taking a comfortable spot on top of Syrma’s head, she continues on with her former goal of peon-izing all of the different worlds, gathering up friends both old and new along the way, as the true story behind the existence of both Syrma and the worlds start to come to light.

The story can be a little difficult to follow at times especially when there are so many different plot threads to deal with, but the characters shine through better than they did in the first game and help keep things entertaining during many moments of the game especially towards the end.

Mechanically and visually, Mugen Souls Z looks almost identical to its predecessor but with a much improved presentation. Instead of having to put up with going through all of the game’s tutorials right at the beginning of the game, they are instead spread out over the first few hours, allowing players to ease into the experience once again without being knocked upside the head by it.

The gameplay is also the same as the original - players will travel from one world to the next finding spots on the map that will ask them to perform actions such as handing over a certain item, using a certain fetish/affinity to flip their switch, or fighing an X number of monsters. There's nothing really different, but then again, that wasn't really an issue before either. 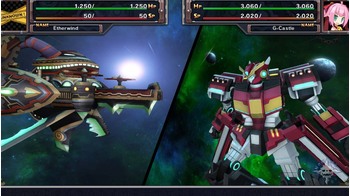 Voltron is pretty hip with the kids these days.
The G-Castle is slightly different this time around. While the basic functions are still the same, some balancing has been done by the developers to avoid it becoming yet another cake walk. You won’t be able to simply use Pierce over and over to defeat any enemy.

Even then, I was able to manage any baddie I came across by relying heavily on Reflect that would, as it states, bounce back any awesome attack they would fire my way. It certainly wasn’t as aggravating as it used to be.

Using a mix of the Mugen Field and the Enhance feature of the item shop that allows one to spend cash to dramatically increase the power of your equipment, I was able to cruise my way to the end of the game with only a few hiccups getting in the way of the experience.

Another huge complaint a lot of people had with the first game was just how dreadful loading times could be. Everything from performing actions in the battle to even opening the menu seemed to take longer than it should have.

The developers have clearly spent a good deal of time optimizing the engine as loading times have been basically abolished in the sequel. All it takes is a second or two to go from town into a field map, all without any cost to the performance of the game itself. Of course, I was playing the digital version of the game, so I don’t know how well that translates to the physical release. Doing a data install of the disc beforehand is an obvious recommendation in this case.

It felt great being able to quickly head back into town to restock on items and then jump right back into the thick of things; very few JRPGs have been able to do that in the modern era. Sure, the framerate can be a little dodgy at times, but it performs better than the original, and there are far more positives to be found here from a technical standpoint. 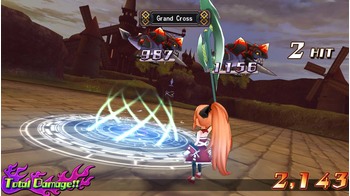 The numbers game once again plays a big part here.
While Mugen Souls had the Moe Kill system that allowed players to turn their enemies into Peons on the field of battle, it left a lot of people confused and frustrated - including myself. Thankfully, the new Captivate system streamlines the process.

Instead of having to cross your fingers and hope that the certain phrases used would create the desired effect, here, you get to see the effect before it even happens. I have also been able to recognize that components like Captive and Blast-Off are there for those that want to take full advantage of what the battle system has to offer, but one can easily navigate their way through most of the game without touching this stuff at all save for some very specific situations. It's made the experience much more tolerable.

There is a still a tremendous amount of depth to be found here, with a hundred floors to conquer in the Mugen Field; a wide assortment of jobs to unlock to make new characters for your party; multiple endings; and plenty of features to unlock that adds up to hundreds of hours of game time.

The game itself is a nice improvement over the original and maintains its lively soundtrack and solid voice work both for the Japanese and English tracks. The game still looks a bit too blurry during gameplay and the map variety is still lacking, but if you liked the first game, you’ll really enjoy the sequel. If you didn't, there's enough improvements here to warrant a second look.

Take a look at the improved mechanics in Mugen Souls Z