In my original review for Hyperdimension Neptunia Re;Birth 1, I talked about how the remake had made some crucial changes to the game in both its presentation and its technical performance. While a lot of the core changes remain the same here, there are still some important updates made to make the game that much more improved upon.

First and foremost, while the framerate during gameplay has seemingly not changed much with the transition, everything else like menu navigation does run at a full 60 frames per second, making the speed at which one can maneuver through windows very noticeable.

Even saving the game takes only a split second, which is nice when you're just looking to play the title for a short session. It's a bit of a bummer that the developers didn't change anything when it came to textures or map details, but at least things feel well-optimized, especially given how the developers have apparently used the widespread OpenGL API that allows for higher compatibility with different computer rigs.

Of course, for those looking for even more granularity than what the game provides (which at this moment is a scant selection of resolution options and the ability to go full screen or stayed in windowed mode), famed PC port savior Durante has released the Hyperresolution Neptunia fix that allows players to run the game at 8K if they have the equipment to support it.

Other things like control remapping and keyboard or controller support is also included, and that pretty much rounds out the options.

If you are looking for the best version of the first Hyperdimension Neptunia, but this time in a much more obtainable format, you should definitely considering picking it up, even though I do wish more work had gone into the port including the QA.

Speaking of which, as of the time of this article, a lot of the game-breaking bugs and other critical issues that people were reporting have been patched, so my time spent with the game just moments ago were issue-free, though I can't say I experienced the same issues some players reported.

Obviously with so many different combinations of systems, people are still reporting problems, but it appears that Idea Factory has at the very least been diligent on fixing them. The company clearly sees potential in the PC market, so it's reassuring to see this constant back-and-forth between them and the community.

Just a side note, it is great to see so many Japanese RPGs pop on Steam and other digital marketplaces on the PC. Not only does it allow more people to play the game that otherwise wouldn't have, but it makes the chances for localization of other important titles coming to the West due to the small overhead that comes with releasing a game on the PC platform.

It also serves as a means of preservation without the trouble with having to buy an expensive console and procure a copy of a game that may only be available physically. Hyperdimension Neptunia Re;Birth 1 is another in a line of wonderful surprises for this market that receives some really neat performance improvements from its transition to handheld to the PC. 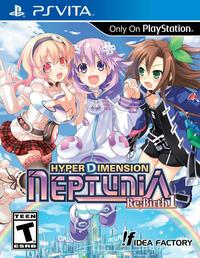