From its inception, the Hyperdimension Neptunia Re;Birth series was created to take some of the best features of the previous entries and remake, or rather, re-imagine them.

This meant streamlining the experience and tossing out mechanics that frustrated players - the difference between the first Hyperdimension Neptunia game on PS3 and Hyperdimension Neptunia Re;Birth 1 on PS Vita and PC embodies this transition. Plus, the developers also introduced new features, like the EXE Drive and Remake system, to keep things fresh and interesting along the way.

The entertaining writing makes its return in V Generation.
The game starts a little different this time around compared to Victory though the base foundation largely remains the same. After being chastised by her oracle, Histoire, for her poor performance, Neptune is driven out of her home pushed to become productive again.

During a chance encounter with an extremely timid woman, Neptune finds herself flung back to the start of Gameindustri's existence. The battle between the four nations of Lowee, Leanbox, Lastation, and Planeptune have only just begun and a new threat has emerged.

A newly added twist is placed in the prologue that players won’t fully understand until much later in the game.

Other than that, the story plays out similarly to how it was presented in Victory. There are some slight alterations amounting to more fourth-wall-shattering references towards the remakes.

The Remake system once again makes a return which lets players change several game elements to how they see fit. This means adjustments to the difficulty, adding new dungeons. and expanding the inventory of shops.

Stella's Dungeon makes a welcome return and made vastly more integral to the game.
A significant improvement has been implemented with Plans (blueprints to construct new stuff) - the game actually tells you where to find materials and whether it's from an enemy or a gathering spot. It's one of my favorite new additions to the game.

The confusing Scout system from Victory has been removed from V Generation. In its place is a far more enhanced version of Stella’s Dungeon. This mini-game has been fabricated to be more of a “roguelike” than in Neptunia Re;Birth 2: Sisters Generation.

In this mode, Stella can equip a weapon, some armor, and a special stone containing stat bonuses, such as more health and increased experience gain.

She also has several different Scouts the players can choose from to accompany her ascent up a giant tower; Stella recruits more and more helpers along the way.

You get to choose what area and which floor you would like for Stella to reach before escaping the tower with any equipment she has found. Scavenged equipment range from materials, items, new Plans, and more.

If Stella fails on her journey up the tower, she loses everything she is carrying and leaves the Scout stranded on that floor. It’s never dire though, since she usually obtains duplicates of items often and Scouts can learn a lot of the same passive abilities as the rest of their brethren.

I found Stella’s Dungeon to be a fun excursion in the previous game. It’s made far more useful this time around, especially since it replaced a system I had plenty of grievances over from Victory.

Plus, you can put the Vita to rest and she continues her climb, so it’s always a good idea to send her off before quitting.

The combat remains largely the same. When your turn is up, you can control a party member around a set region to get them into position to attack an enemy in range.

Power, Break, and Rush-type moves are available to wear the enemy down. Power moves prioritize wearing an enemy's HP down, Break moves destroy their guard, and Rush increases SP regeneration by using a multi-hitting attack chains.

Oh, what’s that, you ask? Didn’t you used to use Rush attacks to increase the EXE Drive? Well, the developers found players abused that system in the earlier Re;Birth games - which is true - and did away with the entire gauge.

Now it’s a part of your SP bar and there’s no way to refill it without spamming the aforementioned Rush combo or using recovery items.

While I appreciate the developers trying to stop player abuse of these special abilities, as it made the games far too easy at times, V Generation swings in the opposite direction by making sure SP can be fairly hard to come by while in the midst of battle.

Sure, it adds an extra layer of strategy to combat, but more often than not I cursed under my breath having to manage something so tedious. This is especially true when SP is also tied into skills and a CPU’s HDD form.

Combat is made deeper with the addition of a fifth combo move.
Perhaps it’s because I like to save big ticket items until later in the game, but SP recovery items are real expensive in the game. That makes it quite difficult to appreciate this change.

Aside from that, the combat has also been given a bit of a makeover. Party members can now add a fifth move to their combos, but here is where another fault lies with the game.

Plans are more closely tied into Challenges this time. Anyone who has played Victory remember the different in-game "achievements" you earned by performing tasks such as not taking damage for X number of battles or running for X number of meters.

Now you have to do it for every character to unlock specific plans for them, like unlocking that fifth combo move or increasing their parameters. This can be frustrating as it makes the Remake system out to be more of a gate for character progress and requires dozens of hours of time investment.

Otherwise, many of the same problems from the previous entries remain. Monster designs are recycled with a few additions. Combat can get somewhat repetitive and maps are reused constantly in which some of them reverse the direction that you approach it.

Another issue is the real lack of voiced dialogue heard throughout the game. Idea Factory has been real good up until this point of having a more vocal script, but it seems as barren here as it did in Victory.

There are a ton of challenges to unlock, but this can be a detriment to the experience.
It’s not a big deal as this is common within niche JRPGs, but I would have liked to hear more of it.

Not that I still didn’t enjoy my time with V Generation. The characters are as appealing as they ever were, and the shenanigans that come up when CPUs of one dimension meet their own alternate self in the other is highly entertaining.

I also wasn’t that bothered by the changes that were made though the EXE Drive change left me agitated. The referential humor is still on point as well with even more jokes added this time.

The Neptunia Re;Birth series has done a lot to improve upon what were originally mediocre experiences. After having covered all the entries for RPG Site I have found a lot of appreciation for the series I didn’t have before.

Now that it’s out of the way, I hope Compile Heart and Idea Factory explore more original directions for their satirical cast of wonderful characters. I wouldn’t mind another tactical RPG myself. 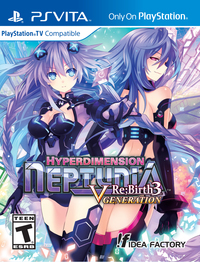