More than two years ago I wrote a review for Mario & Luigi: Dream Team as one of my first reviews for RPG Site. I'm fond of the series - it's colorful, quirky, ubpeat, and never takes itself too seriously. You won't find epic storylines or character dramatics, but Mario & Luigi typically manages to entertain with its rhythmic battle system and humorous dialogue.

Dream Team, while not a bad game, was a bit disappointing for a few key reasons. It felt overstuffed in all facets, from excessive dialogue to numerous tutorials and padded dungeons. Awkward gyro controls also led to a title that was more frustrating to play than it should have been. For the most part, it seems like the team at AlphaDream heard the criticisms and developed Mario & Luigi: Paper Jam with those in mind.

In order to restore order, Mario & Luigi have to team up with their two-dimensional brother in order to stop Bowser from scheming with .... himself.

From the get-go, it seems clear that the criticisms of Dream Team were taken to heart. While some of the typical tutorials are still present, they aren't as intrusive or as long winded.

Additionally, one of the first things one may notice is a Fast-Forward icon that can be activated at any time outside of battle by holding the Right hand shoulder button. Any scene, dialogue, or even the level-up screen can be sped through with a button press. It's a very welcome addition.

Paper Jam sticks close to the Mario universe when it comes to its story. While other Mario RPGs titles usually bring in new faces to the series to add variety to the cast, this title sticks with classic series' characters. While this is perhaps a little disappointing, it does allows characters like Toadette to show a little more personality, and it's fun to finally see the Koopa Kids up to no good in one of these games. The writing and localization manages to be as fun and comedic as the series is known for.

The inclusion of Paper Mario adds a little bit of combat variety.
The combat and exploration elements of the series haven't changed much. Enemies are still encountered on the field and battles center around well-timed button presses for attacks, dodges, and counters. Bosses can sometimes use abilities that require more intricate rhythm with both the circle pad and buttons. Luckily, though, these aren't as frequent or as drawn out as they were in Dream Team.

In order to be effective in combat, players have to learn enemy patterns and attack timing to dish out as much damage as possible while keeping the Mario Bros. protected. It's a simple but effective system that has worked since the first title.

New to Paper Jam is in inclusion of Paper Mario on the battlefield, and he works a little differently than his brothers. Rather than just having HP, he also has a sort of 'card count' that affects how many copies he exhibits on the field. This affects his attack timing, damage output, and resilience.

Used properly, he can easily be the most powerful of the three. Of course, he also adds a third button to button combos, which makes things a tad trickier at at times.

Also new is the inclusion of  'Battle Cards', which work similarly to 'Badges' in prior games. As the Mario Bros. progress around the world map, they collect a deck of cards with various effects, like strengthening various stats or increasing EXP gained after battle. The player selects which cards they want to keep in the deck to use in battle.

While not too different in functionality from Badges, it's a flexible system that adds just a bit more strategy in combat preparations when it comes to taking on some of the tougher bosses.

The 'Giant Luigi' battles in Dream Team were a spectacle, but brought down by clumsy touchscreen and gyro controls. In their place this time are 'Papercraft' battles, which use no auxiliary controls at all. In fact, all actions in Paper Jam use only the buttons or circle pad. No touchscreen, no gyro. It certainly remedies the issue of clumsy controls considerably.

Papercraft battles may not be as interesting as 'Giant Luigi' battles, but they are also much less frustrating.
Papercraft battles are relatively simple in structure; you move a giant cardboard character around a 3D arena, using dash and jump buttons to damage enemy papercrafts.  It's not incredibly interactive, but works well enough as a sort of alternate battle mode.

Where Dream Team used sidescrolling platformer sections in its dungeons, Paper Jam instead decides to go with a variety of minigames at various places. These can involve races, quizzes, jumping puzzles, and hide-seek type games.

These distractions are used to break up the exploration a bit, and usually only take a moment to clear. You can do extra minigames or harder versions for more rewards, but otherwise they work well enough to just mix things up a bit. Without the long sidescrolling puzzles this time around, the total game length is a notably shorter than Dream Team - I finished in about 30 hours.

I think it's obvious to anyone who played Dream Team that AlphaDream worked to iron out the kinks and create a more enjoyable game. While a few new elements are introduced here, Paper Jam doesn't stray too far from a formula that works. It's not the most creative the Mario & Luigi RPG series has been, but Paper Jam is a solid entry in the series that fans will surely enjoy. 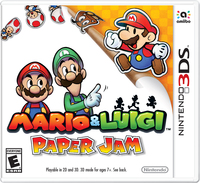