Atelier Escha & Logy Plus: Alchemists of the Dusk Sky Review

Before getting into this article, I would highly recommend my very thorough review of Atelier Escha & Logy for the PlayStation 3 I did for the site. This review will focus on the differences between the console and handheld release.

Atelier Escha & Logy blew me away when I first played it nearly two years ago. It marked my first brush with the series after initially being intimidated by the whole prospect from looking only at screenshots.

For one thing, I was jumping into the middle of the “Dusk” subseries, not knowing much about the characters or the world outside of what I had tried to read up on before giving it an honest review. I also wasn’t sure if I would appreciate having to deal with so many systems at once, especially when they revolved around a mechanic I had shunned for so long in RPGs - item crafting. 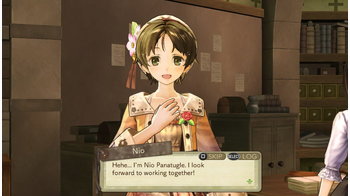 Imagine my surprise when I quickly fell in love with that very system and the world that surrounded it. Sure, one could chalk that up to the numerous revisions and improvements the developers had made to the series for almost two decades now.

The entire look of the games were radically different back in the 90s compared to today. Even Atelier Ayesha had its share of problems as I learned after playing its original release on the PS3 before taking on its remastered replacement.

Atelier Escha & Logy Plus looks to encapsulate all of the great content and beautiful visuals that made the original so fascinating on to the PlayStation Vita, offering a sharper level of detail and packing in all of the downloadable content that was released during its original tenure.

I have begun to really prefer having my JRPG experiences on the handheld environment. Nothing quite beats relaxing during my lunch break or laying on a couch at home, avoiding that feeling of being tethered to a screen to get my fix.

For the Atelier series, this is arguably where it’s at its best, for during large portions of the game, you’ll be gathering different ingredients for recipes and synthesizing new items. Creating new weapons, armor, accessories, and items to use in and out of battle can be incredibly enjoyable. 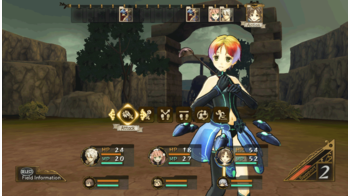 It just feels great seeing Escha or Logy shout out cheers of joy as their Alchemy level goes up and a new, potentially game-breaking item has been created. So, having that on a device that you can take wherever or use while distracted with something on TV helps remove that tedium.

Truth be told, outside of weaving in the downloadable content, there isn’t really anything new in  Atelier Escha & Logy Plus. The more important additions include new enemies, a few new story events, and the ability to have Nio Altugle join your party.

Koei Tecmo also did something a little different here compared to Atelier Ayesha Plus where you are able to access the music library from past Gust titles to edit the game’s soundtrack. Players will have to download the Japanese dub from PSN due to cart size limitations.

However, for those who have yet to give the game a try, you’ll learn to fall in love with the absolutely brilliant combat system and amazing soundtrack just like I did. While Ayesha was a good primer and Shallie was a bit of a disappointment, Atelier Escha & Logy Plus hits that sweet middle spot of giving players everything they could want and surround them with very likeable characters.

While I wouldn’t really recommend newcomers jumping right into this middle chapter of this trilogy, feel comfortable in knowing a great game is waiting for you when the time comes.

More Screenshots for Atelier Escha and Logy Plus 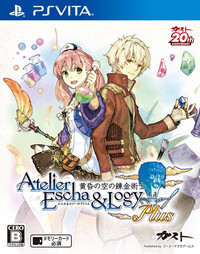