Nippon Ichi generally won't stray too far from their established properties like Disgaea and new games of that ilk, but once in a while they'll get a bit experimental and put out something that doesn't entirely fit their M.O. Their most recent attempt is htoL#NiQ: The Firefly Diary, a mouthful of a title that boasts some interesting ideas. Was the experiment a success? 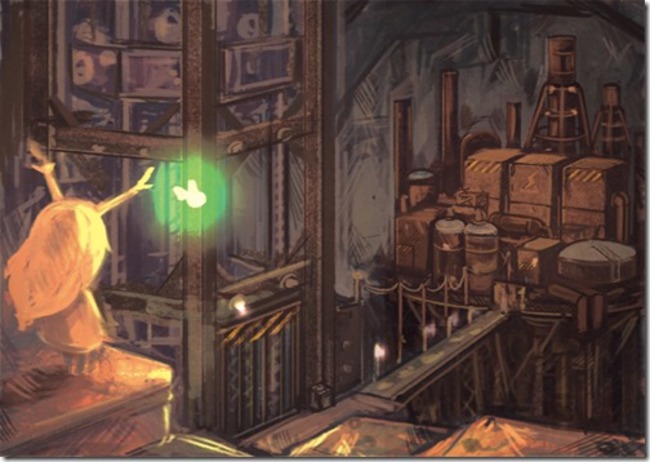 On December 31, 9999, a young horned girl named Mion wakes up in a desolate world with no memory. This is all the story we're given, with the rest relying on the game's visuals rather than any dialogue. The narrative is minimalistic and open to interpretation in many ways, but the dots can be connected via the optional "Memory Fragments" hidden within plant sprouts. These small art-style shifting vignettes give us some insight on Mion's history, as well as the dismal state of the world and how it ended up that way.

You do not directly control Mion, but rather the green firefly that the girl will follow, acting as a sort of cursor like in a point-and-click adventure game. Any obstacles that can be pushed or climbed over will be done so automatically when Mion reaches the designated area. Enemies will appear from time to time, most of which are invincible and need to be avoided rather than fought. Exceptions are the bosses, many requiring one-time gimmicks to be beaten. 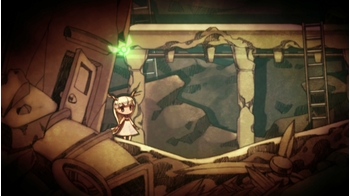 The world in ruin.

Another function is the World of Shadow, a mode reminiscent of Ghost Trick which freezes time and puts you in control of a black firefly that can only traverse the shadows. In this mode, the black firefly can interact with objects hindering Mion's progression such as path-blocking plants and debris, or hit switches that open doors and activate machinery. This is where the game's main innovations lie, with some cleverly-designed puzzles scattered throughout.

The game requires a lot of patience as it is incredibly unforgiving. A single mistake can push you back to a much earlier checkpoint, sometimes when knowing what to do would be impossible in the first place without some trial and error.

This is especially aggravating for segments that involve waiting around, which are far too common. Missed hitting that switch that you have a 0.5 second window for while the player character lies motionless on a slow-moving conveyer belt?  Too bad, guess you'll have to try again in 5 minutes when the conveyer belt reaches the same spot. 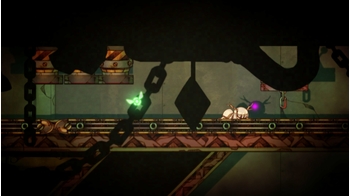 The conveyer belt in question.

On top of that, the controls are incredibly unintuitive. When Mion is latched onto a box or other movable object, the firefly must be positioned directly under her to let go and move again. When in the middle of a relatively fast-paced boss fight, this can spell a quick death. Climbing over obstacles isn't much better, which slow down an already incredibly slow protagonist as she is at the mercy of completely unnecessary character animations which leave her vulnerable.

In general, the controls seem tailor made for an incredibly slow-paced point-and-click adventure game, while the actual levels give off the feeling of a light action experience with puzzle elements, leading to a conflicting mishmash that excels at neither.

The art style gives off the feeling of a picture book with anime features despite the industrial wasteland that a good portion of the game takes place in. Considering the core setting and themes go to some very dark and gruesome places, this makes for some effective art style dissonance.

This is made all the more positively jarring during the memory fragments, which get more grim as the game progresses while maintaining the same cheery aesthetic. 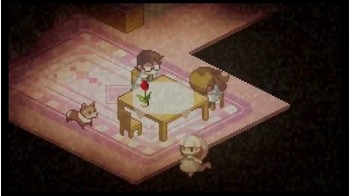 The memory fragments get a bit depressing.

The soundtrack is light, but fitting. Most tracks consist of ambient sounds and simplistic somber tunes rather than involved compositions, contributing greatly to the downright eerie atmosphere that would not be out of place in a straight horror game. Composer Hajime Sugie has helped elevate the experience alongside the art and story.

htoL#NiQ: The Firefly Diary is a dark and atmospheric experience with a good minimalist story brought down significantly by poor controls, abysmal level design and ineffective artificial difficulty. Those that stick with it will find a legitimately powerful and compelling narrative, but the frustration required to get to that point will sour it on every level. 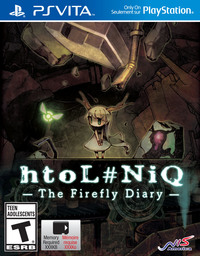 The Guided Fate Paradox
The Liar Princess and the Blind Prince
Disgaea 4 Complete+
The Witch and the Hundred Knight Revival
Disgaea 3: Absence of Detention