Kamiko caught my eye when I first saw glimpses of it in action. Fluid animations accompanying its cute pixel art style seemed like a nice, little addition for my Nintendo Switch. Kamiko is a simple hack n’ slash game, but it’s a bit too simple for me despite its low price. 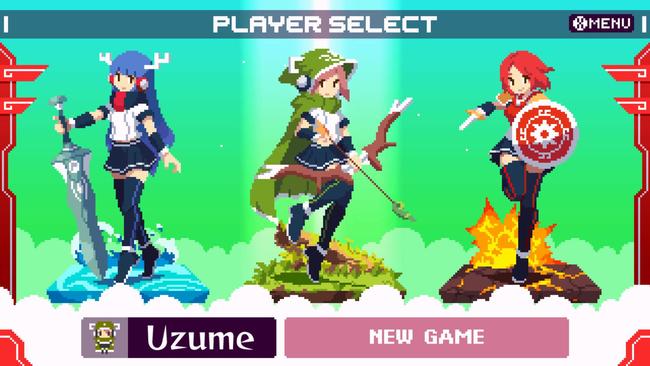 Players are given the option to play as one of three shrine maidens at the start of the game. You can switch to another when loading from the main menu, but be aware that progress between characters isn’t shared. It doesn’t matter much though. They’re all armed with different weapons yet all of them go through the exact same story and stages.

Even the plot beats are identical; just swap a few pixels for their characters and everything is the same. The gods give each the three girls an Imperial Regalia which transforms them into a Kamiko. Their task is to go destroy the demon threat by cleansing the gates that connect to them. Easy enough. Kamiko’s story is quite barebones and forgettable; it tries to be something more at the very end, but it falls flat.

The playable characters themselves are all fun to play. Yamato is a beginner-friendly swordsman that’s suited for close-range combat. Meanwhile, Uzume opts for a more ranged approach with her bow and arrow. Hinome, on the other hand, is a weird hybrid between the two; she’s armed with a mirror that’s used like a boomerang and a dagger when the mirror is thrown. All of their movement is snappy, responsive, and satisfying. 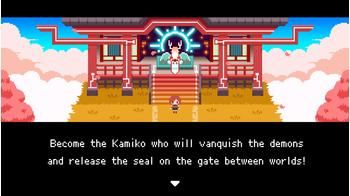 Each of the four stages have the same objective - locate and activate all 4 shrines scattered throughout the map. Doing so will open the gateway to the boss, defeat that, and then you’ll move onto the next stage. Though they all take place in different environments, they all share the navigational systems and mechanisms which disappointed me.

You’ll encounter some light puzzle elements as you make your way to them. Whether it’s activating a switch or carrying a key to a door, I never found any of it too challenging. The only tricky ones that got on my nerves were routes that operated on a timer. Running to them only to ram into an enemy that spawned in front of me had me running back to turn them on again a few times.

Managing your character’s SP gauge is key in Kamiko. SP is needed to activate shrines and open up chests, but it’s also handy in combat. Once 50 SP is accumulated, a character can charge up their attack and unleash a devastating special one to wipe out all nearby foes.

Luckily, SP is easily gained from killing enemies but the amount received is dependent on a combo chain. The higher the combo, the more SP you collect from kills and getting damaged will end it. Balancing your offensive versus utility options is a neat idea for Kamiko’s focus on speedrunning, though I didn’t find myself worrying about it all that much.

Bosses in Kamiko are lackluster for the most part. Only the final boss stuck out to me. If more bosses were as engaging as that boss fight, I would've definitely enjoyed it a lot more. As it stands, the few ones that you take down rely on simplie gimmicks and patterns that take only a few seconds to figure out. 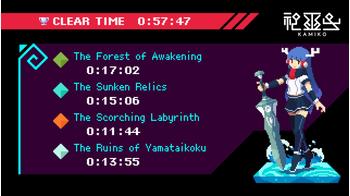 My first playthrough of Kamiko lasted almost an hour. Subsequent playthroughs on other characters were much shorter ranging from 25-30 minutes. It’s a very short game that doesn’t have much meaningful replay value. You can see what the other two characters have to offer and optimize your speedruns as much as possible, but that’s about it.

Still, I found some enjoyment with what Kamiko brings to the table. It plays with a few graphical effects that enhanced my experience. A rainy stage has its droplets freeze-frame when I traveled between teleportation pads. There’s a quake effect (that can be turned off) that adds a certain weighty oomph when hitting enemies.

Its music carries a soothing somber sound. Kamiko doesn’t go for a super cheerful tone that I expected at first glance. There’s a dreary sense of isolation that I found oddly enticing. There’s some solid sound design and cues put into Kamiko, but I have to admit that the sound effect when it saves irritates me.

There are small glimpses that Kamiko could’ve been something more. I liked the rapid gameplay flow it’s going for. Stages are quick to get through and that works for me on the Switch. I just wish there was some variety to them between each of the characters though. For example, a stage could’ve had a new layout and objects in place that only the archer can hit. There’s no harm giving Kamiko a try because of its low price point, but there are much better alternatives.