I've missed the portable Mario Sports games that Camelot used to make. Even on portable consoles, Camelot didn't try to make downsized versions Mario Golf and Mario Tennis, but instead gave the games more of an RPG spin, complete with a storyline and leveling system. However, since Mario Golf Advance Tour for the GBA, we haven't seen any games like it… but that's where Golf Story comes in. The first title by Sidebar Games, Golf Story hopes to recapture the niche that Camelot created—and while it mostly manages to do so, it just misses a hole in one. 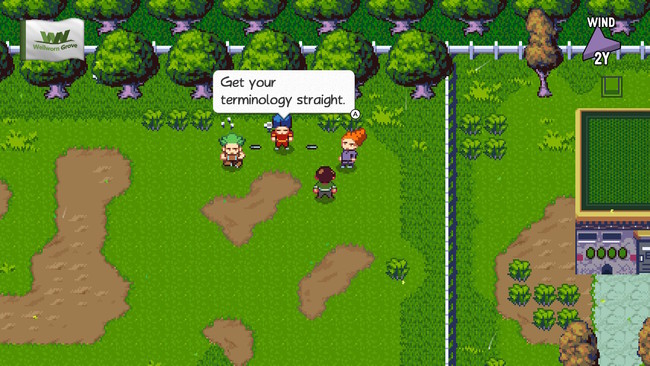 Golf Story tells the story of a young man with one goal, to become a professional golfer. However, things aren't as great in the world of Golf Story, and he has to prove his worth to the seedy owner of Wellgrown Groves, while not being terrible at golf to boot. It's a light-hearted and humorous storyline, with a distinctly Australian sense of humor that betrays the developers' home country. It's fun enough though, and gets you from point A to point B effectively.

You'll visit a variety of golf courses while journeying through Golf Story, each with their own tricks and hazards to take note of. One course has moles that will take your balls and bury them in the sand, and another has tar pits that are even harder to hit out of than normal sand. Hazards and course layouts vary wildly between each area, which keeps things fresh and fun throughout your adventure.

Of course, you won't get far without working on your game and raising your level! Completing the quests and sidequests of the game gets you experience, and upon level up, you'll be able to choose what stats to increase. There are five stats to choose from: Power, Purity, Spin, Strike, and Ability. However, raising Power will lower the other stats (which makes sense since the other four stats involve aspects of shot accuracy) but ignoring Power will make it hard to complete holes on par, so it's important to keep stat increases balanced. This is one of the things Golf Story doesn't really go out of its way to explain, but after a bit of game time what each stat does becomes quickly apparent. 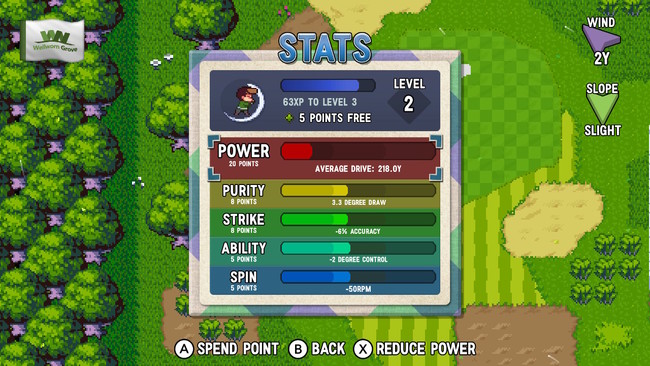 But Golf Story isn't only about leveling up and stats… you also have to play golf! The golfing aspect is pretty arcade-like, but there's a lot that you have to keep track of if you want to have your shots land where you want them to. In addition to aspects like wind and how the ball might bounce when it hits the ground, you also have to time the button presses correctly to ensure a bad shot doesn't knock the ball into the rough.

There are also a ton of options you can use to modify your shot to ensure the ball lands where you want it to land. Of course, there are different putters to use, but you can also lengthen or shorten your shots, use Precision Mode to tweak your shots, and more. It's a bit of a shame that these mechanics are mainly taught in sidequests and there aren't really tutorials to go back to, but thankfully Golf Story does teach you that these options are there and are at your disposal.

The golf mechanics are pretty solid, though I did get annoyed with how Golf Story handles 'perfect shots'. Shots that you line up perfectly are extra powerful, which will take the ball really far. If you're trying for a precision shot and land the button presses to achieve a perfect shot, it is likely that the golf ball will fly much further than you intended it to go. It's messed up me hitting per more than once, so it just feels odd to feel like landing a good shot is not always the best thing to do. 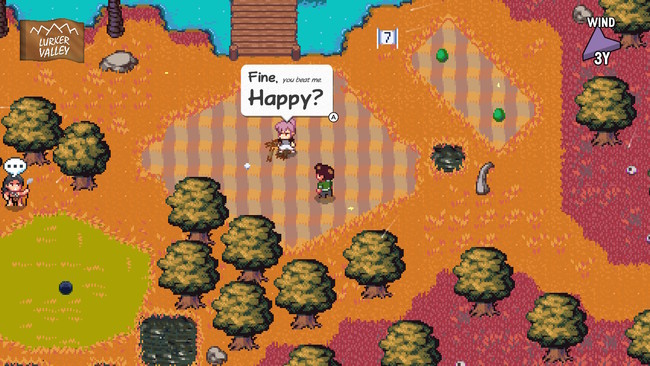 One thing that I feel worth mentioning is that some users are having issues with glitches and bugs. I did not have any issues during my playthrough, but I will mention that Golf Story did feel at times as though it lacked a final layer of polish. Simple things (such as knowing where quest givers are and where to go to advance) are sometimes unclear for no reason, and other times animations or scene transitions feel abrupt or off. It really feels like Golf Story could have used just a little more tweaking, though it's a perfectly fun game as is.

Golf Story is one of those games I'd really like to see a sequel for. While the base game is fun, there are some issues holding the title back in being as good as it can be. Golf Story is a good game, but far from perfect—if you have been waiting for a golf RPG or even just an arcade-y golf title for the Switch, this is a purchase to make.