I share a lot of sentiments with Zack when he wrote about his impressions on VA-11 HALL-A's prologue back in 2014. I have a similar fondness for the cyberpunk genre, especially towards works envisioned from Eastern Asian roots which evoke more familiarity with me. It's always bothered me that too few titles have touched the genre in the domain of video games, especially when the medium itself seems to be the most suitable platform for common cyberpunk themes. It's why I appreciate VA-11 HALL-A's addition in this short number of entries. Although it has a number of drawbacks, I still had a good time playing as Jill through her job as a bartender in this captivating cyberpunk adventure.

VA-11 HALL-A seems to be mainly influenced by titles that were released on old Japanese exclusive 16-bit and 32-bit consoles that were released in the 80s. It was even directly referenced in the game itself as PC-9x referring to the different console series. The retro cyberpunk settings of those games were certainly an aesthetic dream, encapsulating a vision of our society placed in a dystopian future where technology has seeped into people's lives more than ever. To top it off, the strong anime influence blending in with its art direction often further emphasized its fantastical nature that concealed the heavy societal themes usually delved into in the genre. In the similar veins of legendary anime Akira and Ghost in the Shell, VA-11 HALL-A seemed to have captured that envisioned setting. Almost.

At the end of the day, VA-11 HALL-A is still a non-Japanese title developed in the West only possessing the vibes of its inspirations through its aesthetics and core themes. Once you get a taste of its writing style, it's a Western game through and through. The heavy presence of anime and idol culture is written in their Western depictions specifically within the anime fandom, providing an interesting combination of east and west in the game. However, this would contribute to the writing's imbalance in quality.

It was coincidental that I played most of the game in December, which aligned with VA-11 HALL-A's time period ingame. VA-11 HALL-A is an end-of-the-year personal tale spanning from around mid-December until the new year. The prologue from 2014 has been tweaked too and is playable on the title screen anytime. For the majority of my December, I spent my nights as Jill in her bartender job. It made the game more gratifying to have that synchronization. Unintentionally it may have contributed to what I think of its overall quality, but I think that either way, it would have still hooked me in.

Jill is a great protagonist. It was also quite easy to resonate with her because I share some of her personality traits. She's a bit stoic yet also emotional; she's picky on whether she wants to be vocal or not, even if she's seemingly talkative due to her job as a bartender. Having a sense of jadedness yet also being cheerful and sensitive at times made sense, especially in the dystopian setting of Glitch City where there are high levels of societal conflict and oppression.

One of the main reasons I love cyberpunk is its futuristic setting magnifies on themes of existentialism, relationships, and sex. VA-11 HALL-A's story has all these three but it doesn't have an extravagant plot, it's purely a slice-of-life adventure. It's also pretty short, which slightly affected the game's pacing as a whole in a negative way. The writing itself is a hit or miss, as it sometimes drips too much in silly western depictions of anime without any relevant purpose.

Although it is the intention of the writer to break away from certain character stereotypes, some of them were inappropriately explored. It's disappointing, especially for a game that attempted to comment on the representation of societal issues. For example, there is Dorothy, one of the game's unforgettable robot characters. Without going into spoilers, her story did a good job of presenting her as a mentally 24-year-old sex worker that prides herself on healthy consensual matters with her clients. However, not much thought was put into making her a character of the loli archetype and the baggage that comes with that trope.

Although the developers went ahead to explain the reason for her appearance to be out of making the narrative bolder, it ended up being superficial. There is inadequate understanding and research done behind the anime archetype's culture and the implications it can have on the topic of underaged (whether they actually are or only in appearance) sex workers and lolicon. It's a discussion very complicated on its own, and I wish that the developers hadn't bothered touching this territory if it was going to be a normalized issue not appropriately explored in the game's setting. I still loved Dorothy because she has a great personality. However, they failed in what they wanted to achieve in improving representation for sex workers.

This is just one of the instances where the writing's imbalance in quality would show. When it seems like it had something meaningful to convey, it would retract and deliver it like a shallow joke they easily brush off. It's like seeing a failed version of Danganronpa's formula. The writing a bit careless overall, but it tried to reach for some depth and I think it found it best when exploring the various relationships in the game. It's in this aspect where I found its unique bartending gameplay to be effective, yet I also wish it had more to offer.

You play through the game with a daily schedule: before you go to work, you'll be in Jill's room where you can do a few different things. On your tablet, you can briefly read up on forums, news, and an idol's blog. Other than your daily encounters in the bar, this is another way of world-building and it's mostly entertaining. You can also go to shops to decorate your room with various stuff you can buy. It doesn't have much purpose though (well, I did feel satisfaction from buying all that idol merchandise) other than helping Jill concentrate at work, which is helpful if you're the forgetful type in noting down orders. You go to work once you're done, and special story events (too few to my disappointment) would sometimes occur in a different setting.

Not much has changed from the prologue's mechanics a few years ago - you mix drinks for people, earn money, and sometimes potentially open up new dialogue choices depending on the drink you offer to certain people. This is retained in the full game and it's definitely effective: paying special focus on a person's order helps forge a good level of relationship with the character beyond the game's boundaries. It gives you a good sense of satisfaction that as Jill, you're doing a great job in your work and as a friend to some characters. The cast is diverse and believable; some characters will annoy you, but there's some you'll grow fondness for. The majority of the cast are females who have relationships of both romance and friendships between them, and it's just wonderful and refreshing to interact with them. I always had a blast talking to Betty and Alma.

It's why the game's linearity in dialogue branching felt a bit disappointing to me. The unique decision-making feature of bartending left me wanting for more because it felt restrictive from what you'd expect. As a result, there's not much variation in the ways you can explore the narrative between different characters, except for meeting certain conditions to unlock different endings. You can play through the game with a NG+ to obtain all of them, but unless you're someone like me who has been captivated enough by its world, going through all of it again without an available option to skip read text can be a pain.

VA-11 HALL-A is a small game in scale, having only around five different scene transitions to navigate through in its entirety. Even with its alluring writing and art direction, I don't think its setting's identity won't be so strongly established without its soundtrack. VA-11 HALL-A's music is simply excellent. Anyone can jam and get lost in its techno beats and new wave elements, a bit reminiscent of Yoko Kanno's work for Ghost in the Shell. You can actually make your own playlist out of the soundtrack in the game as it's part of your job as a bartender. I initially complained over the fact that it could potentially ruin some strong moments in the story, until I realized that the level of immersion it offers outweighs it.

VA-11 HALL-A is inherently flawed yet it's still a wonderful personal cyberpunk tale. Even with the writing being lackluster at times, I find its cast to be pleasantly unforgettable. I often think about them, Glitch City, and my dreams of the future living through its soundtrack as I listen to it outside of the game. It was worth diving in and have a fascinating peek into that view. And I'd love to return to it anytime. 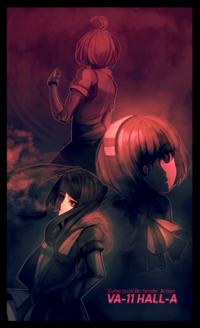