Mike Bithell is a bit of a well-known name in the indie developer field. The creator of Thomas Was Alone and Volume, he manages to create compelling stories with unusual subjects, such as literal blocks. Now, Bithell is trying a new format with Bithell shorts, games that are shorter and a lot more compact than the (admittedly not very long) games he usually makes. The first game of his shorts collection is Subsurface Circular, a sci-fi text adventure. Does this short and sweet format fit well for this adventure, or does it cut the plot short? 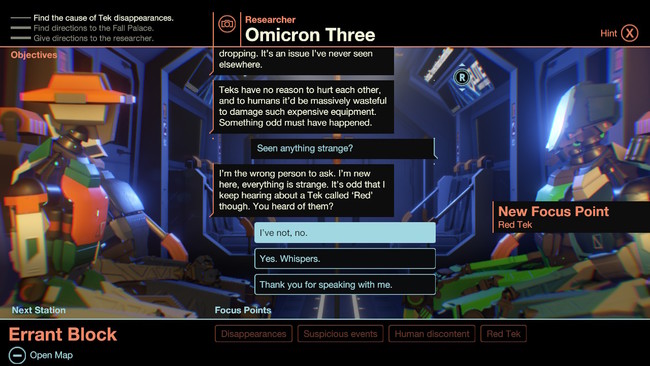 In Subsurface Circular, you play as a Tek, an advanced robot that assists humankind in various tasks, according to their designations. You, in particular, are a detective, and another Tek asks you to look into the disappearance of their friend. They mention that there have been a number of Tek disappearances lately, and leave you to the investigation.

Problem is, you can’t leave the subway car you’re assigned to. So instead of wandering around the town, looking for clues, you have to talk to the Tek riders on board the train, in hopes of getting clues about the Tek disappearances and who is causing them. By speaking to the Teks, you learn of the world you’ve been placed in, and the circumstances of the Teks and humans of this futuristic world, all within the isolated world of the underground subway.

The story-telling method in Subsurface Circular is interesting, as you’re learning about both the case and the general world solely through secondhand observations. The detective Tek your control doesn’t seem to have much along the lines of thoughts or opinions of the world they live in, for reasons the player can only really guess at. Instead, it’s up to the Teks that you can talk to in order to fill in the blanks of the setting, from the relationship of Teks and humans to how Tek society and even religion works. 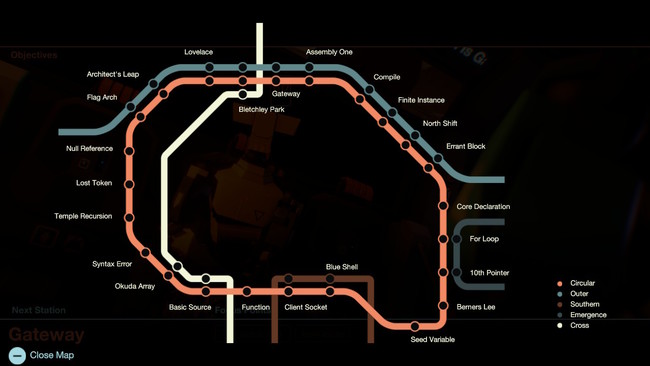 In terms of gameplay, Subsurface Circular is light on it—after all, the title is advertised as a text adventure. When you talk to the Teks, you’ll start picking up focus points, which are essentially keywords you can use to get more information on the most important subjects. The flow of the game is to talk to everyone, unlocking focus points, and then using the focus points on the Teks to get more information and maybe even more focus points. It’s very straightforward, besides a few simple puzzles, and you’re not likely to get stuck at any point. Even if you do, there’s a helpful hint menu that doesn’t berate or punish you for using it, so that’s always available.

Subsurface Circular is labeled as a Bithell short, and that label isn’t a false advertisement. I spent just a little over an hour going through the game and reaching the conclusion, only getting held up on one puzzle for a few minutes longer than I should have. The game may take longer or shorter depending on your reading speed, but this is a very short game that you can finish in a sitting.

Generally, the short format works well for the game—the simple mechanics would likely get old in a longer game, and you’re given enough of a snapshot of the plot and the setting Subsurface Circular to satisfy your curiosity. It may seem a little odd to not see the results of some later decisions you make, but it really fits the way the storytelling is framed. After all, you’re stuck on this isolated subway, suddenly seeing what’s happening in the outside world would be strange. 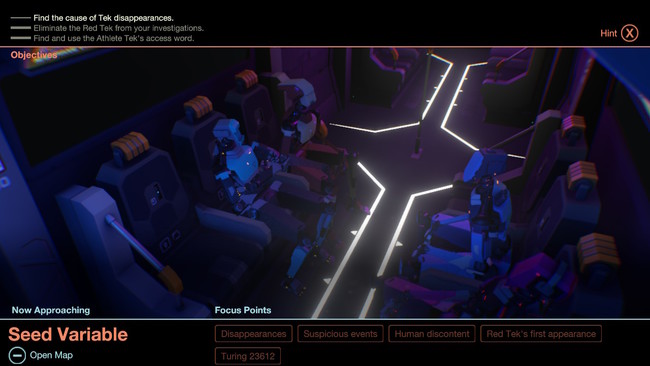 I would fully recommend Subsurface Circular to anyone that enjoys purely narrative games. It’s a short game, but one that gives you a fully realized world in its short playtime. The storytelling method is a bit unconventional and is done well when other games could have easily made it too long. It’s a perfect title for a rainy afternoon play, or for a breather in between longer adventures. You can find it on Nintendo eShop.