Finally, after four years, The Banner Saga trilogy is ending. Everything has built up to a bleak and fevered fight for survival, and with today’s release of The Banner Saga 3, players will finally see things through to the end. It’s not an easy road, and everything is against you, including the game’s own mechanics. But for those that have invested the time into The Banner Saga 1 and 2, is the conclusion to this trilogy worth seeing?

The Banner Saga 3 picks up right after the second game. The final bastion of safety from the darkness is in shambles, with the in-fighting threatening to ruin what little remains as Juno and the Ravens head into the darkness to stop the deadly threat of the world-eating serpent. LIke previous games, the chapters are split between the turmoil in the city with Rook or Alette, and the eerie darkness with Eywind and Juno. While I found the switching back and forth a bit tiresome in 2, it pays off well here, and really drives home the severity of the situation. The end of the world is bearing down on all, and desperation grips the few that are remaining.

This also means, though, that The Banner Saga 3 feels a bit more scripted than the other games. Your choices still matter, and many of the small choices throughout the trilogy translate quite literally into extra time for Juno to get to her destination and face the serpent. However, many of the main events are going to play out regardless of your decisions, and sometimes the game doesn’t try to cover up that fact. For example, Rugga, a character that is a thorn in your side for most of the game, suddenly disappears after a certain chapter, which is oddly uncharacteristic for something that has the tenacity of a cockroach. I had many opportunities to flat out kill him, but I never took them. It seems as though the game’s plot hadn’t entirely planned around that, and simply removed him from the storyline. In the end it was nothing particularly major (there were more important events going on than Rugga causing more in-fighting) but it helped to drive home the point that The Banner Saga 3 is aiming to end this tale, and that it’s important all the pieces are in the right place.

There are different endings to The Banner Saga 3, but they are mostly regulated to the outcome of the final battle and how you answer some narrative choices at the end. It mostly makes sense--the fate of the world depends on these two mages and the small band of mercenaries they practically forced to come with. It may seem like a cop-out but The Banner Saga 3 makes it apparent that the decision has to save or doom the world falls on one person. It fits in well with the entirety of the trilogy and how some of its choices feel futile.

But, while the clear focus of The Banner Saga 3 is the narrative, there’s still something to be said about the battle system. The core of battle system is the same, but generally the battles are harder, to drive the point of a desperate survival home. Enemies will have a lot of the abilities your own characters gain at later enemies. The deadly warped enemies will explode upon death as well, leaving dangerous residue behind that drains willpower. Coupled with the new mechanic that enemies can come in waves, fights can become intense.

At the same time, though, they can also become tedious. Most battles where I could choose to fight another wave of enemies or flee, I usually fled. Characters don’t recover health or armor in between waves, and given how the previous two games worked I didn’t have an evenly leveled party of heroes. On top of that I made some bad decisions that got some of my strongest characters killed, so fighting through hordes of enemies with only a few people that could do decent damage was slow and monotonous. This isn’t the fault of the game per se, and it also does well in making sure any new recruits are able to fill in most holes in your party, but I wanted to see the conclusion to the tale more than fighting another bunch of warped fiends.

Many of the other mechanics, such as supply and caravan management, take a back seat in The Banner Saga 3. It has to--there are no supplies, morale is low, and the darkness is bearing down on the ravaged city. The fate of the caravans rely more on your choices than anything else here, trapped in a what is the last bastion for all the races.

Even if the battles can sometimes feel tedious, The Banner Saga 3 is largely a fantastic resolution to the trilogy. It’s bleak, it’s desperate, and you’ll finally see the end of the stories for these characters you’ve followed for three games. Whether it’s a happy ending or not, though, you’ll have to see for yourself. 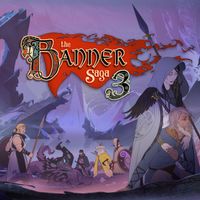