Sizzling in the oven for several years now, Death’s Gambit caught eyes in its initial reveal as its gorgeous sprite models sprung into action with some rather meticulous animation work. Death’s Gambit unabashedly wears its inspiration on its sleeves; elements of From Software’s Souls series ooze through it. The developers over at White Rabbit take the formula in captivating directions, even if the end result doesn’t always work out in its favor. 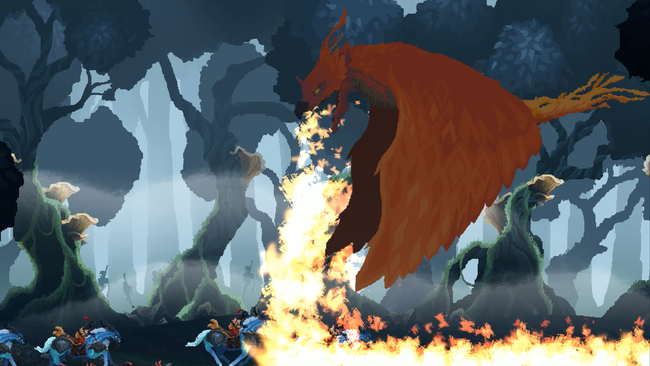 Death’s Gambit has the trademark trappings that defined the Souls games: statues act as bonfire rest spots that allow you to level up, limited healing items refill at those statues as it respawns enemies, a connected world revolving around a central hub that you unlock shortcuts back to, actions consume the stamina gauge, and the whole shebang of its aesthetic interface resembling the Souls games. It’s clearly not trying to hide where its roots stem from.

It doesn’t stop there though. There are clear-cut nods to several other titles like Shadow of the Colossus, Metroid, Undertale, and so on. I often get a kick out of game references like these, but the way Death’s Gambit utilizes them is to its detriment. Remember the dragon that would often swoop in to set the bridge ablaze in Souls? It’s there. How about that iconic colossus with the massive sword in Shadow of the Colossus? It’s no accident that a boss looks a lot like that. At times, Death’s Gambit is like a bizarre Frankenstein's Monster cobbled together with the limbs of different games and its internals sewn together from the Souls series. 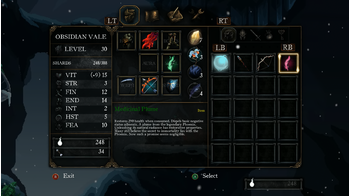 Thus, one of the biggest problems I have with Death’s Gambit is that it lacks a cohesive identity. The game comes off as a bit shy and feels like it needs to implement recognizable entities from well-known games to garner attention. This miffs me because Death’s Gambit had the potential to really distinguish itself if it had a bit more confidence in doing its own thing. In fact, the latter half of Death’s Gambit starts playing around with a few narrative tricks that felt quite refreshing for a 2D Souls game, yet it never leans all-in on it - much to my disappointment.

Despite this gripe, Death’s Gambit looks and sounds magnificently gorgeous. The way it moves reminds me of the impressive feats that Hyper Light Drifter reached. Little details from a boss properly following through on a spear combo or reaching for a spiked shield first before charging - it’s all beautifully animated. There’s something about the sound design that really struck my fancy too. I was so satisfied with the swoosh every time I swung my scythe. Different, unique audio cues for boss attacks made memorizing the rhythm and tempo of the difficult ones easier.

Where Death’s Gambit excels to me lies in its narrative design and execution. Much like the Souls games, the plot unfolds in an enigmatic drip-feed manner. After picking a starting class, a cold open paints a striking image of corpse piles burning in the background as your character, Sorun, tries to make sense of what happened. Sorun enters into a contract with Death as he’s still barely making heads or tails of his situation, yet he forfeits his mortality anyway.

Although story beats are easier to follow in Death’s Gambit compared to Souls, everyone but Sorun is fully-voiced oddly enough. I’ll often run into situations where a compelling cutscene with excellent voice acting is halted by a silent Sorun chiming in. 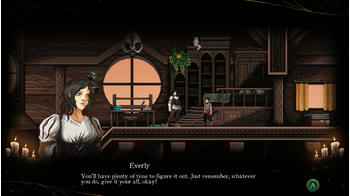 Nevertheless, I found Sorun’s journey to destroy the curse of immortality plaguing the land of Siradon to be slow at first, but it starts to unfold in unexpected ways. Death’s Gambit does a great job slowly steering the narrative direction to a more personal one. I didn’t expect to care much for the story a few hours in, but Sorun’s ongoing relationship with Death and the mystery behind his tangled connection with his mother strangely gripped me as time went on.

White Rabbit also went the extra mile in contextualizing the gameplay loop of life and death. Players of Souls games undoubtedly have been conditioned to expect jumping back into the last rest spot after another crushing defeat. Death’s Gambit plays around with that preconceived notion extensively by including some cutscenes and gameplay segments that trigger only upon death. They delve deep into Sorun’s life before the game began and even tap into his psyche as his deaths continue to pile on. These bits were some of the most impressive stuff that Death’s Gambit has to offer.

As mentioned earlier, seven different starting classes ultimately dictate what kind of build you want Sorun to take up. They all start with different weapons, stats, and some even have exclusive permanent abilities; for instance, only the Blood Knight can recover health recently lost by attacking much like in Bloodborne and the Acolyte of Death has the handy ability to repair broken rest points.

Gameplay builds in Death’s Gambit feel much more restrictive than the norm. All the classes have talent trees that enhance their primary weapon type and their abilities that consume soul energy. Therefore, making the switch entirely to another type of weapon away from your class’s specialization makes its talent tree a tad moot. Notwithstanding these limitations, you can still freely equip a secondary weapon and purchase its skills from the proper vendors. 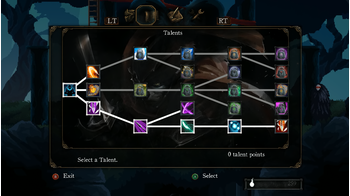 Another significant change Death’s Gambit adds to the mix is the penalties inflicted as a result of dying. You don’t lose your currency shards for leveling and buying items in Death’s Gambit after you die. Instead, a restorative plume (the Estus Flask equivalent) is deducted; Sorun either has to make his way back to where he died to get it back or cough up some shards to get it back. Players can also cut their losses entirely by investing their plumes to raise their attack power even further. Sorun can take them back at any time. If he dies and no plumes are on him since they’re all augmenting him, nothing is lost. This is a pretty intriguing risk-reward dynamic that may seem overly harsh at first, but it proved to be quite pleasant and convenient.

The bosses not only showcase some of the coolest animations in Death’s Gambit - they also present some forward-thinking elements to the Souls formula as well. Clearly spelled out phase number indicators helped in what to expect from their attack patterns and movement behaviors on tougher fights. If you die in a boss fight, you’re awarded with a good chunk of shards proportionate to how much damage you dealt as a light touch of encouragement to perform better next time. Several collectible grimoires also shed some backstory to most bosses along with a damage buff against them.

As much as Death’s Gambit differentiates itself despite its identity crisis, the most critical thing that holds it back is its unpleasantness to actually control. As of the time of this review, I could only move around in Death’s Gambit with the left analog stick with no option to use the D-pad. This issue compounds upon itself for this 2D game time and time again especially when it feels so imprecise at moments that ask for somewhat tricky platforming. It also doesn’t help in times of quick thinking when multiple enemies are attacking you at odd angles off-screen. 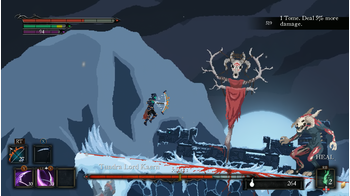 Navigating some of the landscapes was a pain - most notably when ladders and other climbable surfaces were involved. You have to hold down the climb button to remain on them, so I’d clumsily get into loops of where I forgot to keep it held down during a screen transition and I’d fall off immediately back into the previous screen.

Death’s Gambit also struggles a lot with visual feedback. There’s very little visual pushback in Sorun’s model that cue players in that he’s been hit. Most of the time, I’d only realize it after taking my eyes off the action for a split second to check if my HP dipped. The opposite is true as well; hitting enemies does cause them to flinch from time to time, but there’s not a significant visual punch to their models to anticipate and capitalize on it. Sometimes the camera would zoom out for larger scale battles that made it hard to discern what I was doing against the smaller sized reinforcements too.

On top of all that, the game still has quite a few bugs at the time of this review. There were times when my whole level up screen would vanish on certain rest spots. I’ve had my fair share of crashes here and there. The audio would cut out at previously visited areas. It’s still in a rough spot from a technical standpoint, though White Rabbit has been gradually ironing things out. 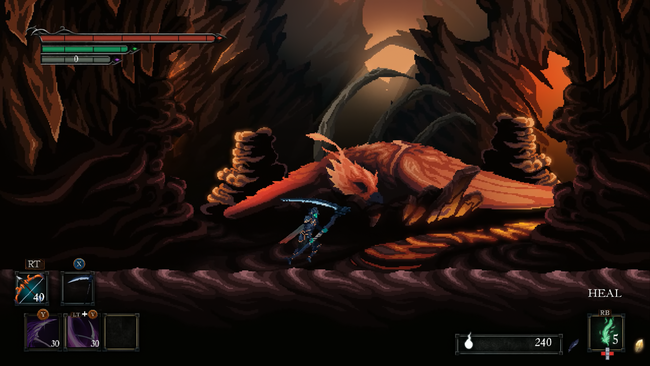 I like a lot of what Death’s Gambit has to offer, but controlling it is vexatious. The game does a decent job establishing a small, captivating story wrapped in a melancholically exquisite world. I wish Death’s Gambit found more of its own voice, since it truly does shine in the moments it tries something new and refreshing. Although it doesn’t necessarily take the concept of adapting the 2D Souls formula to the next level, Death’s Gambit is another solid shot at it.