Steins;Gate is a modern VN classic - so any proposed remake was always going to be met with trepidation. When Steins;Gate Elite was first revealed to be a combination of the original VN and its beloved anime adaptation, many worried that the conversion would sacrifice what made both of these versions of the story great. When it was announced that Elite would incorporate missing portions of the VN interspersed with the anime visuals, some worried that attempting to merge the two distinct versions of the story might ruin the pacing by attempting to appeal to both the anime's plot progression and the VN's at the same time. At first, I felt the same way - but I'm happy to report that in practice Steins;Gate Elite is undoubtedly the definitive way to experience the story.

If you haven't read or seen Steins;Gate, the plot can be summarised as such - Okabe Rintaro, a college student and overall chuunibyou, encounters the death of teenage scientific prodigy Makise Kurisu. Upon alerting his friend and partner in crime Hashida Itaru - nicknamed "Daru" his world becomes flipped upside down, as he inadvertently changes the past. Makise Kurisu is still alive, key historical events have been altered, and it's up to him to figure out the secrets of time travel to return to his original timeline after everything goes wrong. It's a classic for a reason, so if you're just curious whether or not the story is worth experiencing - even if you don't end up reading Elite, both the anime and the original VN are worth checking out as well. 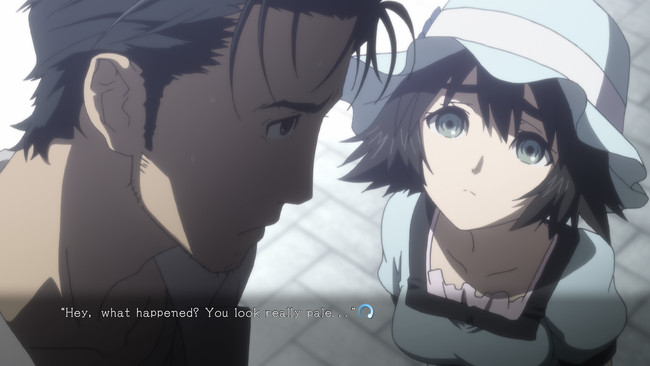 For those of you unfamiliar with the original VNs structure, or want a refresher, one of Steins;Gate's original selling points as a VN was just how much it expected you to play an active role in the story. A button was dedicated for pulling out Okabe's phone, and every so often you'd receive emails and calls from members of the cast that you could respond to, eliciting different responses. Some of these choices with the phone affect what endings you get, and the title's true ending is infamously rather difficult to get your first go around without consulting a guide. Since you had to actively open up the phone menu whenever you received a notice for a new message and to make certain key choices during the story, the original VN was very unique in just how active a role it expected the player to maintain with the narrative. This was further bolstered by unlockable ringtones, wallpapers, and more you could set on the phone to truly make it something personal.

Steins;Gate Elite still contains all the messages and choices from the original VN, however perhaps as a necessary conceit of using anime footage instead of character portraits on pre-baked backgrounds - they've now been made into forced, scripted sequences. You still make a choice, but whenever a new message comes in it triggers a short scene with the phone automatically instead of requiring the player to actively seek them out. This idea of Steins;Gate Elite containing all of the original VNs content, but presented in a slightly different context, rears its head elsewhere as well - since the anime didn't have nearly as much dialogue as the original VN in order to fit within a 24 episode runtime, in order to keep the same script for Elite the anime cutscenes have been altered in order to fit the flow of the VN instead of the original flow of the anime. 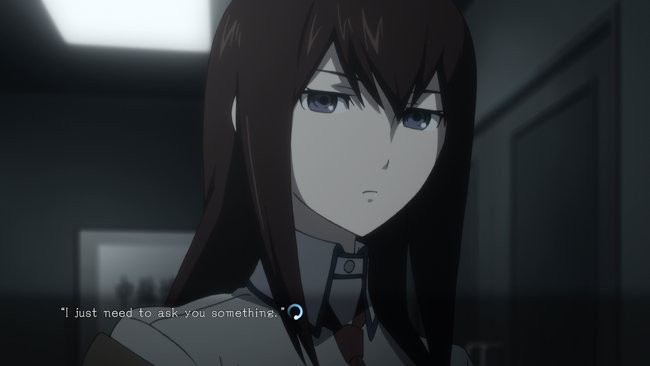 This was, of course, what folks were worried about when Elite was first announced; I can't exactly blame them, either. Since the VN and the anime were originally separate products, and part of what made the anime great was its smart adaptation of the source material to fit within a smaller scope, it was inevitable that either the VN portion of Elite or the anime portion of Elite would have to be heavily altered, with some uncertainty over whether the pacing would make sense once all was said and done.

The good news is that even with the compromises, the added immersion that comes from the animated visuals do much more to enhance the VN than the restrictions that come from including it. The best case scenario was always having the anime's cinematography punctuating key scenes, while also maintaining Okabe's inner dialogue that helped make the original VN so engaging. While it's not a perfect implementation of the anime scenes, it's clear that both the development team and studio White Fox worked very hard to ensure that their inclusion was worth the small inconsistencies; to accommodate the scenes and routes in the original VN that didn't receive an anime adaptation in the first place, entirely new scenes were produced to fill things out. 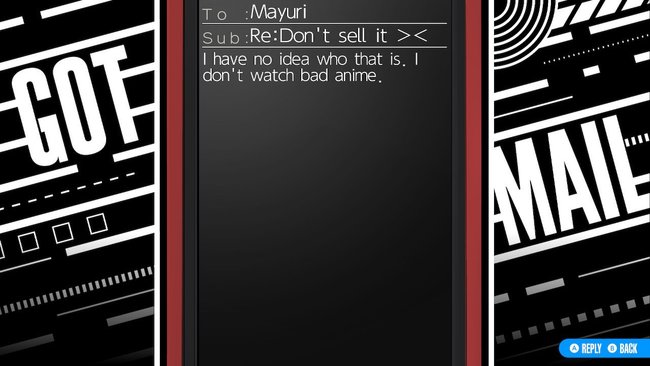 One small thing to note about the title's visuals pertains to the Switch version when running in docked mode. Either due to upscaling lower quality assets, or something of the sort, the Switch version of Elite exhibits some rather horrible screen banding artifacts in some scenes, especially during transitions where any sort of gradient is present. Every other version of the game available is fine, even the Switch in handheld mode. Considering it seems likely anyone opting for the Switch version would be specifically grabbing it for the portability, I wouldn't really dock points for that version of the game, but it's worth noting regardless.

Visuals aside, one thing relatively unchanged from the original VN is the title's absolutely fantastic soundtrack, and legendary voice acting. While fans of the Steins;Gate anime's dub, unfortunately, don't get the option to experience Elite with that voice cast (all dialogue is voiced, and has to be animated, which understandably makes the idea unfeasible), the Japanese cast delivers as one would expect. Just keep in mind that because of Elite's anime cutscenes, some sections with dialogue might have character's lips get desynced if you start going through dialogue boxes faster than the game expects. 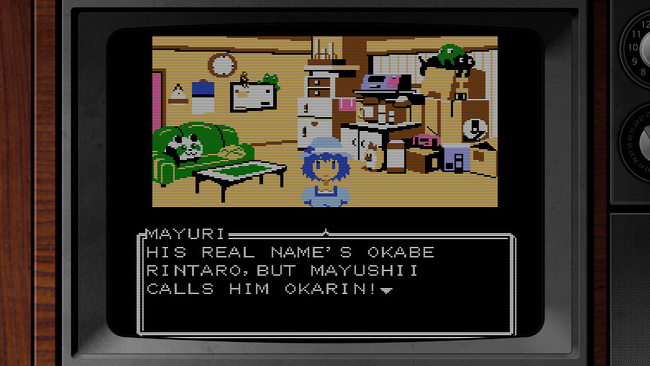 For fans that might not be fully on board with grabbing a new version of Steins;Gate without any extra content, Spike Chunsoft bundles in another Steins;Gate spin-off depending on the platform you choose to pick Elite up on. PlayStation 4 and PC get the fan favorite, first-time-in-English, Steins;Gate: Linear Bounded Phenogram. It's a 20-30 hour VN that tackles a variety of short stories taking place on various worldlines in the Steins;Gate universe. It's basically a fandisc, albeit one that is canon due to the nature of time travel in the SciADV universe. On the flipside, the Switch version comes with 8-bit Adventure Steins;Gate, a title developed on NES devtools, and acts as a sort of demake of Steins;Gate within the framework of an adventure title developed within the limitations of the NES hardware.

We're going to be tackling each of these titles on their own, considering they're both a large enough deal on their own to merit some closer attention. If you're going to base your purchase off of these bonuses, we'd personally recommend the PS4/PC release due to Linear Bounded Phenogram - but there's no real wrong answer here, and although they aren't part of Steins;Gate Elite themselves, they certainly make the package a lot more appealing for anyone that has already experienced the story in one form or another. 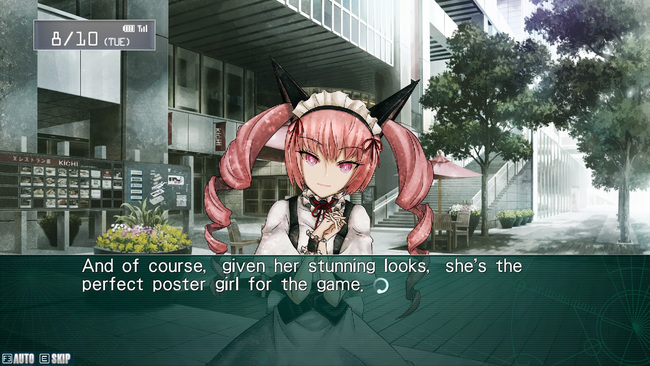 If you've never read Steins;Gate, or even a Visual Novel in general, due to Steins;Gate Elite's unique take on the genre I can't think of anywhere better to start. Steins;Gate Elite managed to combine the best parts of the original VN and its anime adaptation in a way that I genuinely thought was impossible, surpassing the original title in innumerable ways. While the original VN still has its place due to the much more organic inclusion of the phone trigger system, for every other purpose Steins;Gate Elite is now the de facto definitive version of the story. Even if you think you've already had your fill of the story, you might be surprised just how much the changes in Elite elevate the experience. 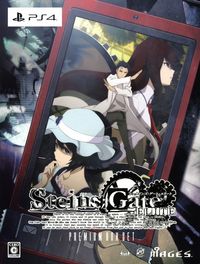