Fate/Extella Link is the direct sequel to 2017’s Fate/Extella: The Umbral Star, picking up shortly after the finale. However, Extella Link feels akin to a side-story rather than what I’d expect from a full-blown sequel to the Dynasty Warriors-esque hack n’ slasher full of historical figures and legends. Nevertheless, it is a remarkable improvement from its predecessor, at least when it comes to gameplay and mechanics. 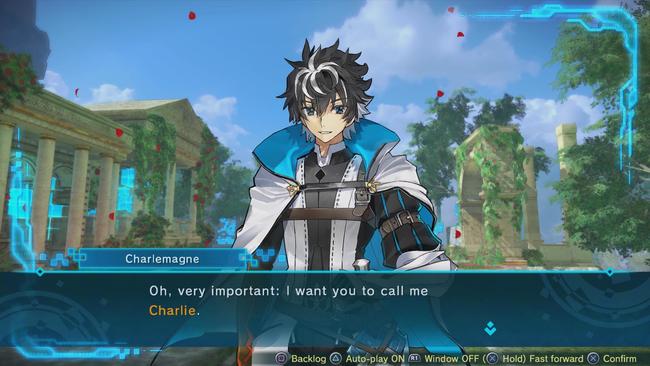 Extella Link’s tale revolves around a brand-new character to the Fate franchise, Charlemagne. He meets and joins up with the main character right at the start, and problems suddenly arise as a new mysterious threat has begun to brainwash previous allies and past foes against them. It’s a straightforward, streamlined plot compared to The Umbral Star. Players who may have grown weary of the text-heavy nature from the previous game’s story mode will find this much more palatable.

Nero Claudius, Tamamo no Mae, and Altera from The Umbral Star take a backseat in Extella Link. Instead of a dedicated route for each of the previous three heroines, the storyline now follows one path that splits into multiple branching paths. There’s initially two endpoints at the start and a third “true” route opens up upon completion of them. There are frequent choices of which stage to tackle next in the campaign, though they’re practically inconsequential. Players can always back out to the stage selection screen to take on the other stage they didn’t initially choose before proceeding on.

I found Extella Link’s plot beats are merely serviceable for the most part; there’s nothing really special about it. Fans of the Fate series will certainly get a kick out of a few key moments with some popular rivalries getting the spotlight. It took me just shy of 14 hours to completely finish the story mode. 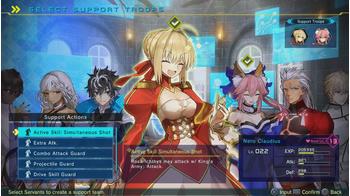 You can now slot in some support characters that'll occasionally pop in to attack with you or defend you.
The entire cast from The Umbral Star return and are all still playable. Most of the campaign focuses on the handful of new characters though. Besides Charlemagne, familiar faces from a lot of other Fate properties make their way into the fray - Francis Drake and Robin Hood from Fate/Extra, Lancelot and Gilles de Rais from Fate/Zero, Astolfo from Fate/Apocrypha, and lastly, Scáthach, Arjuna, and Darius III from Fate/Grand Order. They're all welcome additions in my book and are enjoyable to play. I’m not much of an Arjuna fan, but I particularly liked the way he plays in this game. Decent additions with a few personal favorites of mine like Lancelot and Scáthach were a lot of fun to see.

Although Extella Link’s campaign is relatively slimmer, there are a handful of smart design decisions to make this a more exciting package to play. Firstly, Extella Link feels considerably faster to The Umbral Star - it’s almost as if its standard speed is a turbo mode to it. Several major changes in Extella Link also give it the upper hand above The Umbral Star on top of its breakneck speed.

The irksome Extella Maneuver system has been completely removed and replaced with the Moon Drive mechanic. Upon filling up a meter, players can activate Moon Drive; this not only enhances their attack and defense stats along with a super attack to expend it, but enemies defeated in this mode will also drop items that fill up the gauge to activate their ultimate attack - the Noble Phantasm. Unlike The Umbral Star’s meddlesome treasure hunt for Noble Phantasm items to activate it once per stage, Extella Link’s method allows for multiple Noble Phantasms to be fired off. XSEED Games and Marvelous have also subtitled the dialogue spoken during Noble Phantasm attacks this time around thankfully.

On top of their standard weak and strong attack strings, every character in Extella Link now has active skills they can fire off mid-combat. They learn up to seven as they level up and only four can be equipped at once. After learning all of them, they’ll continually get stronger and lower cooldowns. All of these skill sets are tailor-made per character, though several may share the same properties. A few might get counter stances while others lean into afflicting status ailments or a temporary power-up mode. Despite that, I feel that there’s enough variation so no two characters felt the same. 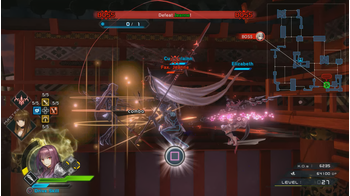 Rush attacks are a great way to make sure that enemies never get a chance to mount an offensive against you and are probably too overpowered.
Some skills have a special class-based property attached to them that corresponds to the numerous classes assigned to characters in the Fate series. When these skills hit other characters in battle, there’s a chance to get them into a juggle state where they’re unable to move as you and nearby allies lay waste to them with rush attacks. Doing so also speeds up your skill cooldowns. It almost feels a bit lopsided since these beatdowns occur often and the AI barely has a chance to counterattack.

Battle objectives aren’t as much of a hassle as The Umbral Star’s odd reliance on tug-of-war to get a stage’s boss to spawn. Extella Link simply has players complete a chain of missions before the boss shows up and the in-game map is considerably better about conveying information of the flow of battle to the player. Crucial information about an ally's remaining HP, where they need to be escorted to, and how long it'll take for someone to travel to another zone on the map is easier to read in the heat of combat now.

Much of the game’s stage layouts are similar to The Umbral Star. Characters will quickly be zipping around sector-to-sector once again to clear out. I also noticed that stage hazards were taken out in Extella Link; no more running into a zone that’ll eat up your HP if you didn’t have the proper defenses against fire or ice. These elemental damage afflictions seem to have been relegated to character skills instead. They bugged me before, so I’m all for this change. Unfortunately, Extella Link still shares many of The Umbral Star’s problems in the same missions getting old fast.

There are a handful of other small quality-of-life inclusions that went a long way for me. Characters can be leveled up with money up to your current highest leveled character as the cap. No one will be underleveled as long as you have the cash and you rack up a lot fast. Not all characters throughout the story join your group, but the game has a toggleable option to make it so previous enemies who don’t canonically turnover a new leaf can still be selected as a playable character - story reasons be damned. 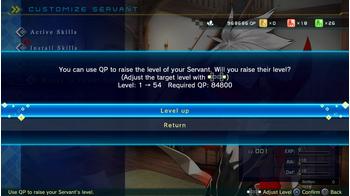 The aptly named Money is Power system is the most appreciated quality-of-life addition for me. No need to grind levels when you can just pay for them.
Other than the main campaign, there are unlockable extra stages that reward new costumes. If you have save data from The Umbral Star, you can transfer that over into Extella Link to unlock a few bonus costumes.

There’s even a 4-vs-4 online multiplayer component. It has a king-of-the-hill style face-off where both teams try to seize control of an area for as long as they can. Thankfully this mode evens the playing field among combatants unlocking almost everyone, all active skills unlocked and maxed, all passive skill slots unlocked and all of the passive skill items maxed from the get-go. The game smartly gives everyone an equal amount of options and it’s up to players to decide how they want to customize their loadout. It’s a fun little side activity though at the time of this review, I’ve only played with bots. I can’t comment on how the netcode will hold up.

Fate/Extella Link is a significant step-up to Fate/Extella: The Umbral Star. Its story may be shorter and more comparable to a gaiden, but I think it’s more important to nail down and refine its gameplay systems first and foremost. It’s a game for fans of Fate and fans of the hack n’ slash musou genre. I like both a lot, so seeing it get significantly better works for me. There are still some things I’d like to see improved with more elaborate stages and better graphical fidelity, but Extella Link tries its best with baby steps in those areas. Regardless, the game is a blast to play. 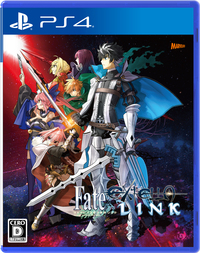