Comparing any given game to Dark Souls is a well-worn cliche that's guaranteed to roll some eyes, no matter the extent that the comparison is justified -- especially for indie games. From Hyper Light Drifter to Dead Cells to Salt and Sanctuary, it feels like there's a new game every year that invokes the comparison to some degree. 2019's edition of this phenomenon is Dark Devotion, a gloomy Metroidvania-Roguelike hybrid that happens to wear its Dark Souls inspiration further down its sleeve that than any of its contemporaries. Unfortunately, by pulling so heavily from Dark Souls while trying to mix in these other influences, Dark Devotion frustrated me just as often as it left me entertained. 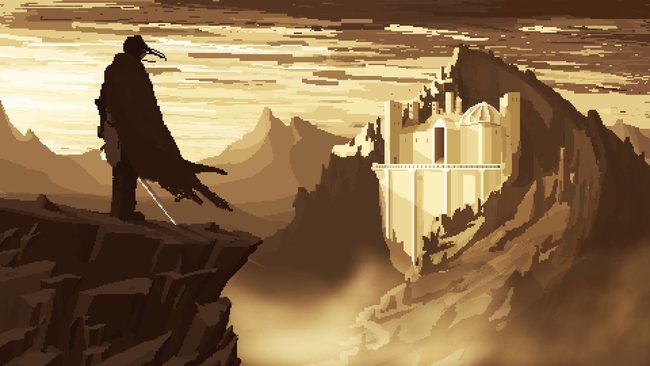 The lonely premise of Dark Devotion is one of the game's strengths.

In Dark Devotion, the player takes the role of a Templar Knight initiate, a young woman who finds herself at the gates of the Ancient Dungeon, a sprawling labyrinth of horrors and monsters. The Templars are depicted as a brutal and orderly society, one that steals children from their parents and instructs them in the ways of combat in order to fulfill their duties to their God. All Templars are eventually called to the Ancient Dungeon for reasons no one can clearly state. It's not until they're inside that the full extent of their immoral disposition is made clear. It's here where Dark Devotion starts out.

In a true Soulsian styling, there is no clear moment-to-moment plot past this initial framework. Characters will speak in vague suggestions of motive and might discreetly reveal their objectives, but there's no singular driving force for the player to continue to travel deeper into the dungeon -- which admittedly pairs well with the nebulous motivation of why the Templars are present in the first place. The dungeon is stratified into four layers, each containing a general environmental theme defining the rooms and monsters that lurk within. You'll also encounter scribbled notes and even surviving templars. Some of these just give hints as to where to find switches or fake walls in order to locate minor secrets while others will play a greater role in providing the background for the dungeon. Many also serve as key context for the dozen or so major bosses you'll encounter. 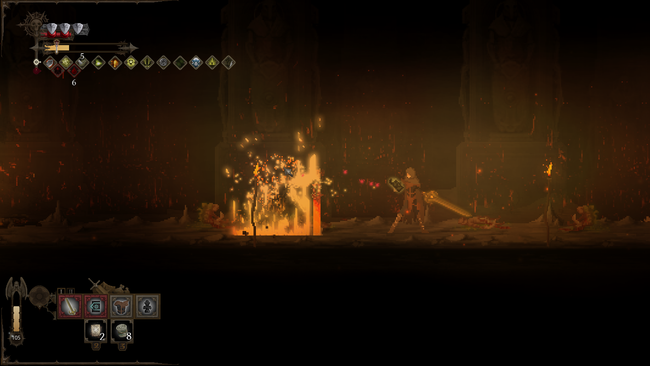 Dark Devotion showcases a legitimately large number of weapon types, each with their own attack styles and weaknesses. Some will have a wide range at the cost of having a long windup that leaves you vulnerable. Others move you slightly forward whenever you swing. Some even come with specific attributes like the ability to steal items or burn down wooden barricades. A few are even cursed, burdening the player with a debuff with the tradeoff of dealing extra damage or some other benefit. Swinging weapons, along with dodge rolling, incur a stamina cost depending on the size of the weapon.

Outside of weapons, the player will also have to worry about their armor, amulet, and consumable items. Certain armor types such as heavy templar armor will provide a great deal of protection at the cost of reduced stamina regen. Others provide less protection but will improve your chance at landing a critical hit. Your amulet/accessory will determine how much health you have under your armor, and will usually also carry a specific boon or debuff along with it such as being invulnerable to fire-based attacks. There are unique consumable items for repairing armor and healing damage, as well as the usual assortment of buffing items, bombs, and keys. 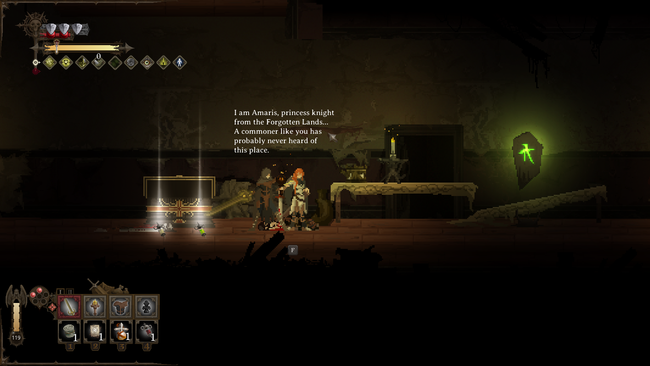 Several NPCs will reside in various locations of the dungeon, some more important than others.

The last two major mechanics are Faith and experience. Faith is essentially a mana meter, though it's used for more than just casting spells. Throughout the dungeon, players will encounter several statues which can have faith deposited in order to open up doorways, grant blessings, or removes diseases and curses. It's a nice little duality to want to be able to cast incredibly useful spells such a shield that can absorb two hits, or to hold onto a full faith bar in the hopes that there's a blessing-granting statue in the next room.

Experience is gained from defeating enemies and is one of the main ways Dark Devotion does not borrow from Souls -- accumulated experience is not lost upon defeat, so players will eventually be able to trade in earned experience for new buffs even if they end up roadblocked at a particular boss. Skills earned this way are divided into a tiered tree of sorts, but some are obviously more useful than others, such as a pure inherent damage or critical chance boost compared to a one-time boost to your armor level.

Altogether, this does result in a surprisingly high degree of versatility when it comes to finding your favorite weapon type and making sure your other gear and skills synergize well with it. 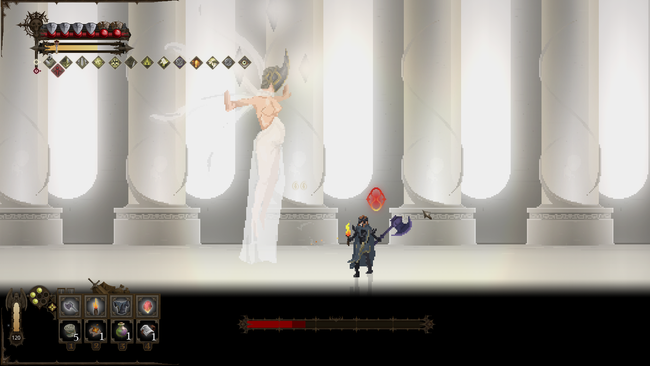 Boss fights are spectacles, but are generally too easy to quickly defeat.

There are two major ways that Dark Devotion strays away a bit from a typical Metroidvania, and the first of which goes back to its Dark Souls inspiration, unsurprisingly. Despite the 2D viewpoint, the templar is unable to jump, and thus there are no major platforming elements of any kind. There are a few occasions of where you must ride moving platforms or even wind gusts, but outside of those instances every drop-off is a one-way street and there's no getting back up once you commit to dropping down to a lower elevation.

This design is exacerbated by the fact that Devotion borrows from a pool of roguelite sensibilities as well. Specifically, while the map might look like any number of Metroid-inspired games, every doorway between rooms is also one-way only and will lock behind you once you enter it. Thus, in order to explore other paths in order to loot different rooms, find new gear or stat boosting tablets, or even to fight different bosses, you'll have to restart from the beginning and start again -- though there are a handful of hard-wired checkpoints to make use of as well.

While this feels appropriate on initial exploration of the dungeon, it frustrates when trying to find alternate paths and having to often restart from the latest checkpoint because you fell off a ledge you didn't intend to, or went into the wrong door before you have a chance to backtrack. It doesn't help that it's not always clear which door in a given room will lead to which possible exit on your map. More than once I found myself just manually resetting because I didn't end up in the place I wanted to, even though I had scoped it out ahead of time. Sometimes this was due to falling down to the wrong platform, others I made a bad guess at which door in a given room I wanted to enter. 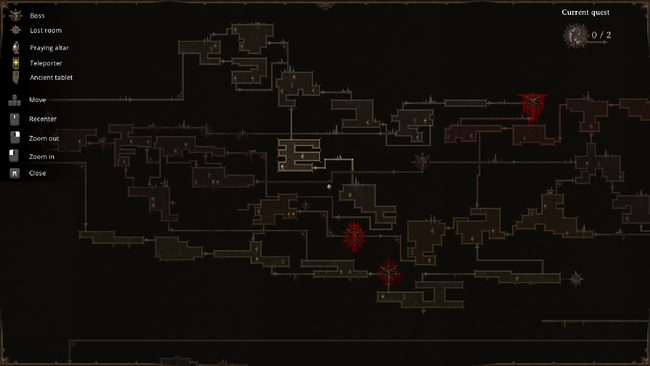 The Ancient Dungeon is a Labyrinth full of optional paths and secrets, but entirely one-way progression often feels at odds with the layout, requiring many restarts.

Another frustrating aspect of Dark Devotion is the seemingly semi-arbitrary nature of the blessings and curses that are given to the player during long expeditions. Minor criteria such as wearing the same armor set or not praying to a statue for a long period of time or even reading an especially gruesome note will incur debuffs on the player without warning. Similarly, upon restarting at the top of the dungeon, the blessings granted at the outset also seem very random, and I often found myself bolstered by several useful boons without being sure exactly why.

This level of arbitrary design also finds itself apparently in the gear that can be crafted at the forge upon the start of a new runthrough. Most gear in Dark Devotion must be acquired on any given 'run' down the dungeon, picking up new weapons depending on whichever enemies you end up defeating along the way. However, some gear that enemies drop can be crafted from the outset once picked up and "learned", but there's no clear indication of which gear behaves this way. So the result is to end up picking up every unique weapon along the way and hope that you unlock new sets at the forge by chance. 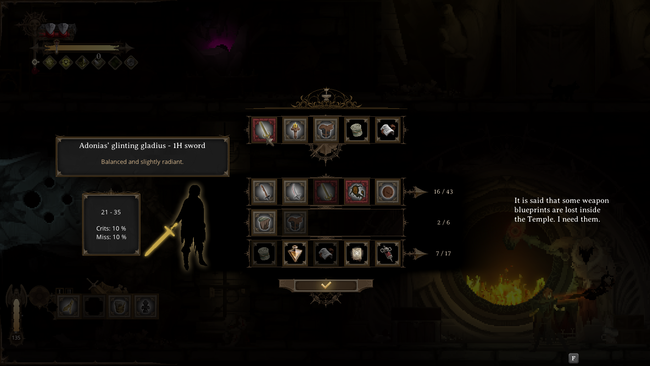 Gathering new equipment and skills makes each trip through the dungeon easier, and the difficulty disappears quickly.

Bosses also drop weapons that can be crafted at the start of the dungeon, but oddly enough, one of the earliest and easiest bosses in the game drops a longsword which easily served me for about 80% of my time with Dark Devotion. I tried out new and fancier weapons as I slew more horrors, but I kept going back to a simple longsword that I earned within the first couple hours. Boss fights in general end up being damage races, with most bosses falling on my first attempt due to the sheer number of blessings, skills, and consumables that I had managed to acquire before reaching any given arena. Very rarely did I have to play efficiently to defeat any given boss up til the very end.

Dark Devotion is a beautiful game that borrows from several of the best aspects of its inspirations, but it ends up sampling too many ideas at once to make for a cohesive experience. The quest design and incentives for exploring thoroughly are hindered by the one-way nature of progression from room to room. Too many benefits in terms of skills, blessings, and gear are given to the player as a leniency for dying, but they also end up trivializing many boss fights which would otherwise be spectacles. The bleak environments and low-density narrative are absolutely a perfect fit, but several of the roguelike and Metroidvania elements just stand at odds with each other too often. Dark Devotion is fine, but fails to stand out.

Indie sidescroller Dark Devotion releasing for PC and Console in 2018

Dark Devotion set to release on PC, PlayStation 4, and Nintendo Switch in early 2019