Unless you’re a massive fan of their work, there’s a good chance that you’ve never heard of Level-5’s hit property The Snack World. Since its initial release on the 3DS in 2017, it has seen adaptations to anime, manga and even its own toy-line, but the series has never been seen outside of Japan. That all changes with Snack World: The Dungeon Crawl Gold.

It would be pretty easy to stuff this review with food puns, but that would be a bit too cheesy. Just some food for thought. With that obligation out of the way, I’m happy to report that Snack World: The Dungeon Crawl is a fun dungeon crawler with great combat and personality, that is held back by a few annoying elements.

Snack World beings with you creating your own simple amnesiac character and adventuring alongside a wide array of wacky characters in a world that’s a weird combination of food puns and commercialism. Although there is an overall goal of regaining your memories and beating the big bad, the plot is mostly nonsensical until the end. That’s not really a bad thing, as the charming little exchanges between characters are enough to get you from one location to the other.

It’s this charm that will initially keep you going throughout. Snack World is very smart, very funny, and also surprisingly full of dirty jokes for a game from Level-5. We’re talking mentions of fetishes, BDSM stereotypes and a lot of other things that had me wondering just what I was playing. Saying that, pretty much all of the characters are entertaining to listen to, and the situations you find yourself in make the gameplay less repetitive. Sure, it can be a little bit full-on at times but how can you be bored when one of your quests has you trying to find squid poop for a princess?  You might think that the endless puns would get annoying but it’s surprisingly endearing. At least, it was endearing enough that I went along with it all and named my character Georange.

Gameplay in Snack World has you going down into dungeons, killing a variety of odd enemies and finding treasure chests. There’s not much more to it than that, and the only thing that really changes is your loadout, the layout of the dungeons and whether or not you’re killing a certain amount of enemies or not. Although this can be a bit repetitive, that is helped by the huge amount of content on offer. You’re looking at 30 hours just to get through the main quests, and a lot more beyond that.

Throughout your adventures, you’ll also be accompanied by “snacks”, which act as your companions on your journey. You’ll be able to collect more by killing them enough times as enemies in the dungeons and through completing side-quests. Although they’re better than nothing, I mostly found them to be not worth paying too much attention to. Saying that, I was consistently impressed by the variety of snacks at hand in Snack World. Almost all of them have really inspired designs, and getting all of them is a fun enough challenge in their own way. You’ll clear these dungeons, go back into town, change your loadout and then do it all over again until you get to a new location.

As you might expect from a dungeon crawler, this main gameplay loop can be pretty addictive. Even with similar designs, exploring the dungeons never fails to be rewarding in some way and I’d often find myself doing far more quests in one night than I meant to. This is in part thanks to Snack World’s crunchy-feeling combat. Because each Jara (Snack World's take on weapons) has a limited amount of use and each enemy is weak to something different, you’ll literally be swapping between them from enemy to enemy. This is done with a press of the button at the game’s insistence, and whilst I initially found it annoying, I quickly settled into the rhythm. Both attacking and moving feel great, and it carries the game through some of the more repetitive moments.

The biggest problem with Snack World is its penchant for being annoying. I don’t mean annoying like, “oh that design choice is a little bit off”, although there is some of that too. I mean annoying like, “if I hear that battle quote one more time I’m going to chuck my Switch off a cliff” annoying. There are so many repeated audio clips and songs that it honestly gets a little bit maddening at times. There are only so many times a man should be made to hear "Oh yeah!" in one gameplay session. If you’re in it for the long haul like I was, I’d recommend playing some music in the background.

It’s a shame that one of the main attractions of a dungeon crawler, the loot, ends up being a bit mixed here too. There are some genuinely cool looking weapons here, but unfortunately, I rarely felt like I was getting adequately rewarded for my efforts. Sure, it’s all down to RNG in the end, but it felt like there were far too many crafting parts given, and not enough of the lip-shaped shields. Still, if you're used to that in dungeon crawlers, it might not bother you much here.

Snack World also doesn’t seem to be able to decide who its target audience is. Although the colourful world and poppy music may seem geared at children, there are a lot of systems for players to learn and some surprisingly difficult missions. It’s all wrapped in cute references to RPG’s and pop culture, but getting through Snack World’s latter half is no cake walk (pardon the pun) and that might confuse potential buyers.

Some annoying design choices rear their head towards the end of the game as well. Most of the game is fairly free of grinding, but to get past the final few chapters you are really going to need to do as many side missions as possible. That’s all well and good, but some of them require you to have specific outfit colours that just really interrupt the flow of gameplay. It’s annoying enough to need to grind, let alone having extra steps added on. At least you can go through these side missions with friends, although story missions are oddly relegated to single-player only.

Even with all of these little problems, it’s hard to stay too annoyed with Snack World. It can be good, simple fun when it wants to be and even in its most aggravating moments, it manages to be carried by a cast of entertaining characters in a bizarre, charming world. 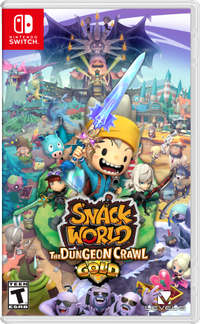