Sometimes you just want to tend your garden and snack on oranges before traveling the sea by houseboat to help out your animal/human/squid-like neighbors. We’ve all been there. Luckily Summer in Mara lets you do just that.

Funded through Kickstarter a little over a year ago, Summer in Mara is Chibig Studios most recent “Zelda-like” adventure game. While there are some visual references to The Legend of Zelda: The Wind Waker, gameplay in Summer in Mara is more reminiscent of the farming sim RPGs many of us grew up with. It thrives in that space between farming sim and grand narrative RPG, but there are moments where its simplistic mechanics begin to weigh it down.

Summer in Mara opens with a beautiful cinematic that introduces us to Koa, the main protagonist and heroine of the story. As a child protagonist, she’s the perfect character. Stubborn and headstrong, kind and always willing to help, Koa is a child that’s just waiting for an adventure despite her extreme naivety. She’s extremely lovable and I couldn’t wait to watch her grow. As the game begins, Koa is on her home island of Mara assisting her adoptive grandma, or Yaya, as she moves throughout the island explaining the history of Mara and daily tasks.

As far as Koa knows, life on Mara is simple and unchanging. She helps with farming and tending to the land as she waits for Yaya to return from her mysterious sea voyages. On one return trip home, Yaya shows Koa the guardian door that the previous guardians used to keep life on Mara alive. Thus the story continues to follow a common tale of protecting resources in a cycle of life and death. When one tree is cut down, another must be planted in its place. Preserving the land doesn’t mean you can’t use it for resources. Summer in Mara instead tells us that the land is there to provide for us only if we provide for it.

Throughout these opening moments, Yaya isn’t just explaining how life works to Koa, it’s also a preview of essentially every activity and mechanic available in the game. This tutorial section was incredibly easy to follow and other than a fishing mini-game, most involved simply hitting Y to interact with a plot of land, hit a tree, or pick up fruit. Not much changes or advances from that point, mechanically speaking. You start with basic tools and a small well that can be upgraded through the main story and side quests. Once you’ve prepared the land, it’s simply a waiting game until the counter above the planted seeds reaches day 0. Gathering rocks and minerals follows the same system. Once they’ve spawned, you simply hold Y for 3 hits and you’re done. While Koa does have a house, you can’t go in it and it instead opens a menu that lets you make tools, craft, cook, or sleep.

After a few days of tending to the farm, cooking, etc, Koa notices a light appear in the ocean. This light ends up being a character named Napopo, who motivates Koa to begin her journey (and the actual game) to islands outside of her home. Traveling in Summer in Mara feels like a throwback to The Wind Waker, with Koa’s boat jumping and swerving along a beautifully animated ocean. The first island available is the island of Qalis, and the side characters that inhabit it are colorful & unique with distinct personalities and relationships with each other.

I felt like there was considerable time spent making these characters real actualized people, and I really enjoyed meeting them and continuing their individual quest lines. Beyond the characters though, Qalis feels empty. There is a multitude of buildings and non-interactable NPCs with their own one-liners, but there’s no detail. Running through Qalis always felt like running through a half-loaded town. Going from talking to such a robust side character to seeing simple buildings and NPCs was a bit jarring. Qalis becomes the main hub in Summer in Mara outside of Koa’s home island, and I wish more was put into a location that I would end up spending most of my time. The same can be said for the other islands surrounding Qalis. They’re beautifully designed islands that are eerily empty with only a few animals or resources on them.

Farming and maintaining a healthy balance on the island slowly gets sidelined when a new force arrives that threatens to deplete Mara of its natural resources. Summer in Mara goes from a game about Koa learning what life is like outside of her home to a story about fighting a technologically powerful force that’s attempting to colonize and destroy the group of islands that make up Mara. It’s within the narrative that Summer in Mara thrives. The quests that take you through it, however, are tedious and often a pain to do. Most require crafting which can only be done at home with recipes that can only be viewed….at home.

I’ve played RPGs throughout my life; I know that fetch quests will often be a part of the equation. However, the quest design here became increasingly tedious. A lot of the main storyline relies on improving tools, new information, and items received through side characters that took a lot of time, rest stops, and travel. Manually traveling by boat so frequently began to feel mind-numbing and dull. The novelty wore off quickly. I understand the storytelling/world-building importance of having to return home often. Not only do you have to travel and meet people to improve life on Koa’s home island, returning home to the place you love and care for is important and creates moments of self-discovery. I wish the implementation was better or at the very least, quicker. While Summer in Mara does have a quick teleport option, it only applies to Qalis. It’s a confusing choice and one of the most frustrating aspects of the game.

It’s easy to spend hours playing Summer in Mara. Some days those hours were enjoyable as I planted an orange grove or fed animals and planned out a very specific sunflower garden. Summer in Mara is most enjoyable when I was able to spend my time doing enjoyable activities that didn’t progress the story but allowed me to make Mara feel unique to me. Being able to talk to characters and slowly learn more about their lives on Mara was one of the better parts of the game. The unfortunate side is that some days those same hours are spent doing the equivalent of busy work. As I went through the game, my main gripe was that while the difficulty of the game and its mechanics are accessible, there comes a point where the game slows into an almost impossible to complete pace.Overall, Summer in Mara has an incredibly strong narrative with character art and light music that only strengthens it. It’s youthful and vibrant, but it also has more somber notes that aren’t always found in farming sims. The only downside is that music and a character driven plot aren't enough to get through all the tedious parts. 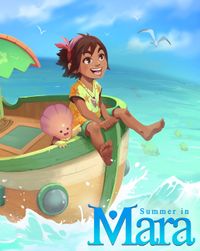