The Paper Mario series is itself somewhat emblematic of awkward issues that can arise when writing for a genre-focused website like RPG Site. Everyone has a different definition of a role-playing game. Sometimes publishers label a game as an RPG, when arguably it's not much of one. Sometimes a game is not billed as an RPG, but has plenty of identifiable RPG elements. Sometimes series like Paper Mario branch out away from the genre, with varying degrees of reception.

Before Paper Mario: The Origami King was announced, but when it was rumored, some hoped a new game would fall in line more with the series' earlier, more RPG-like entries.  Put briefly, it's not that. It's much more in line with the series' most recent adventure game entries - Sticker Star and Color Splash. However, it avoids most of the biggest issues those games exhibited.

Personally, I thought Sticker Star and Color Splash were pretty poor, at least when it came to the gameplay mechanics. Not simply because they 'were not RPGs', more that the systems those games had in place worked against each other or otherwise led to a tedious gameplay experience. In Sticker Star, a specific 'Thing' would effectively be needed in order to vanquish each of the various bosses. If you didn't happen to hold onto the right one, these encounters would end up as incredibly frustrating battles, requiring you to either waste a bunch of valuable stickers or backtrack through the world to go get the Thing you didn't have and come back.

Color Splash went a bit in the opposite direction. While 'Things' were still in place, the game would tell you exactly which Thing you needed. It certainly solved the issue of not knowing which one to have on hand, but bringing along exactly what you're told to isn't especially interesting either. You're just going through the motions. Color Splash had a few other annoyances that simply boiled down to random chance the player had no control over. Battles in both titles largely felt divorced from the rest of the game, too, and almost not worth doing at all.

The point here is, The Origami King is still very much in the adventure game mold, more so than the RPG one. However, it addresses nearly every major irritation I had with the previous two entries, leading to an otherwise charming, clever adventure game without the random, tedious annoyances. 'Things' are no longer a thing, and nearly every issue with poor luck due to random factors outside the player control has been mitigated.

In fact, The Origami King is more like a collectathon game than any other entry in the franchise. For each location in the game, Mario can collect Toads, ? Blocks, fill in holes in the environment, or find the appropriately named Collectibles. Each of these things are individually tracked for each area, leading to a basic but relatively satisfying routine of seeking out the hidden goodies tucked away. For example, in an early game area, Mario can find a classic Super Mario Bros. style flagpole and slide down it, freeing a handful of Toads. Additionally, the flag on the pole itself is actually another folded up Toad, if you look carefully. It’s admittedly a bit of a simple motivation, but it’s satisfying to sift through the world, looking for hidden Toads, treasure chests, and so on. Filling out your collector’s book becomes a primary driving force to exploring the game’s varied zones.

The Origami King has a great art direction, and is surprisingly cinematic in places. Intelligent Systems has really doubled down on the series’ ‘paper’ aesthetic recently, with nearly every building, tree, and piece of the environment being designed with cardboard or other craft paper styles. It's perhaps wearing a little thin, with the past several games really hammering home how everything is 'paper', but Origami King probably has the comprehensive implementation of it yet.

You may have seen how battles in The Origami King are structured on an arena of concentric circles. Before initiating your attacks, you are given time to slide and rotate rings to situate enemies in optimal groupings in order to do damage most effectively. In fact, when you solve a puzzle perfectly, Mario gets a bonus to his attack power, which often leads to a battle that can be cleared in one turn. Due to the strong reliance on the ring movement, battles play out more like puzzles than anything else.

Unlike previous games in the series, battles do not require using up a consumable item for each action performed. There are stronger boots and hammers that Mario gains throughout the game that have limited uses, but money is rather plentiful and your inventory limit is lenient, so I always felt like I had plenty on hand to perform more powerful attacks.

Boss battles flip the script a little bit, with Mario standing on the outside of the ring and the boss in the center. Here, you must rotate/slide rings to create a path to the boss. One small annoyance in The Origami King is how each boss has an exact method that must be undertaken in the right order in order to vanquish them most effectively. However, each boss responds differently to Mario’s arsenal of attacks: his jump, hammer, items, and elemental skills will have varying effectiveness against each boss, and while a few hints are scattered about, you'll often not be sure which to use unless you simply try something to see if it works or doesn't.

This means that oftentimes, the first few turns against a boss are mostly trial and error, figuring out how the boss responds to which techniques and determining the proper order to use them to come out victorious. There are several tools at play such as using coins to add to the battle timer or receive assistance from the crowd of Toads to keep things from ever feeling too unfair, but it admittedly remains a bit of a nuisance to routinely waste turns figuring out exactly what to do, since the rules effectively change for each fight.

Origami King still has an issue where the synergy of battle gameplay to non-battle gameplay doesn't seem to blend quite right. At least you no longer have to worry about consumable attacks, for the most part. However, in the latter parts of the game, I found there still was largely not much reason to actually participate in combat. I had more money than I knew what to do with, and with money being the main thing to gain from battles and the primary thing to spend it on being items for battle, combat once again started to feel like a component tacked on out of obligation more than anything else. In fact, my eventual main reason for doing battles was to gain some confetti if I need to patch a hole somewhere. It's improved over what Color Splash offered, but the synergy isnt quite there.

While the outward storyline in The Origami King is just simple, basic fun like you'd expect in a children's cartoon, the moment-to-moment writing and localization is as strong as ever. Both primary characters and random NPCs are full of amusing or entertaining things to say. Characters are humorously aware of their paper state, leading to some conversations that edge near the broken fourth wall. It's more charming than engaging; a lighthearted romp through some colorful locales.

This game is a silly one, and it’s not afraid to show it. One of the boss creatures is a sentient rubber band ball who is big into opera performances. Another is a picky disco dancing hole punch, who only comes out to battle once Mario and a bunch of Toads perform a dance number in a crypt. Silly and weird, but fun.

The Origami King doesn’t offer a role-playing experience or an intricate storyline. Instead, it offers a charming, clever, and silly world where Mario must collect crumpled up Toads and patch holes in the ground with confetti. I’m not sure if it has much staying power years down the line, but it’s the best 'adventure game' Paper Mario, at least. 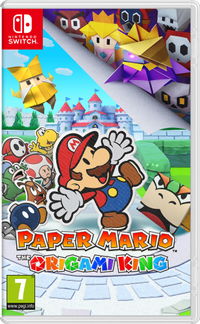