Phoenix Wright Justice For All: spoiler-free guide solutions for every Ace Attorney 2 case

After the truly excellent first entry in the series, it's time for the visual novel mystery adventures of defense attorney Phoenix Wright to continue in Justice For All. Like the rest of this series' original trilogy, this game is very widly available on practically every platform, from PC to PlayStation and Nintendo Switch.

The structure will be familiar if you played the original Phoenix Right: Ace Attorney - you're put through a series of investigations and trials, tasked with finding the truth. This is our spoiler-free walkthrough guide to Phoenix Wright: Ace Attorney - Justice For All - which is the second entry in the series.

Following on from our original Phoenix Wright: Ace Attorney guide, this guide gives you the correct path through every trial and investigation in as spoiler-free a fashion as possible, so you can enjoy the story. Use the handy links to skip to where you're at, or just scroll the page:

Phoenix Wright is having terrible dreams, but that's no excuse - he has a difficult new case to solve. You're thrown in at the deep end, at the trial of Maggey Bryde...

We're staying as spoiler-free as we can in these walkthrough, so we'll simply list the answers to questions posed to you in trial in the order that they appear:

Cross-examination is a key part of the Ace Attorney Formula - you'll be using it right through Justice for All. The game will explain, but to retiterate, you'll get a series of statements. You can 'press' statements to get more information, and present evidence to reveal and prove contradictions in testimony - which can unravel a case. Here's what to do this time:

Gumshoe will now have to testify again.

This causes quite a stir. It's now time for a brief recess in the trial. You'll get some new items to study, and then you'll find yourself back in the trial, hearing testimony from a new witness.

What I Saw That Day - Wellington's Testimony: Witness Cross-Examination

...and with that, your first case - something of a tutorial - is complete! Now it's on to the real deal, with Justice for All ramping up into...

An old friend of Phoenix is in deep, deep trouble. There's a horrifying car accident and a seemingly impossible murder. The pressure is on for Phoenix not just to solve a case, but to save a friend.

It's time for the first investigation in Justice For All. Here are the steps you'll need to take to gather all of the evidence you need today, to prepare for trial - all presented in a spoiler-free fashion, of course.

If you need a break, now is an ideal time - you're still mid-investigation, but time skips forward to the next day...

There's a lot of ground to cover before the trial here, including the introduction of the new prosecutor you'll be facing, who has a relationship with two key characters from the past.

After a lot of exposition, the trial begins.

You'll remember this from the first case; to break a cross-examination, you just need to poke holes in the narrative it weaves. Like this:

You are, as ever, causing a stir - and so it's time for a brief recess. When you return, a friend takes to the stand once again...

Von Karma is furious, but you've managed to quite literally buy a stay of execution. Now it's time to investigate again.

The stakes are raised. Apparently the world is watching. So, let's get to it...

...but the Judge calls a Recess. Once you return, it's back to cross-examination. You are closing in on a conclusion to Justice For All's case 2, mind.

The next case up is, if we're honest, not only probably the weakest in Justice For All, but arguably in the whole Ace Attorney Trilogy - but what do you expect when there are clowns involved...?

Murder is no laughing matter - even at the circus. Phoenix is tasked with defending one of the world's most famed magicians...

And with that, you're all out of time. Things don't quite make sense yet, but that's tough - you now have to go to trial.

Franziska says she has a new witness for you, and the judge calls a rcess - it's an ideal time to save and take a breather, if you want.

When you return to the court room, Moe the clown takes to the stand. Yep. The clown...

Psyche-Lock: Get Over It! (Moe)

Psyche-Lock: About the Wheelchair (Acro)

Things are quite rapidly spiraling out of control, so the judge calls a much-needed break. Save, grab a drink, and settle in for the thrilling conclusion...

The truth is revealed! There's a big old exposition drop here explaining exactly what happened in full detail - if you haven't fully puzzled together what happened and why, it will then make sense.

Back outside the court, say, "I don't think so" and then present Bat's Profile. With that, it's time to move on to a much more exciting case - and the final case in Ace Attorney: Justice for All.

Here we are, at the fourth and final case in Phoenix Wright Ace Attorney: Justice for All. This case involves some familiar things - like the Grand Prix event mentioned in the last case and a familiar character from Phoenix's past...

The judge calls a recess so Phoenix can gather his wits and figure out a game plan. Coming up, a cross-examination extravaganza.

Where I found the Body - Andrews' Testimony: Witness Cross-Examination

When I found the Body - Andrews' Testimony: Witness Cross-Examination

There's a natural break in events here, but when you're ready, press on for things to pick back up right where you left off...

Psyche-Lock: Why Frame Him? (Adrian Andrews)

Events follow, of course, and the Judge calls a Recess. There's more story across the recess period - things are moving fast - and then you're called back into court.

Given you're even presenting stuff in the recess, this trial is non-stop. Very soon, you're back in the courtroom, however...

From here on in, you can get either the bad ending or the good ending to Phoenix Wright - Ace Attorney: Justice for All. If you want to see both, go for the bad ending first - pursue a Not Guilty verdict. This guide, however, will continue to guide you towards the true ending.

And that's it! The end. During the final stages of the game, you'll get one more piece of evidence - the Whip. When given the chance, present it - and then enjoy the credits and bask in victory. 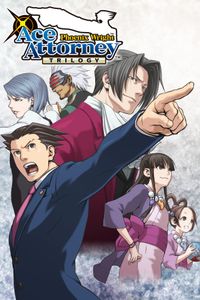