Once you've thought long and hard about which armor you're going to entrust your life to in Mass Effect: Andromeda you're then going to be faced with an equally important question: which weapons should you take into combat? It's not an easy question to answer.

The weapons you choose are going to be influenced by a lot of things, including your choice of armor (how squishy you are will determine your optimal range) and of course your choice of profile or class. Here, we go into detail about some of our top picks. 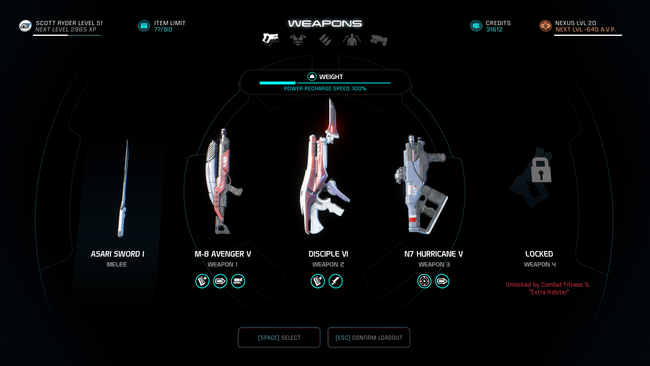 How to change your Weapon Loadout

Which weapons you take into combat can be done through the Loadout menu - an impossible to miss menu that pops up every time you go from a safe zone such as the Tempest or Kadara port into an area that'll contain combat such as planet surfaces. The menu will contain sections not just for weapons, but also for your armor, consumables, squad members and customization of your Nomad vehicle.

You can also access the Loadout menu on the Tempest by going to the room directly across from the Escape Pod room where Peebee is located. This room will contain a Loadout Station. Finally, you can access it from the terminal on any forward station while planetside.

How to get new Weapons

Weapons are available from a variety of sources in Mass Effect Andromeda, and you'll likely want to mix weapons you find off enemies with those you create yourself in order to have the optimum gear for any stage of the game.

To develop new weapons, you'll want to head to the Tempest's research room - the central room just up from the cockpit where you can also deploy strike teams, access your AVP status control and buy and sell stuff from a digital store. Near these terminals is the research & development terminal - this is where the magic happens.

In order to actually research you'll need data - and data points are obtained by scanning various objects throughout the galaxy. Data is split into three categories: Milky Way points cover technology developed in the Milky Way, Heleus points cover Angara and Kett developed weapons, and Remnant points can be spent on researching weapons based on Remnant technology.

Once you have enough data points for the weapon you want, research it through the menu. This won't give you the item - just the blueprint for it. To make that blueprint you'll need to switch across to the development section and create it, and you'll need the correct materials in order to do so.

Some weapons, including some that can't be researched and developed, drop from enemies. There are also a few weapons exclusively reserved as pre-order and deluxe edition bonuses. 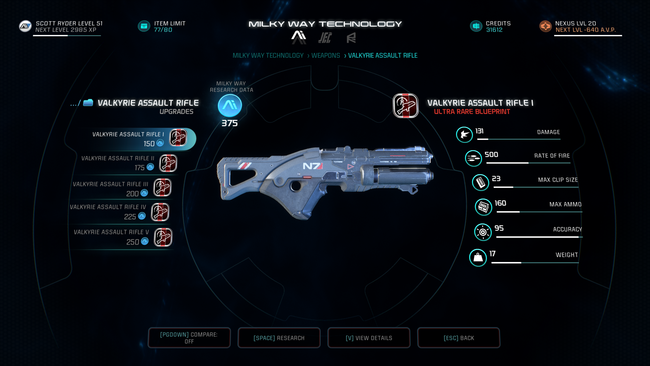 The Cyclone is probably the best all-rounder assault rifle - it has a large maximum clip size, decent accuracy, a strong rate of fire and decent damage. It's a little on the heavy side, however - be warned. It's not a weapon that's going to set the world on fire, but if you need a reliable mainstay with a lot of ammo, the Cyclone is one of your best bets. It costs 100 Milky Way Research Data to initially research.

The N7 Valkyie is an enormously accurate assault rifle with a very respectable damage stat - but there's a slight catch in that the weapon only fires in two-shot burts. If losing the ability to spray and pray isn't a big deal to you, the Valkyrie will prove a great companion for you. It costs 150 Milky Way Research Data to research to begin with.

If you want raw firepower, the Kett Soned weapon is the gun for you. This thing is damn heavy but has the fastest rate of fire around while keeping a very good damage stat to boot. Its clip is absolutely enormous to match the rate of fire, too. It functions as a gattling gun, and will take a moment after you begin firing to get up to full speed. It costs 150 Heleus Cluster Research Data to first research.

The P.A.W. is a remnant technology assault rifle that has one major difference to it - it fires a particle beam rather than bullets. This beam has tremendous range, continuously deals damage and can be used to pick off enemies from afar with a range that isn't quite sniper-like but will reduce any desire you have to carry a sniper. It costs 125 Remnant Research Data to unlock for development. 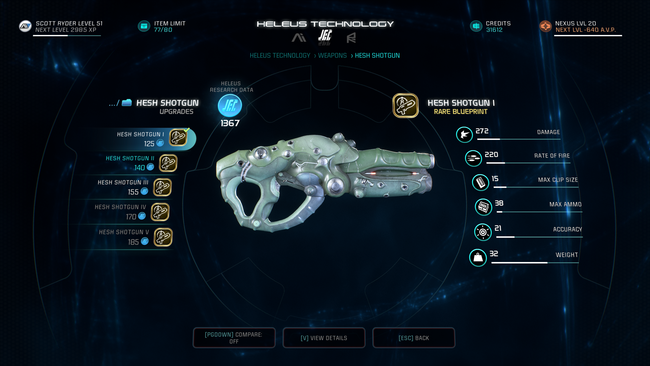 The Disciple is arguably the most iconic shotgun from the Mass Effect trilogy, and with good reason - it was the best. It's still amazing here thanks to a great damage stat and solid accuracy. The catch? The Disciple can't actually be researched and so you're limited to finding them in the world, dropped or left behind by enemies who carried them along from the Milky Way.

Kett war is pretty brutal, and so it makes sense that they'd make this shotgun for that purpose. The Hesh has a large clip size for a shotgun and can fire twice as quickly qas something like the Disciple, but it has a reduced damge stat to compensate for that. It's perfect if you want a large clip and want to be able to spray a little more with a shotgun. It costs 125 Heleus Cluster Research Data to unlock.

Carrying on from the Hesh, the N7 Piranha is the Milky Way's answer to a rapid-fire shotgun. It has a decently-sized clip size but the big difference here is that the Piranha requires no cocking between shots - it's an automatic shotgun, so it can dish out a lot of shots very quickly. It costs 125 Milky Way Research Data to begin developing.

This Remnant Shotgun is the best shotgun at range in the game, since its particle blast ordinance actually tracks enemies to a certain degree. If you want to be able to use a shotgun somewhere other than right in an enemy's face, this is the one for you. It costs 150 Remnant Research Data to get development underway. 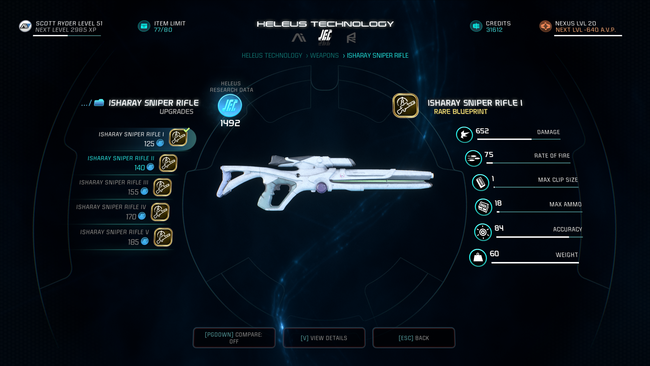 A Mass Effect classic favored by Garrus Vakarian, the Black Widow is a decent all-around shotgun - solid damage, a multi-shot clip, and deadly accurate. If you want a sniper rifle that does exactly what you'd expect it to do with no extra worries or frills, the Black Widow is that for you in Andromeda. It costs 150 Milky Way Research Data to begin developing.

If the Black Widow is one side of sniping, the M-80 Indra is the other side of that coin. Low damage but with an incredible rate of fire, the Indra is more like a very, very long range assault rifle in a way. It's the only automatic firing sniper rifle in the game. It costs 125 Milky Way Research Data to get.

This Angaran-developed sniper rifle fires plasma rounds instead of standard bullets, and has an absolutely devastating damage stat. The Isharay does come with a catch for that - it's heavy, and it also only carries one plasma projectile at a time, meaning a whole lot of reloads. If you don't miss, however, this is a winner. It costs 125 Heleus Cluster Data to Research.

The Naladen is a Kett-developed Sniper Rifle with one very useful additional function: each round fired explodes on impact, burning enemies and causing area of effect damage. This is a great trade off for the slower rate of fire and lower damage stat than many other snipers. It costs 150 Heleus Cluster Research Data to begin developing. 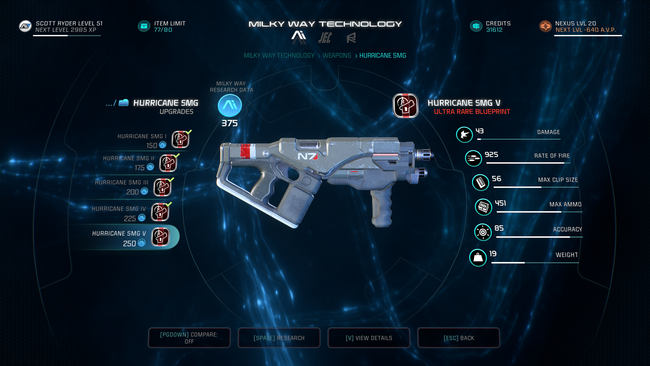 The Best Pistols and SMGs

If you're asking us (and you're on this page, so we imagine you are) the N7 Hurricane is the best sidearm in the game. This submachine gun has an incredible rate of fire, strong damage and a very respectable clip size. It's a little on the heavy side for its class, but it's almost an assault rifle performance-wise. It costs 150 Milky Way Data to initially research.

This remnant SMG features similar features to the N7 Hurricane above but instead of bullets features partical blasts and a heat-based reloading system - meaning there are no ammo worries so long as you use it sparingly and give it time to cool down. It costs 125 Remnant Research Data to begin building.

The Sidewinder was developed by the exiles after they left the Nexus, and it has a look to match - it's like a science fiction version of a classic six-shooter. It looks cool, but is also very light, making it a perfect last-ditch sidearm. Its stats are middle of the road, but its weight makes it easy for any build to carry. It costs 125 Milky Way Research Data to unlock for development.

The Ushidr pistol is of Angaran design and does incredible damage but also has a very small one-shot clip. If one shot is all you need, this pistol will take down many enemies with that one well-placed shot of plasma. It costs 150 Heleus Cluster Research Data to first unlock it on the development side. 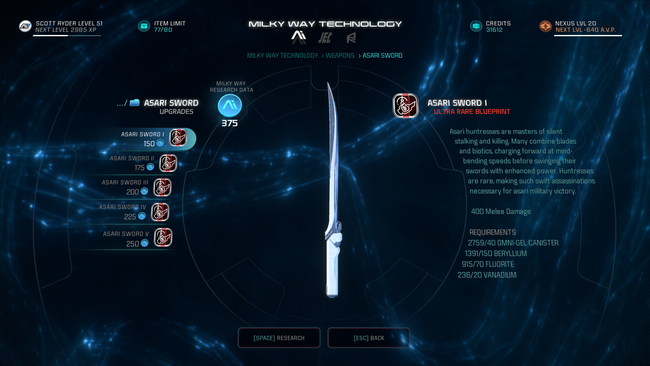 This thing is absolutely insane. This Asari Sword makes you teleport backwards using biotics - dodging an attack, then teleporting back in to deliver an absolutely enormous slice at your enemy's center mass. This sword costs 100 Milky Way data to initially research and has numerous augmentation slots as well. Fast and deadly, for our money it's outright the best melee weapon in the game.

This weapon doesn't have much in the way of range, but it has a fantastic unique property - the Remnant Cryo Gauntlet has cryogenic powers, meaning it freezes enemies it damages. This can be used to perform a devastating Cryo Combo on the enemy. It costs 150 Remnant Data to research at its first rank.

Mass Effect: Andromeda Guide - Choices and Consequences - how to get the best ending