Well, that's what this beginner's guide is for! If you want to play some (or all) of the Dragon Quest series before XI's release, or just want some information on the games, you've come to the right place! This first guide focuses solely on the mainline games and what's best for a series beginner to dive into—if you're interested in untangling the mess that are the Dragon Quest side-series, that guide will be coming soon!

Tell me more about the series!

Dragon Quest is most easily described as Enix's Final Fantasy, although the first Dragon Quest game came out before the first Final Fantasy title. The mainline Dragon Quest titles are all turn-based RPGs, with the exception of Dragon Quest X (more on that later). The series is also well known for sticking very closely to its roots. Therefore, the series isn't quite for everyone; if you do not like turn based, classic battle systems, then it may be hard to get into the series. Additionally, most of the older titles have random encounters, which I understand can be a point of frustration for some.

However, if you're looking classic gameplay in a classic setting, then Dragon Quest is most certainly for you.

Should I play them in order, or can I jump in anywhere?

Most of the Dragon Quest games are not related, so you can play them in any order. In fact, I do NOT recommend playing them in chronological order, as the first two games of the series are quite archaic (even by the series' standards of sticking to older mechanics) and some of the other titles can be difficult for non-fans to get into.

That said, the first six games create two trilogies. I-III are the Erdrick (or Loto for the Game Boy) trilogy, and IV-VI are the Zenithia trilogy. The trilogies share the same world with each other, but that does NOT mean you have to play them in any specific order. For the Erdrick trilogy (I, II, and III), the three games are somewhat close in the games' timeline and kind of use the same world map, but the only real connections are small references and the Erdrick bloodline. For the Zenithia trilogy (IV, V, and VI), each game is set at least one thousand years apart from one another, to the point that even the world maps are different. The trilogy's only real connections are the Zenithian race and the 'legendary equipment' the heroes equip.

In fact, if you really wanted you, you could just start with Dragon Quest XI. But, where's the fun in that?

So, which Dragon Quest titles should I play?

Let's get down to business. I'm going to break the mainline Dragon Quest games into three categories, with the highest recommended titles coming first. For the purpose of this guide, we are going to focus on English version titles.

This is something to note, however. Most of the Dragon Quest titles have mobile ports, and while they come recommended, the nature of the Android platform makes it so that some of the titles may not work with your device. While there haven't been any reports of troubles for any of the versions in a while, but your mileage may vary… but if it's on your phone's Google Play Store, it should work.

Here they are, the cream of the crop. If you want the best representation of Dragon Quest, these three titles are the ones to play.

If there is a single Dragon Quest title you should play, make it this one. Dragon Quest VIII manages to modernize the series' constantly outdated graphics and offers one of the series' stronger plots. VIII also is the first to interduce the tension system, a risk and reward way to try and do more damage to enemies.

Dragon Quest V is the title with the strongest overall plot in the series. It's emotional and plays well on its generational draw. V is also the first mainline title to introduce monster wrangling and party members, which also has plot justification.

Which version to try?  The Nintendo DS and Mobile versions are largely the same (and unlike IV, still has its Party Chat in all versions), so it's all a matter of which version you'd rather play. Thanks to a reprint, the DS versions are an affordable price, too.

Dragon Quest III stands as the best title from the NES era of Dragon Quest titles, and if you want to see where the series began, this is the best one to play to get an idea of its beginnings. III has a class system to help make a team more suited to your strategies, and each character has a personality that affects stat growth. There's also a fair amount of content for an earlier RPG, but is still not as long as the later Dragon Quest titles.

Which version to try?  While the first three Dragon Quest games have been ported to many systems in Japan, most of those ports never made it to the West. Because of that, the best option here is the mobile port. It both works well and is the only modern version you can pick up without an emulator. Otherwise, the Game Boy Color version is the better bet, as it's a bit easier than the NES version and has an extra class to boot.

If you played the three most highly recommended Dragon Quest games and want more, awesome! This next set of games are still pretty great, even if they're not the most recommended titles.

Lots of players really enjoy Dragon Quest IV and its storytelling methods. The first four chapters of the game focus on the various characters and why they are going on their journeys, with the final chapter having the chosen hero gathering everyone together to defeat evil. As the first in the Zenithia trilogy, it has the closest ties to the actual subject of the trilogy.

Which version to play?  Both the Nintendo DS version and the Mobile version of Dragon Quest IV look and run similarly to each other. The main difference is that in the English Nintendo DS version, Party Chat was removed from the game. Party Chat is a function where members of the party can chime in on current events in the game, sometimes offering amusing dialogue or even hints on where to go. While this was removed in the DS version, the later-released Mobile version restored this function. So the Mobile version is a more complete version of Dragon Quest IV, but the DS version is still viable if you don't care much about Party Chat or if you don't want to play on a phone.

Dragon Quest IX is a bit of an odd game. It steps away from being a character & plot driven game like Dragon Quest VIII, and it is instead more or less a predecessor of the MMORPG in Dragon Quest X. Dragon Quest IX even has a local multiplayer that while fun, isn't viable for most Western fans to try nowadays. But, Dragon Quest IX also has the best version of the series' class system, and the gameplay encourages the different strategies cross training in classes provides. IX is worth playing for those that enjoy job system mechanics in RPGs.

Which version to try? This one's only for the DS, so that's the only way to play it!

Dragon Quest VII: Fragments of a Forgotten Past

Dragon Quest VII is a bit difficult to fully recommend, but thankfully with the quality of life improvements from the 3DS remake really makes this title a lot better. VII has a plot that focuses less on the overall world and more on self-contained vignette stories. While this isn’t the only game in the series to try this, it does this storytelling style the best, even if the game's exceptionally long length does eventually get the better of it.

Which version to try? Definitely the 3DS version. Not only is the PS1 version rare and expensive, but it also is missing several improvements, and without them, VII is a long slog of a game.

For a long-running series, not every entry is going to be a timeless classic. While these titles still embody the series, they have flaws or outdated mechanics that hold them back:

The very first game in the series is very simple, but also antiquated. If you've really enjoyed the Dragon Quest titles you've played so far and want to try more, Dragon Quest I is worth a fair shake. Dragon Quest I has a single party member and is pretty short, but also has some tough difficulty spikes that might require you to grind it out.

Which version to try?  Like III, I is only really available on mobile in any kind of modern format. If mobile is really not your thing, you can pick up the Game Boy version that has Dragon Quest I&II together, which helps to take down the NES's original tough difficulty.

Dragon Quest VI is kind of an odd duck. VI has a similar storytelling setup to VII—namely, shorter self-contained plots that eventually feeds into a larger story—but by and large, VII and even IX does it better. Without its plot hook, VI is a very bog standard Dragon Quest game… and while not inherently a bad thing, it's not memorable and there are better titles to play.

This one is by far the hardest Dragon Quest game to recommend. While it does offer a larger world and more party members than the first title, the bigger world map works against the player's favor, making it hard to figure out where to go and what to do next. Given that it's also quite difficult, II is best played with a guide, at the least.

Which version to try?  Like the rest of the Erdrick trilogy, mobile is the only modern way to play II. If mobile really isn't your thing, you can get the Game Boy version of Dragon Quest I&II, which helps takes the games' difficulty spots a little softer.

What about Dragon Quest X?

Dragon Quest X takes the foundation laid by Dragon Quest IX's multiplayer and co-op aspects and turns it into a full blown MMORPG. However, given the series flagging popularity in the West, Square Enix did not think the subscription based title was worth localizing. While unfortunate, it makes sense due to the game's genre and the title being in direct competition to Square's own Final Fantasy MMOs.

Have a better grasp of the Dragon Quest series? Great! Next time we'll try and untangle the many subseries of this long running series.

Dragon Quest IX to hit the Stage at TGS 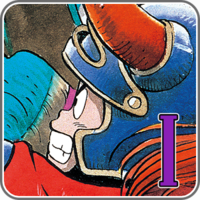