Final Fantasy V may not be my favorite title in the series, but it's the one I find most interesting. It takes the class system from Final Fantasy III and refines it, making it easier to experiment with various classes while keeping most of them useful for the entire story. A lot of the design decisions around the game are interesting as well, allowing you to try some really unusual party set-ups and even break the difficulty in crazy ways.

Have you ever heard of the Four Job Fiesta? It's an annual event where a bunch of people get together to play Final Fantasy V for charity. This isn't a normal playthrough of the RPG, though; instead, it's a challenge run wherein players can only play four randomly chosen jobs for the entirety of the game. Which four jobs you get depend on an ever-expanding variety of rules, but the core of the event stays the same. 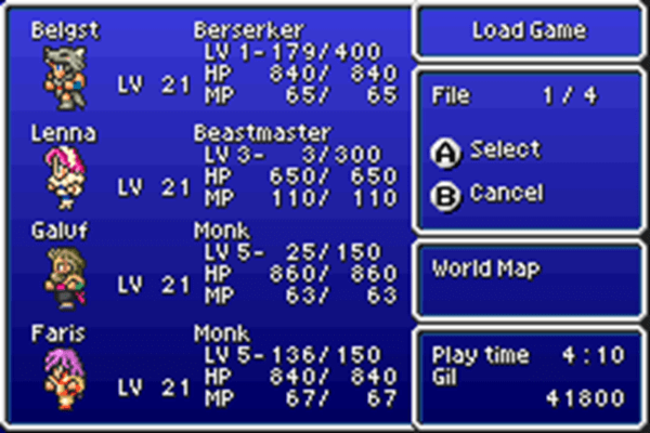 Your party could very well look like this, or worse.

Being limited to four random jobs' skillsets sounds like a nightmare - after all, chances are low you'll get a balanced party, and even less of a chance you'll get a White or Blue Mage for reliable healing. You may not get a Mage at all! But there are a lot of little tricks to get around not having the RPG staples in FFV, both intentional and not, to exploit to get around those handicaps.

For example, you can use the typically detrimental Bone Mail to your advantage in a variety of battles. Bone Mail is the best armor in the game by far but makes the wearer Undead, leaving them in the player's control effectively as a Zombie. While Undead are impervious to a variety of status effects, they can't be healed by normal methods and can't be revived in battle. They're also very weak to Fire skills, but with an item that absorbs Fire moves (like a Flame Shield), you can heal with the plethora of Fire moves or items to keep them alive. If you can work with the Undead disadvantage, you can end up having a party member that can tank a bunch of hits and is easy to heal. 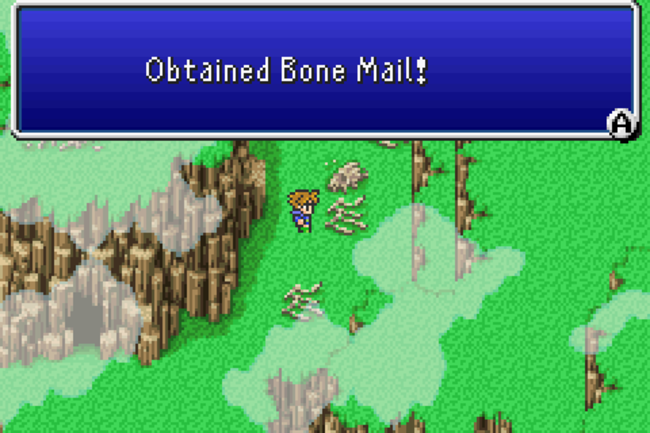 This item might save you in a sticky situation... if you know how to use it.

A strategy like that isn't really something crazy or out of the norm for a Final Fantasy game. It's actually something you can easily replicate in other titles. What Final Fantasy V does differently from most of the others, however, are the boss strategies. Most bosses are weak to unusual elements or status effects that most RPG fans are conditioned to not even bother trying. In the Fiesta, Garula in the Walse Tower can be a hard hurdle to overcome as you only have one class unlocked at the moment. Garula is a hard hitter and eventually starts countering when its HP is low, so if you drew a Mage class, it can be hard to survive the onslaught of attacks. Fortunately, Garula is critically weak to Toad, so you can turn it into a Toad temporarily (as it'll un-Toad itself) and render the boss useless. You can also inflict Blind and make it hard for the boss to hit you, and since it only uses physical attacks, you'll limit how often you have to heal. Of course, if you got unlucky and drew Thief for your first class and lack any physical or magical attack prowess, you can find a hidden Ice Rod in an earlier town, use it in battle, and one-hit kill it.

The variety of strategies and weaknesses for every boss in Final Fantasy V is impressive and makes it so you can work with subpar parties and still beat the game. Twin Tania, a late-game boss that casts the max damage Giga Flare spell, is weak to Death and many other status ailments, though only when it's charging Giga Flare itself. For the final boss, the back-most target is weak to Odin's Zantetsuken, but you have to cast Odin from the Magic Lamp as opposed to the actual Summon spell. Meanwhile, the bottom-most target can be turned to Stone, yet the skill that has a high enough success rate to be useful is the Mystic Knight's Break Sword. 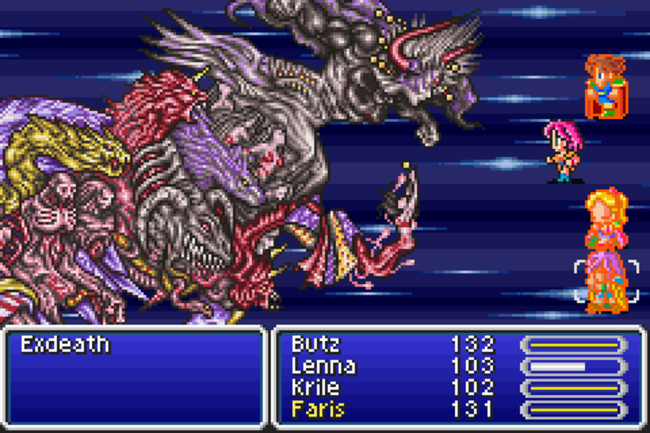 When even parts of the final boss can be cheesed, you know you have a game you can really break on your hands.

Not even the super bosses are immune to weird weaknesses. Shinryu is a nasty surprise on someone's first playthrough. He's hidden in a chest and casts a very powerful Tidal Wave at the beginning of the encounter, which will likely wipe out even a balanced party. However, if you can beat Shinryu's agility, you can Berserk him with a variety of different skills. This stops Shinryu from using his most powerful moves, and although it doesn't make the battle a cakewalk as the boss still hits like a truck, a berserk Shinryu is far more manageable than a normal one. In fact, if you have a Knight, you can make this easy by having the party at critical HP, Berserk the boss, and then make the Knight use their special Guard every turn to protect everyone from his attacks entirely.

Now, imagine not being limited by the Four Job Fiesta's rules, and able to use the full range of Final Fantasy V's skills to your advantage. You can create some truly crazy combinations. Or, you can just create a normal, balanced party and run through the game normally, but where's the fun in that? Take advantage of some of the weird boss exploitations and crush them! Take a look at the Four Job Fiesta tips document and check out helpful pointers on making even some of the less useful jobs more useful! Skip most of World 3 and see if you can get by without the ultimate weapons and spells! Breaking Final Fantasy V can be more fun than playing it.