The world of Onmyoji is vast and provides many activities for players to participate in. Below will be an entry-level explanation to some of the core features in Onmyoji such as Evolution, Realm Raids, and Soul farming. If you are looking for an explanation of core mechanics you can check out our guide detailing that these features. 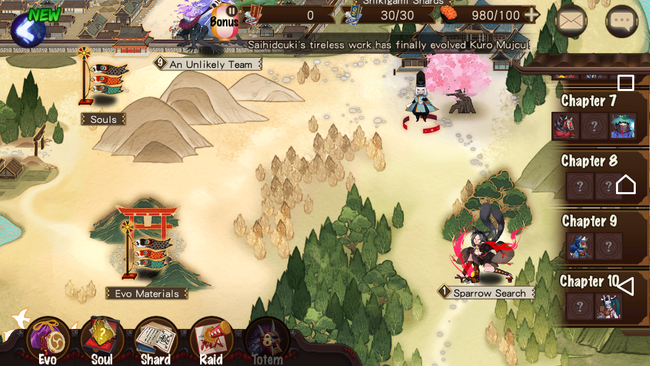 The explore feature can be accessed through the courtyard and opens up new options to the player upon progression. From here players can harvest Souls by completion of previous chapters the player has cleared through the main storyline or through the Soul banner on the map where Orochi and Sougenbi can be challenged. Not only that but Realm Raids can be accessed here, which requires the player to belong to a guild in order to participate in. Additionally, through the Explore feature players can harvest Evolution materials to upgrade their Shikigami to unlock new skills, additional abilities, and skins.

Through participation of activities on the Explore screen, there is a chance that Shikigami can appear and players will be able to challenge said Shikigami to receive Soul shards to collect and, eventually, redeem to unlock the Shikigami. There is also the chance that the Kraken will appear, which is a difficult boss fight and it is recommended three players tackle the Kraken together if one should appear on your map. This boss rewards players generously with high-grade Soul shards to equip your Shikigami with and a random amount of coins. However, rewards are entirely dependant on how much damage you are able to inflict upon the Kraken once its health reaches 40%. If you can do a significant amount of damage and take out the Kraken as quickly as possible once it hits 40% you could potentially be rewards with 6 magatama Souls. 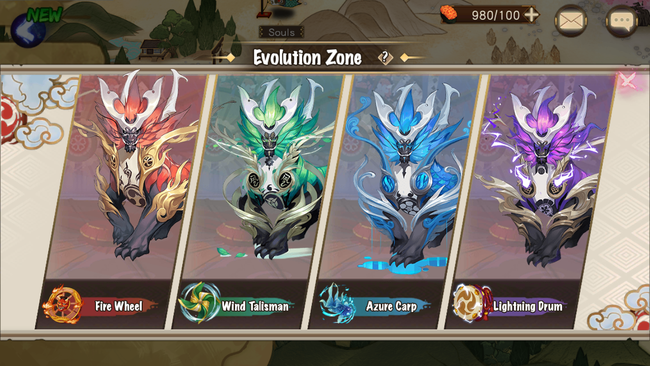 This is one of the most important extra features in Onmyoji as upgrading your Shikigami through Evolution is incredibly beneficiary. Through Evolution Shikigami can learn new skills, upgrade their attributes, and even unlock cosmetic skins. If you find yourself struggling with story content or boss fights it is highly recommended up look into evolving your Shikigami as it will give your team a huge boost of power.

The Evolution Zone is comprised of four different encounters - the Fire Kirin, the Wind Kirin, the Water Kirin, and the Lightning Kirin. Each of these fights will reward players with different element aspected materials depending on the difficulty of the fight and the Kirin you select to engage in battle. 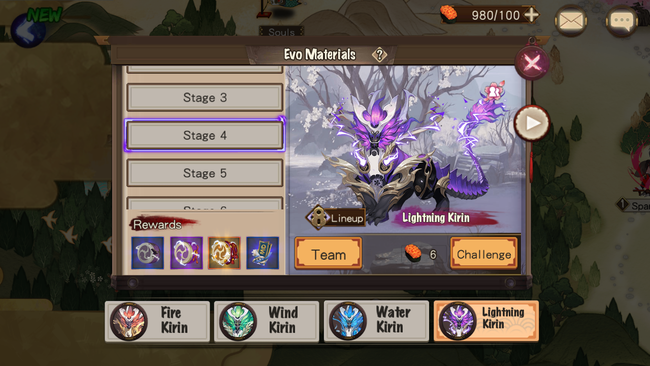 As expected the Fire Kirin will reward players with Fire Wheel materials and so forth. Engaging the Kirins above Difficulty 4 will allow players to farm the higher grade Evolution materials such as Fire Wheel III, Lightning Drum III, Azure Carp III, and Wind Talisman III. If you find yourself unable to complete Difficulty 4 you can also farm Difficulty 1 through Difficulty 3 for the Grade I to Grade II materials and fuse them in the Shikigami Evolution screen to create Grade III materials.

While it can be very time consuming, early Evolution leads to a strong team and better progression through the game. It is highly encouraged to take advantage of the Evolution buffs, which can be acquired weekly through a guild, to gather these materials in a larger quantity with a greater success of Grade III materials dropping. This not only saves you time but stamina, so make sure to use these buffs to your advantage! 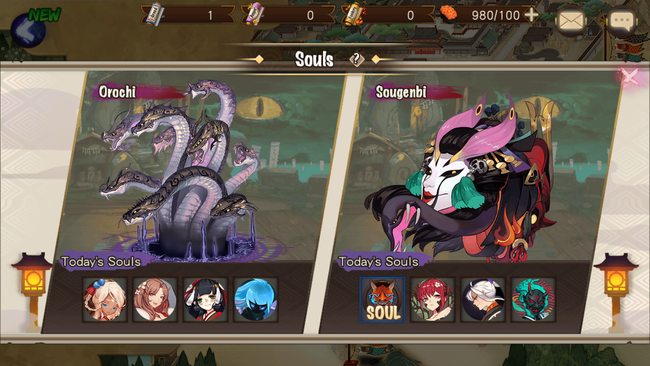 The Soul zone allows for players to challenge Orochi and Sougenbi to receive Soul pieces to equip their Shikigami with. These pieces are rotated daily so it is recommended to look out for the ones most beneficial to your team and to farm them accordingly. It should also be mentioned that players cannot challenge Sougenbi without the appropriate Greed, Anger, and Foolery scrolls which can only be randomly acquired through challenging Orochi.

Beyond Difficulty 3, challenging Orochi can be potentially hazardous to new players. It is advised that those who which to challenge Orochi starting Difficulty 4 and beyond without assistance have a fully evolved Shikigami team with at least one Shikigami that has some healing capabilities; these Shikigami include Ebisu, Momo, or Kusa. 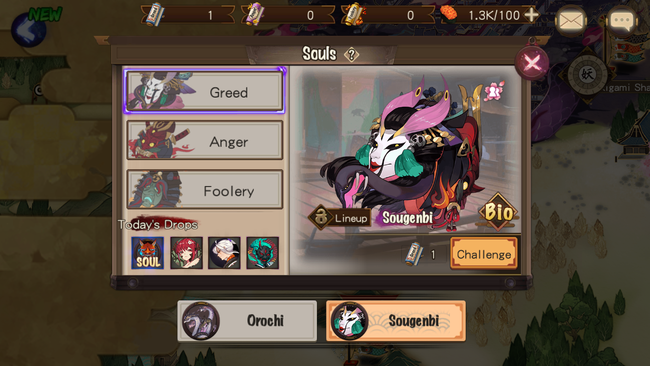 As mentioned above, challenging Sougenbi requires specific items. Once you obtain the appropriate Greed, Anger, and Foolery scrolls you'll be able to engage Sougenbi in combat. Treat this fight like you would Orochi and if you find yourself struggling to make sure to manually control your Shikigami or add a Shikigami like an upgraded Yamausagi to your roster to boost your speed. 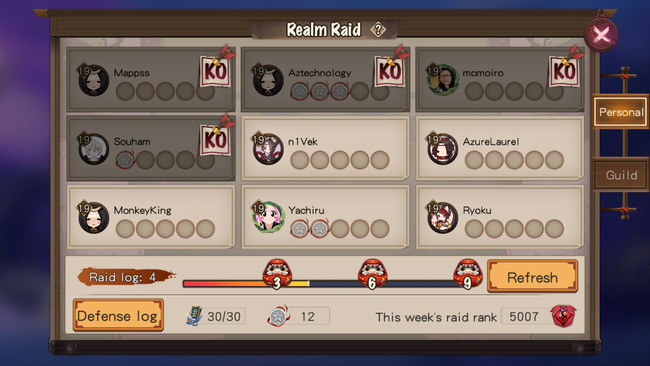 A deviation from the Duel, or PvP, a feature of Onmyoji, Realm Raids allow you to challenge other players by attacking their realms for rewards after you have joined a guild. As stated before a player must be part of a guild and have created their own Realm in order to participate in the Realm Raid function. Through participation in this event, players are rewarded items determined by their ranking and medals through victory. Realm Raids allow players to use six of their Shikigami to battle the Shikigami players have to defend their Realms, however, keep in mind that players need Raid Tickets in order to participate in this PvP-esque feature as well. 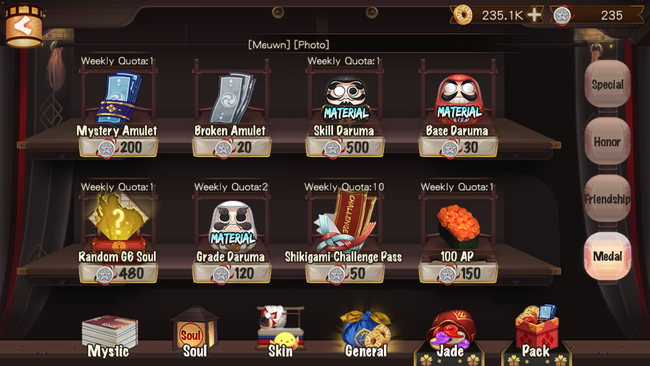 These medals can be redeemed in the shop for items like Mystery Tickets and the different types of Daruma in the game. Medals should be saved for Mystery tickets or White Daruma for later leveling your Shikigami's magatama level. While it might seem like a good idea to save and spend your medals for the Random Grade 6 Soul, it is better to farm these Souls from Orochi or from Chapters on the Explore map.

Onmyoji Beginner's Guide: a detailed look at the English version