After you obtain your kingdom in Ni no Kuni II: Revenant Kingdom, you are quickly introduced to another core mechanic - the Skirmish mode. In this part of the game, you'll take on the role of a military commander as you lead your units into battle to fight off the forces that dare threaten the kingdom of Evermore.

Skirmishes are both very rewarded while also providing a great dose of content for Ni no Kuni II. For some, however, it can be a little confusing working out all the details. That's why in this guide, we'll run down some of the important aspects of the Skirmish mode along with some tips on how to level up your troops quickly!

Check out more of our Ni no Kuni II: Revenant Kingdom Guides:

At a certain point of the game, the overworld map really opens up for you as you're given more methods of traversing the landscape. Whether through side quests or just random indicators on the map, you will end up participating in plenty of battles either voluntarily or simply through the course of story events. 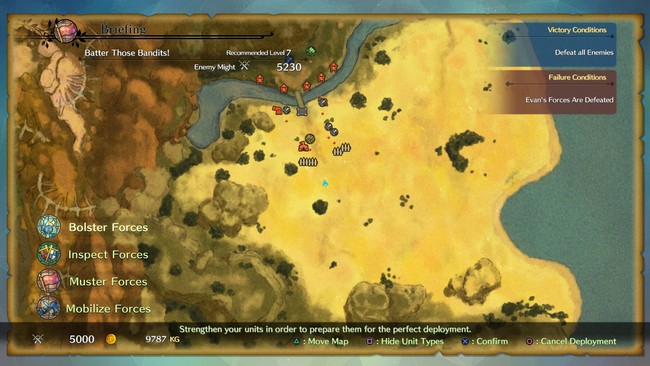 When you hop into a Skirmish battle, you are given four options to choose from:

Bolster Forces
This allows you to strengthen your units through a variety of means. This includes a boost to military might, boost their health and defense, make reinforcements arrive more quickly, and more. Every option under this will cost you Kingsguilders, the currency (separate from the guilders for the main game) that allows you to manage and grow your kingdom. This includes While I wouldn't recommend using any on the low-level battles, it can really make the difference in the more challenging encounters.

Inspect Forces
Inspect Forces lets you look at the details of your units and the ones you will be facing. Some of the details you'll want to pay attention to include their levels, their military might, and most importantly, the different types of units the enemy has. This will allow you to adjust your own units to take advantage of the enemy's weaknesses, which we'll address in a moment.

Muster Forces
The bread-and-butter of the Skirmish mode, Muster Forces lets you choose up to four units to bring with you into battle. At the start, you'll only have two units under your command, but as you progress through the game, you can unlock more units.

Mobilize Forces
The final option confirms the choices you have made and starts the Skirmish battle. 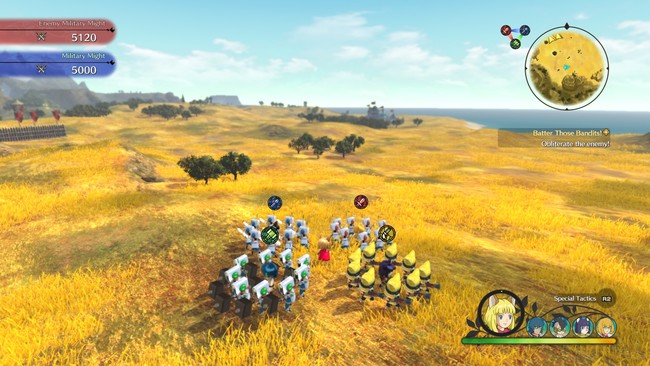 How to Win Skirmish Battles

Right from the very beginning, you'll want to make sure the Skirmish you are hopping into isn't way above your own level if you ever hope to win. Right when you try to trigger an encounter, the game will tell you whether this is the case. Check the Inspect Forces option to best plan out your offensive.

The combat mechanics itself are fairly straightforward. You control Evan with the four units taking up position around you. From there, you can rotate your army around by using the R1 and L1 buttons (if you're playing using a DualShock 4 controller).

On the top right of the screen is a Weapon Triangle telling you which units are strong against what. In this case, it goes Spears > Swords > Hammers > Spears. Pay close attention to the icons above the enemy's head so you can always be fully prepared.

If you're feeling a little outclassed or you don't have a unit that's strong against a particular class, use your archers to full effect. After you retreat a certain distance, the enemy will run back to its starting location. This gives you the opportunity to pelt them with arrows using hit-and-run tactics.

Any losses you have endured can be remedied by holding the Circle button to recruit more units. However, this will cost you Military Might to do so, which is shown in the blue bar on the top left of the screen. Around the map, there can be items you can gather that may replenish your Military Might, so keep on the lookout for those. If things get especially rough, hold down the Triangle button to unleash a nice buff for your soldiers to make them stronger for a short period of time.

There are also two stances you can switch from that are mapped to the Square and X buttons. Square lets you charge into an enemy, while X increases your movement speed to let you move around the map or retreat from the enemy more quickly.

Finally, there are times in a Skirmish where you will be given the opportunity to rebuild enemy structures after destroying them. We highly recommend focusing on the command posts as this will recover your Military Might. Fixing cannons or towers will cost you Might, so make sure it's worth it in the end. 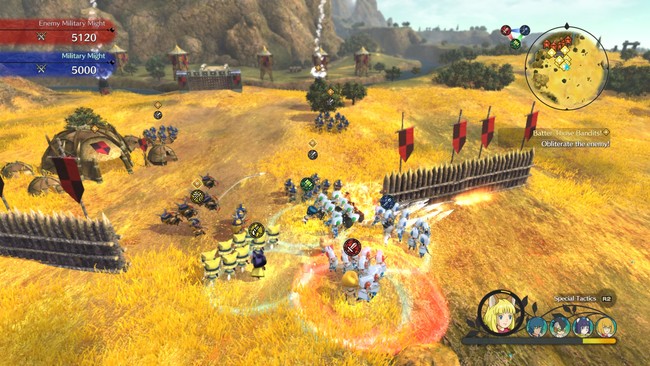 How to Quickly Level Up Your Skirmish Units

Now comes the fun part - an easy, cheap way to level up all your troops without working too hard. You know how we said to make sure the units under your command are of a high enough level before heading into battle? If you just want to grind for levels, you can forget about all that and pay attention to what we're about to tell you.

Go ahead and find the highest level skirmish you can in your area. When you head into an encounter, any enemies that you happen to kill and any levels you gain will carry over even if your entire army is wiped out.

Yes, that's right - you don't have to worry about this even if you Game Over. All you will end up losing is any Kingsguilders you spent bolstering your forces before battle. If you die, all that happens is you return to the flag with all your progress saved.

I gained several levels by doing this, so don't feel afraid to do this yourself. This is also perfect when you have way more KG than you know what to do with, and especially useful in the later part of the game where Skirmishes become front and center.

Of course, there are also buildings back at Evermore that can help you even further. Invest in the Barracks and Training Ground facilities to unlock research that gives you a nice boost to the experience you earn in battle, among other improvements to tactics. This will make all that effort of grinding skirmishes easier in the long run.