Star Ocean: Anamnesis Beginner's Guide: Everything you need to know to play the game

Star Ocean: Anamnesis marks the first time the Star Ocean series has found its way on to mobile platforms. As such, it may be a little confusing figuring out what you're supposed to be doing, especially if you're having a hard time with the tutorial.

With that in mind, we present to you our dear readers a beginner's guide to all the core features of Star Ocean: Anamnesis! Of course, if there's anything you're still puzzled with, feel free to leave a comment below and us or one of our other readers will be happy to help!

Also, if you need some assistance figuring out how Augmentation, Limit Breaks, and Weapon Upgrades work in the game, we also have a guide covering these important matters!

How to Add Friends

Before you are able to add friends to your friends' list, you will first need to complete the game's tutorial. Once you have done so, tap on the Bridge icon and go to Connections on the right side of the screen. After that, you will pull up a section where you are able to invite friends by their Player ID or by inviting any Facebook friends. You are also able to search for any players in the vicinity if you so desire. 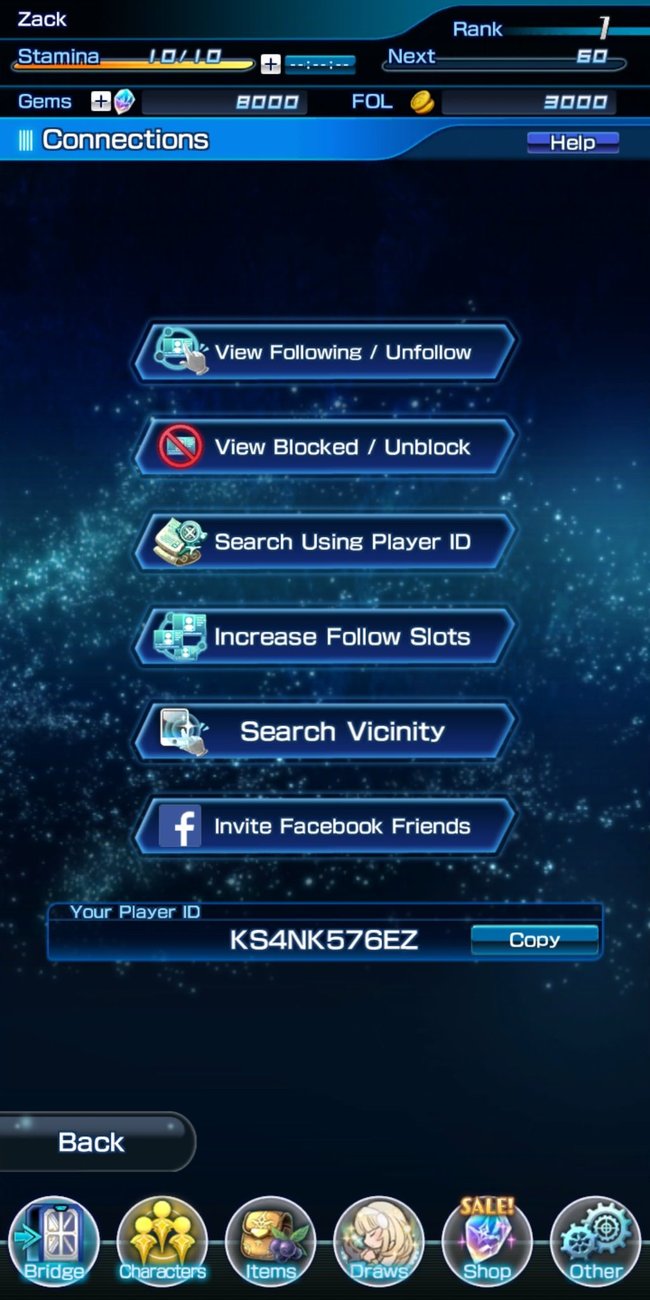 If you'd like to share your account with others, near the bottom of the screen is your own personal Player ID. If your friend has given you their Player ID, tap on "Search Using Player ID" and input it there. After your friend shows up, you can click Follow beneath their avatar to add them to your list. If you want to increase your follow slots, you will have to spend some gems to do so.

How to Participate in Multiplayer Matches

Before you are able to partake in multiplayer in Star Ocean: Anamnesis, you will first need to defeat the second boss on the first planet. This will be Mission 1-23: Man-Eating Cave Survey. Once the mission is over, the game will ask to install additional data to unlock the multiplayer mode. If you want, you can host your own multiplayer connection, you will get some nice rewards, but it all comes at the cost of stamina. You may also join up with random strangers by tapping on the purple Join Forces icon either at the bottom of the event or world screens. The easiest way to hop in is through the Auto Match button which appears after you tap Join Lobby. You won't always be able to find someone else to team up with, so just keep that in mind.

But what if you want to play with your friend? As we mentioned before, you will want to first create a lobby for whichever event you want to take on. After you create the lobby, the game will allow you to invite any friends from your friends' list. This sends an invite to your buddy who will need to Join Forces and then Join Lobby. After that, once they join mutual followers, you can elect to open up the room to the public to get a full party rolling. You can do this by tapping on the Lobby button and change it to Public.

It should also be worth noting that you'll earn 100 gems the first time you encounter new players in multiplayer, so this is definitely worth at least a peek!

How to Switch Your Loan Character

One of the core features of any gacha-style game is the ability to bring a loaned character with you into battle. These are party members from real players who can help you out immensely during a challenging mission. This is also a great way to make new friends while also helping out your buddies in the process. 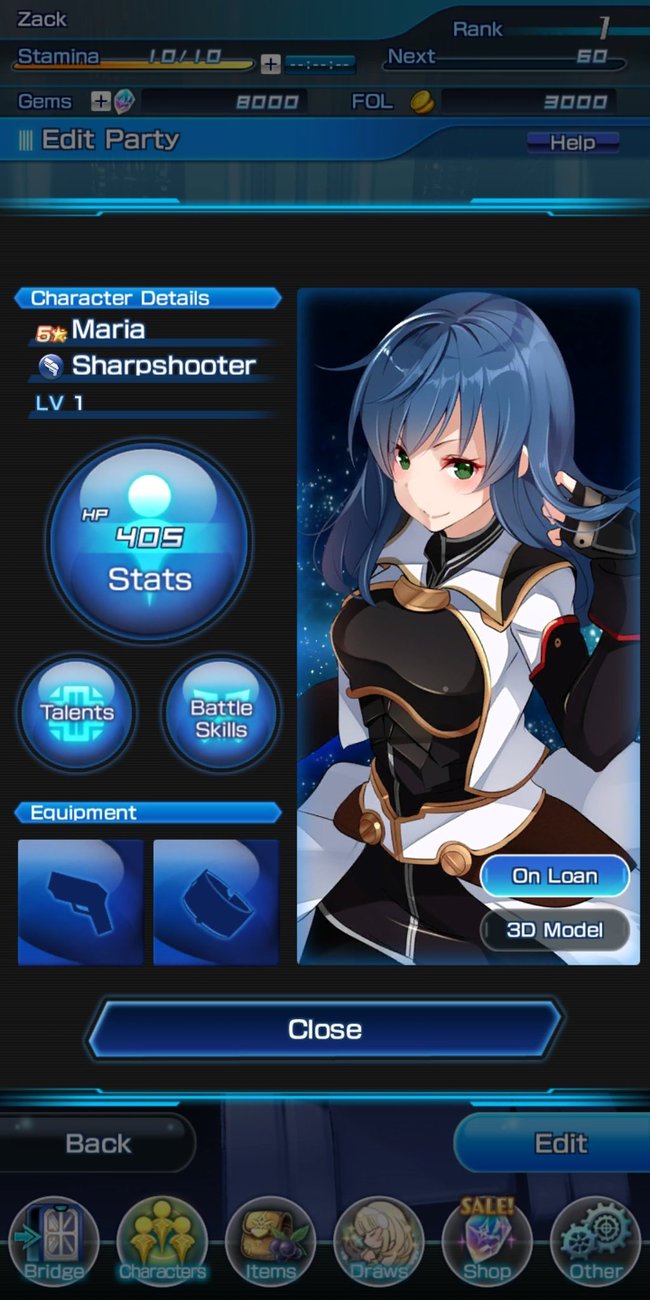 Now, this is actually a very easy process. First, go to the Characters menu by tapping the button at the bottom of the screen. Once you have done so, you will want to tap Edit Party. Choose one of the characters you want to loan out. Press and hold down your finger on the character itself. After you release your finger, the Character Details screen will appear. On the lower right corner of the character portrait, you can tap the On Loan button.

Voila - your character is now available to be loaned out! Just keep in mind this can take a little bit to update, so don't be surprised if they don't show up on your friends' loaned characters list right away. I'd recommend using your friends' loaned characters and ask them to use yours to gain support medals which will be rewarded to you at the start of every day. You can exchange them for items in the Draw menu that will help boost your party members up quickly.

How to Reroll Your Character in Star Ocean Anamnesis

Not happy with the character you chose to start the game with? Fortunately, this is yet another simple solution. All you have to do to reroll your character is to go the Settings on your phone, go to the Apps list, scroll down until you find Star Ocean: Anamnesis, and then clear any cache and install data on the phone. On Android, this can be found under the Storage option once you locate the app. Otherwise, you can just delete the app entirely and reinstall it from the app store.

If you'd rather not have to redownload the app, there's apparently a way to make this process easier if you have a rooted phone. Look for an Aska.xml file located in the shared_prefs folder and delete it. This will clear your account without forcing you to reinstall everything. Just be aware you are dealing with system data, so be extra careful when meddling with these files!

Before we get into what the best starting party is, I just want to make it clear that this is purely subjective. When you go to choose your 5-star character, I would recommend going with a Defensive class person like Victor, because they will help out immensely for the long haul of the game. While you can choose whomever you want, I found that his presence made the game a lot easier to manage - especially since he's a 5-star character.

Also, once you go for your first summon, I'd avoid using the Multi-Roll since you want to save your gems for future events, and instead opt for the single roll so you don't waste your gems. For my beginning party, I went with a Defender, Sharpshooter, and a Caster. Of course, we should be getting better characters soon, so this isn't incredibly important.

How to Link Your Phone

Linking your account is always something I personally consider to be important when dealing with a mobile game that relies on servers to keep your account alive. If you own an Android phone, the game will automatically sync up with your Google Play Games account (which is tied to your email) as soon as you launch the game. That should also happen in iOS devices through the Game Center app. This is the easiest way to make sure your account survives anything that may happen to your phone. To make sure everything is working, you can tap on the Other button on the bottom right of the screen.

Under this options menu, tap the Sync Data option, and you can choose to sync your account data on Facebook or Google Play Games/Game Center. If for any reason you lose your data and want to recover it, on the start menu when you launch the game for the very first time, there will be a Transfer Game Data button near the bottom of the screen. From there, the game will ask you which source you want to transfer your data from - Facebook or Google Play Games/Game Center.

How to Redeem a Unique 5-Star Weapon

After you have installed and started up Star Ocean: Anamnesis, you will receive a launch coin. Once you have chosen your first 5-star character, go to the Shop, then go to the Item Exchange. You should see "Launch Coin Exchange" at the top of the screen. You are allowed to redeem it for one 5-star weapon. 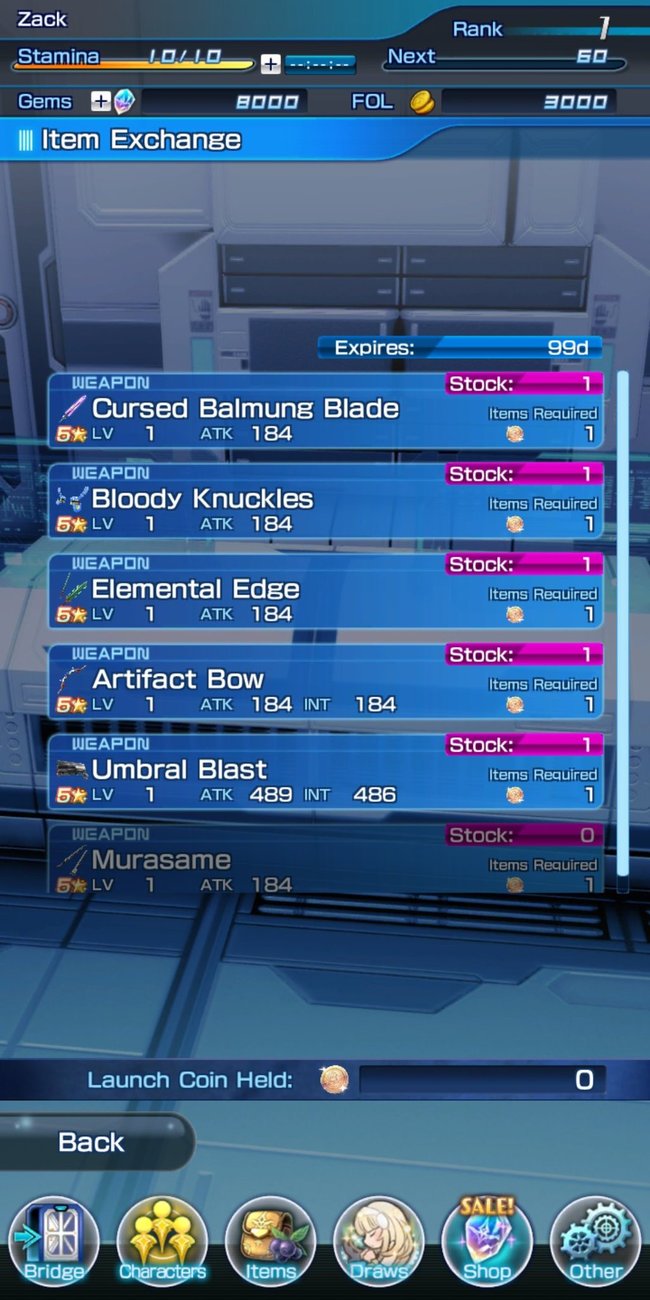 Now, whatever weapon you choose, it won't be locked to your chosen 5-star character. For example, if you have Victor, you can elect to get his weapon, but you can also use the launch token to get Myuria's weapon instead. This is why it's important to grab the weapon according to the character you want to use it with because these also have a unique additional bonus for the starter characters.

How to Farm for Gems

Once you clear a certain part of the game, you will be able to unlock the Maze of Tribulations. These are daily missions that will net you support medals you can exchange for gems. Do these every single day because this will net you a huge amount of gems that you can use to roll for more characters and weapons. Starter Missions and Event Missions are also very helpful (especially the latter since you can get new characters), but I wouldn't recommend wasting any Stamina Tickets since you may need those later on for the more difficult events.

How to Spend Your Gems and Points

Don't spend any gems on weapons until you get to the higher missions because early on, you'll already be wiping out enemies left and right - especially if you went with the same starter party like I did. Once you decide to spend your gems on weapons, use the 10-roll on the character you use the most. You'll likely get at least one 4 or 5-star weapon they can use.

You should also avoid spending any points on enhancing your weapons right away, mostly because they require a lot of points to do so. I would instead recommend selling off your 1 and 2-star weapons for money because they don't give a good enough boost to make them worthwhile, but keep the hammers since they offer enhancements. Of course, after a couple of weeks of playing, you'll have so much Fol (the game's currency) that this won't be an issue, anyway.

What to Buy from the Shop

Unless you're a mega-whale, you shouldn't purchase any gems from the Shop. There's really no reason to do so because the game is very generous in gifting players with additional gems. Plus, just doing events will net you a ton anyway. 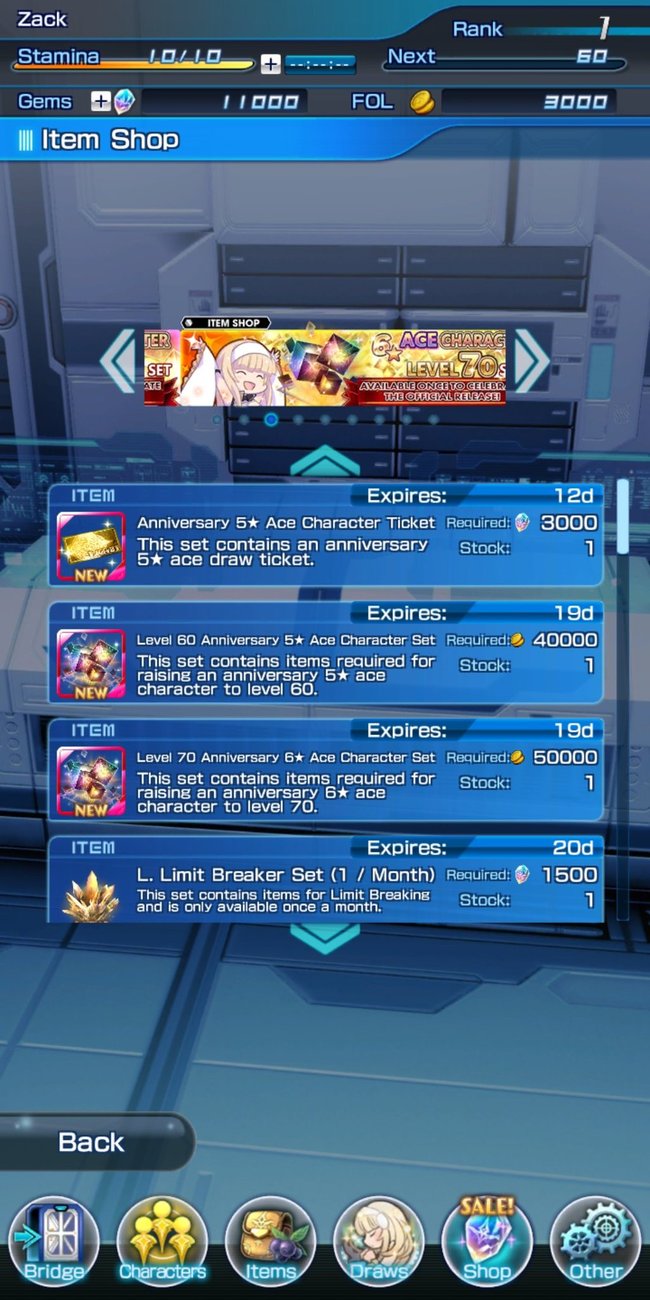 Instead, go to the Item Shop and buy the Ace Ticket and the 5-star and 6-star ace character set items, which cost quite a number of gems. The Ace Ticket will basically allow you to automatically summon a random 5-star character from the Draw menu.

Where to get the Barrier Blaster

The Barrier Blaster is an item in Star Ocean: Anamnesis require to access certain side missions found on the second and third planet (or chapter) of the game. You'll receive your first Barrier Blaster from completing mission 2-30 on the second planet. Keep in mind that Barrier Blasters are consumed upon use and you will need to acquire more in order to complete the remainder of these unique missions. 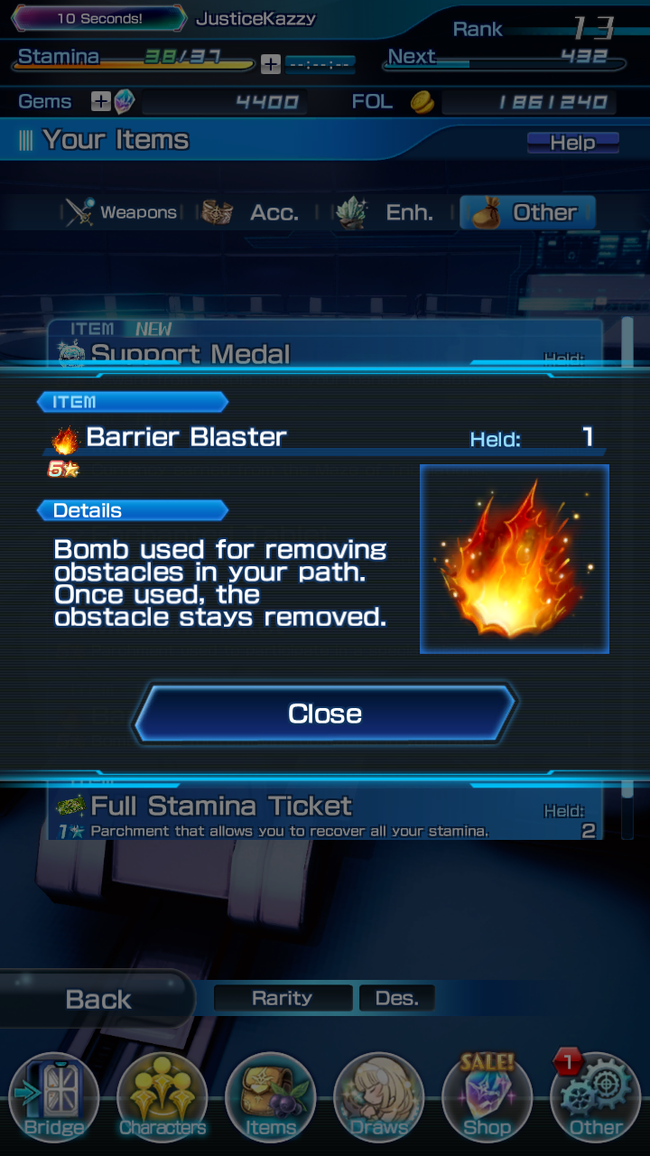 Natural progression through Star Ocean: Anamnesis' story will reward you with Barrier Blasters, but you can also find them in the Shop. Through the Item Exchange feature you can also redeem Legacy Gerel Coins from the current Eliminate the Gerel Horde! Event found in the Event tab (this is as of 07/13/2018) for 2,000 of this unique currency.

Star Ocean: Anamnesis is headed to the west

Star Ocean: Anamnesis Interview - A Look Into the Global Release

2B from NieR Automata arrives in Star Ocean: Anamnesis