Cadence of Hyrule Lost Woods guide: using the Tingle Dowser to get through the Lost Woods

In almost every Zelda game, the Lost Woods is a labyrinthine nightmare, one that you'll never find the way through without knowing its secret. Cadence of Hyrule, the Zelda spin-off based off Crypt of the Necrodancer, is no exception, with traversing the woods at all something of a puzzle in itself.

Thankfully, we have you covered! On this page we'll detail how to get through the Cadence of Hyrule Lost Woods - and for it, you'll need a new item, the Tingle Dowser... 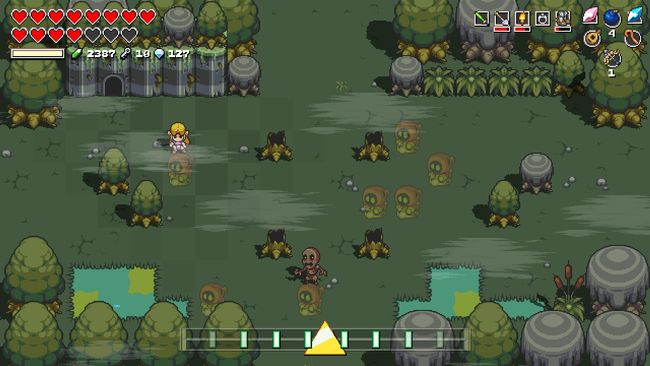 Navigating the Lost Woods in Cadence of Hyrule

In order to get through the Lost Woods in Cadence of Hyrule, you'll need a specific item. In true rogue-lite fashion, the world map for the game changes with every new file, so not only will the general location of the Lost Woods change, but the way through the woods will change as well. Unlike in many other Zelda games, we can't simply tell you what direction to head in. It's random.

You can try to figure out the directions on your own, but for the smoothest time you'll want to just obtain Tingle's Dowser - a key item for solving the riddle of the Lost Woods.

Grabbing the Tingle Dowser for the Lost Woods

When you first enter the Lost Woods, there will be a cave nearby with Cadence waiting for you. As an aside, you should talk to Cadence here - doing so is part of how to get her via the Cadence of Hyrule playable character unlocks. Anyway - back to the Tingle Dowser...

From this first screen, you'll need to head either north or south one screen, depending on what way your World Map seed decided was the way to go. If you head the wrong way, you just exit the Lost Woods completely and can easily re-enter, so no need to worry too much.

On the next Dark Woods screen, you'll see a bunch of mushrooms, as well as a stump you can enter. Upon entering the stump, you'll find Tingle sleeping. Solving the music puzzle will wake Tingle up, and you'll receive the Dowser.

There's more to Tingle than just getting the Dowser, though. Make sure to return to him later to turn in Deku Seeds for various rewards. 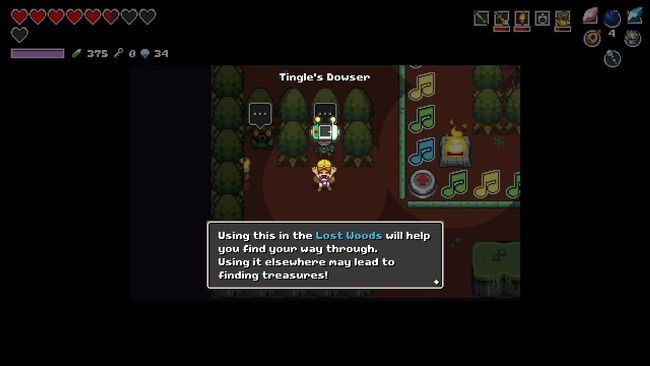 With Tingle's Dowser in hand, you can now navigate the Lost Woods! But how? The Dowser works with the vibration functions on your controller to let you know where to go next. Stand near an exit and use the Dowser--if the vibration ends up being two weak rumbles, that is not the way to go. If you feel four heavy vibrations, move forward! In no time you'll find the Lost Swamp and be able to tackle the dungeon.