It’s no secret that the developers over at miHoYo have made the inspiration for their upcoming project quite obvious. Much like how their previous title, Honkai Impact 3rd, looked to Bayonetta for its core gameplay, Genshin Impact hides no subtlety in its admiration for The Legend of Zelda: Breath of the Wild. 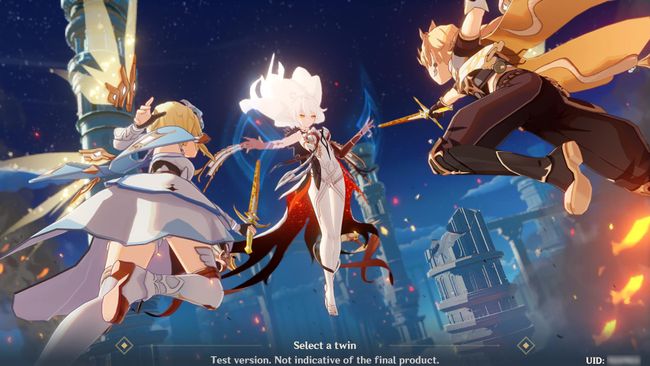 Genshin Impact has players select one of two twins at the beginning cutscene. These two wielded the power to travel between worlds until they encountered a goddess that took one of them captive and stripped the other of that power. The story in the closed beta begins roughly two months after that and your main character is still searching for their sibling in the new world of Teyvat that they were dropped into.

I wasn’t prepared for how similar navigating Genshin Impact would be compared to Breath of the Wild. My character, who I named Latooni, had a stamina bar that depleted any time I ran, swam, or climbed anything. Almost all surfaces in Genshin Impact were pretty much climbable. It feels insanely similar to how Breath of the Wild handled and presented it. Uncovering parts of the world map didn’t have me climbing big towers and spotting key landmarks though; Genshin Impact’s equivalent has smaller statues that’ll do it instantaneously, but you can also invest resources to level them up for rewards. 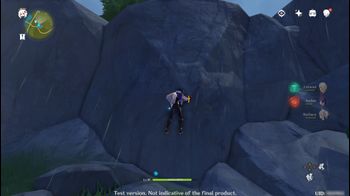 Fear not, you can still climb when it's raining in Genshin Impact unlike... a certain other game.
The first city locale you run into, Mondstadt, was especially fun to explore because the stamina bar’s initial length allowed me to climb a good while before completely exhausting itself, so I was making my way to the top of windmills and tall buildings in no time. I even got a glider fairly early in to cover more ground on my way down and land safely. Yes, there’s falling damage.

If your favorite part of Breath of the Wild was climbing around, Genshin Impact will sufficiently scratch that itch. There are a lot of areas that rewarded my trek to scale them with a treasure chest or collectible. Several areas had some creative vertical design to utilize the landscape’s sense of scale effectively. For instance, a statue was located on a small floating island next to a mountain off into the distance. I meticulously planned my route to make my way there. Shortly after, I found myself trying to solve a puzzle in the surrounding area climbing other mountains nearby to find rotatable light beacons that linked to a central tombstone. Genshin Impact certainly aims to capture that Breath of the Wild experience of sparking a player’s curiosity by including areas of interest throughout the land that’ll capture their eyes as they wander about.

Another aspect in Genshin Impact that clearly evokes Breath of the Wild is its general world design and structure as I was randomly roaming around. It already has a fairly sizable open world to run around in, but it’s only one landmass that’s mostly filled with wide open grass fields; I’m hopeful that its final release will include more biomes to discover. Much of what I saw included goblin-esque enemy camps huddled around a locked treasure chest, tattered ruin structures that may have been from an advanced ancient civilization with high-level stone creatures on patrol, and campfires to cook the ingredients I have on me. Luckily, limited inventory space hasn’t been an issue at all yet, even after amassing a wide array of items several hours in. 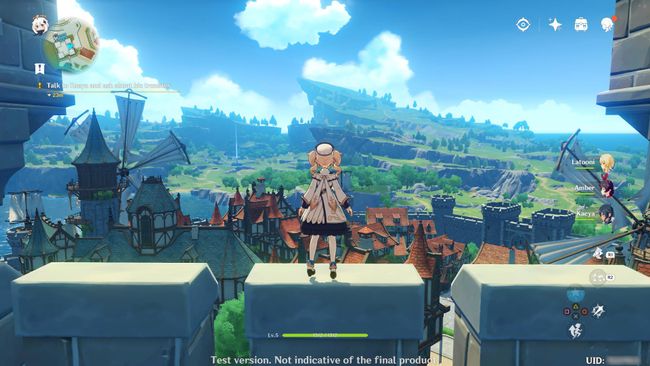 So you may be thinking with all these comparisons to Breath of the Wild, does Genshin Impact have enough of an identity to stand on its own? I’d say so, but a good chunk of it is building off of similar systems they’ve employed in Honkai Impact 3rd. The main differences between Genshin Impact and Breath of the Wild lie in plot progression and combat.

Genshin Impact unfolds in a linear fashion. There’s no point where it opens up and you can have your character race to the final area of the game. You have a main storyline to follow and characters that’ll “join” your party and become playable themselves. It’s presented in an odd manner because you can switch out your main character to another character that has formally joined your party at any time, but the story often doesn't account for it. 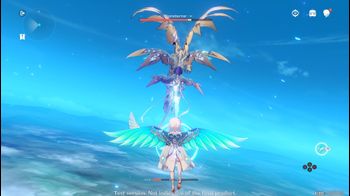 miHoYo often likes to inject sections that are entirely different genres in their games; Honkai Impact 3rd's events are full of them and Genshin Impact has moments of it as well.
To give you a better picture of what I mean, you earn some characters early on by doing a dungeon that serves as a tutorial of how to use them. Let’s take Kaeya, a swordsman who can use ice skills, and enter the dungeon where you control him for the first time. You learn how his ice skill can freeze enemies made of water and also make icey pathways on bodies of water. After you’re done, the game will tell you that he has joined you and you can switch to him at any time now - but in the actual story scenes itself, Kaeya will be waiting for you back in town to give your next quest. I don’t mind all that much because much of what I enjoyed in my time with Genshin Impact revolves around using lots of different characters and seeing how they mesh with one another in combat, but it was awkward to discover as I was still wrapping my head around it all.

The real charm of Genshin Impact, to me, is its battle system. There’s a fundamental difference in how the overall game feels when you start accruing more characters and face off against foes. Parties only support up to four characters and only one of them will be out at any given time, but you can switch to any of them nearly instantaneously at any time. Although they aren’t all physically out on the field at once, it feels manageable because you have total control of what kind of chaos you want to unleash and believe me, there’s a lot of interesting things you can do with the proper setup.

I learned very early on that Genshin Impact places great significance on environmental interactions. Latooni comes equipped with a wind spell from the get-go that spews a tornado to carry off enemies. I met an archer named Amber who had the ability to shoot fire arrows that can, of course, set enemies on fire and also set the ground on fire. So if Latooni’s tornado interacts with fire, it’ll become a fire tornado instead that deals a lot more damage on enemies and also inflicts the burn debuff as well. Kaeya, as I mentioned earlier, normally can only freeze enemies made of water but Barbara can make enemies wet with her normal attacks, so Kaeya can freeze any enemy thanks to her. There are even more minute interactions depending on an enemy’s placement in the environment. If they happen to be in water, electric spells will damage all of them at once. 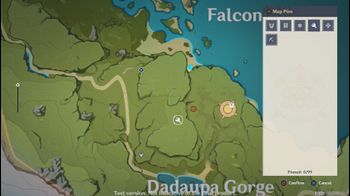 You can set different icons for waypoint markers you place on the world map to remind yourself of what kind of area you've marked, just like... you know.
Some specific character mechanics may even help enhance each other’s movesets. One of Bennett’s abilities had him do a devastating sword combo but it knocked him back on the final hit. I happened to have a different character that had a skill which placed a shield around them that mitigated damage for a limited time. Applying it and switching back to Bennett got rid of the knockback as a result. It’s little things like this that excites me about Genshin Impact’s potential. Also, miHoYo has stated that Genshin Impact will support online co-op and this game is shaping up to be an amazing experience with others. I didn’t get the chance to try it out myself.

Genshin Impact has all the bells and whistles you can expect when it comes to RPG progression systems. Characters level up, get new weapons, and enhance their abilities. Leveling organically by defeating foes does feel sluggish though without making use of the experience item rewards you get here and there. Weapons have a star-rarity rating and you can level them up too to make them stronger; duplicate weapons of the same kind will enhance the stat modifier on their abilities. While a weapon’s different appearance does reflect on a character’s model, the way characters carry them around are weirdly the same. Weapons all seem to float across a character’s back as they travel around, much like how 2B wields her swords in NieR: Automata. There are no traditional armor sets in Genshin Impact as far as I know; instead, characters can wear Artifacts that function as armor with matching set bonuses but it doesn’t reflect on their physical appearance.

I suppose what concerns me most is how miHoYo plans to monetize Genshin Impact in its final release. They haven’t shared any details on how they plan to go about this yet, since they’ve shared that Genshin Impact will be distributed as a free-to-play game. Many of the systems in this closed beta test may or may not be in its final release, but I figure it’s important to document them either way. 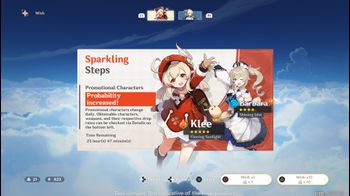 I was a bit surprised to see limited time gacha banners in the closed beta test. It may not be indicative of how the final release will be structured, but it does leave me a tad worried.
There are banners to roll for characters, weapons, and special closed beta test shop currency in this Genshin Impact closed beta. As of the moment, there is no way to spend real money in the game. Players testing it through this period all receive daily rewards through the in-game mail that grants currency to roll on limited-time banners that feature specific characters on rate-up, meaning that there is a higher chance to obtain those characters in that period of time. While players do receive certain characters by advancing the main story, it seems that a good chunk of characters is obtained by rolling them through the gacha. I’m not entirely sure if there are other alternative ways to earn them at the moment. I imagine, if it follows Honkai Impact 3rd’s model, that there might be another method but it’ll be a time consuming one.

Nevertheless, I really did enjoy the good handful of hours I spent with Genshin Impact and look forward to its final release. I hope it’s monetized fairly. I’ve been playing the PC version so far; it looks fantastic and runs at a smooth 60fps. It will also come out for PS4, Switch, and smartphones. I’ve seen some footage of the game running on a phone and it’s quite impressive to see that game of this scope and magnitude runs on them. There’s a lot to look forward to with Genshin Impact and just might be miHoYo’s next big hit.

In the mean time, I took a lot of pictures in the early parts of Genshin Impact so enjoy the gallery below.

Genshin Impact is coming to PlayStation 4 next year

Genshin Impact showcases the region of Liyue in a new trailer